The Gender-Fluid Tomato: Yes, You Read That Right 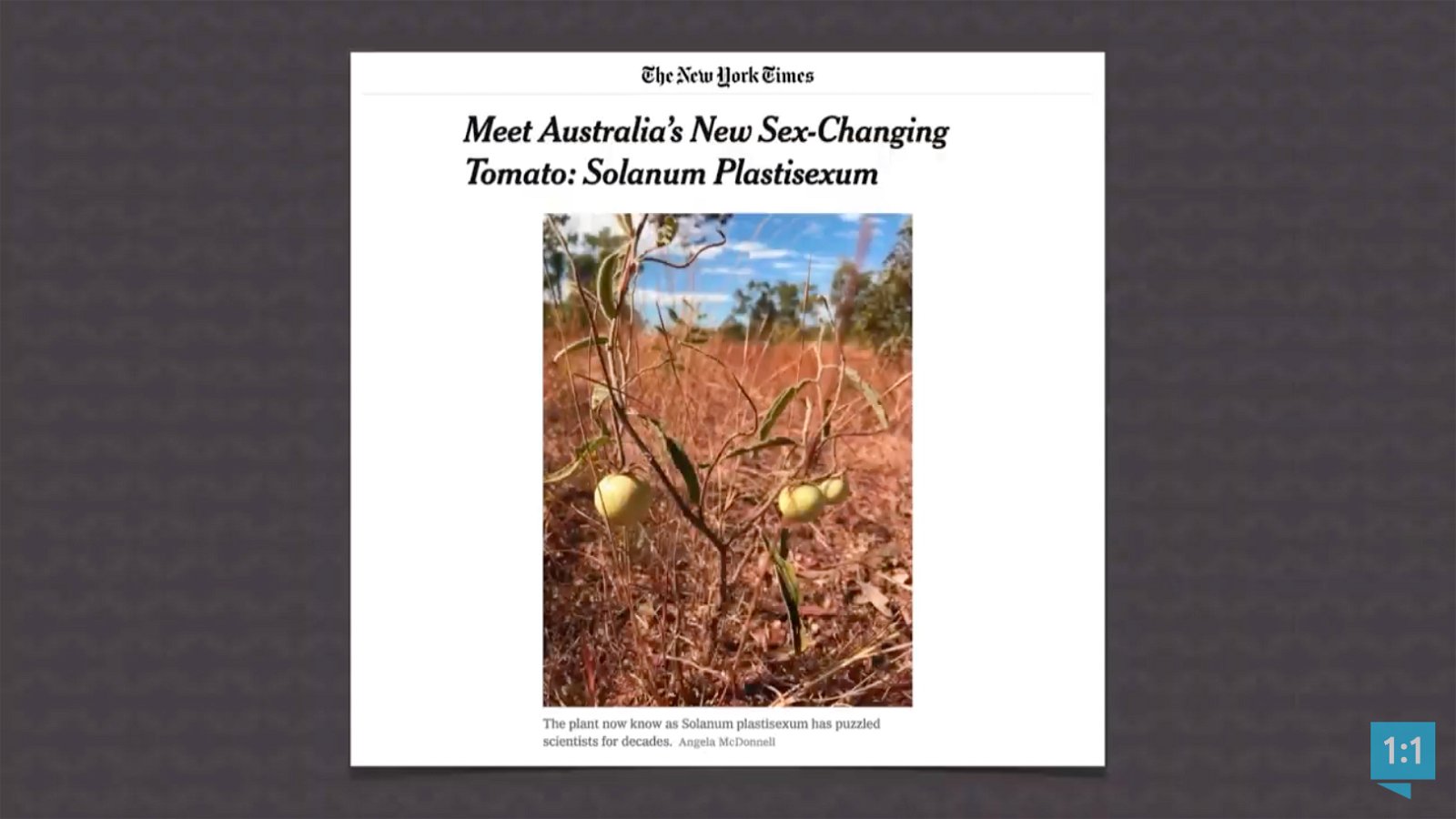 I’ve written about a lot of strange things on this blog, but I never thought gender-fluid tomatoes—from Australia, my home country, no less—would be one of them. But that’s where our culture has ended up—having a discussion about how a strange plant, a species of bush tomato from the Outback, somehow shows that the “sexual binary” is “a fallacy.”

Various reproductive strategies are God’s designs to help organisms continue to reproduce, ensuring the survival of their kind, in an ever-changing fallen world.

The researchers, however, go further than just describing the plant and naming it Solanum plastisexum. They go on to say, “When considering the scope of life on Earth, the notion of a constant sexual binary consisting of distinct and disconnected forms is, fundamentally, a fallacy.” So, because a plant—which belongs to the plant kingdom because plants are so different from everything else—has unique forms of reproduction, that means that the “sexual binary” (male and female) we see elsewhere is nothing but a fallacy.

Of course, from an evolutionist perspective, there is a biological connection between us and tomatoes. In their view, all life is related and goes back to some primeval soup, so evolutionists do believe humans are related to tomatoes.

Now, absolutely, we see some interesting and even puzzling reproductive strategies in nature, even outside the plant kingdom (i.e., some animal species can switch from being male to female). But this in no way demonstrates that gender is on a spectrum, as so many people today believe and what these researchers seem to be hinting at. It’s ridiculous even to suggest this.

Various reproductive strategies are God’s designs to help organisms continue to reproduce, ensuring the survival of their kind, in an ever-changing fallen world. But, with each of these species that reproduce strangely, there is a biological response to some environmental stimuli (researchers aren’t sure what that stimulus is for Solanum plastisexum). It’s not the “feeling” associated with the transgender movement and the new idea that gender is not binary. With Solanum plastisexum, we’re talking about biology—plant biology—not simply someone’s feelings and perceptions about human gender.

No matter how many weird tomato plants they find, biology and genetics will continue to confirm that humans are male and female. And, more importantly, morality is not determined by looking at the plant or animal kingdom. We see all kinds of horrible things in nature: cannibalism, infanticide, parasitic behavior, female creatures eating their mate, and more (all part of the curse due to man’s sin (Genesis 3:15)). Are these scientists suggesting humans should copy these too? To use something like sex-changing tomatoes to make claims about humans and morality is ludicrous.

Morality comes from God and his Word. It’s the only unchanging foundation. Anything else—including nature as a supposed moral compass or example of moral norms—is just an arbitrary opinion. And God’s Word is abundantly clear when it comes to humans: we were created male and female (Genesis 1:27).

Dr. Georgia Purdom discussed this item on Answers News with cohost Avery Foley. Answers News is our twice-weekly news program filmed live before a studio audience here at the Creation Museum and broadcast on my Facebook page and the Answers in Genesis Facebook page. We also covered the following topics:

Watch the entire episode of Answers News for July 1, 2019.