by Dr. Elizabeth Mitchell on May 12, 2012
Share:
Email Using:
Gmail Yahoo! Outlook Other

Collodictyon, a protozoan from sludge in a lake near Oslo, is in the headlines because researchers believe it represents a brand new—or rather an extremely ancient—branch on the evolutionary tree of life. They do not believe it fits into any of the existing biological kingdoms.

Collodictyon’s genomic analysis does not match known genomes. Furthermore, Collodictyon itself has intracellular structures resembling those of several different microbial categories. “Collodictyon shares cellular characteristics with Excavata [single-celled parasitic protozoans] and Amoebozoa, such as ventral feeding groove supported by microtubular structures and the ability to form thin and broad pseudopods,”1 the authors write in the journal Molecular Biology and Evolution. Kamran Shalchian-Tabrizi of Oslo’s Microbial Evolution Research Group says, “This further supports the hypothesis that the species from this lake belongs to a primordial group. Perhaps it descended from the antecedents of both the excavates and amoeba?”

“It evolved around one billion years ago,” Shalchian-Tabrizi says. “We have found an unknown branch of the tree of life that lives in this lake. It is unique! So far we know of no other group of organisms that descend from closer to the roots of the tree of life than this species. It can be used as a telescope into the primordial micro-cosmos.” 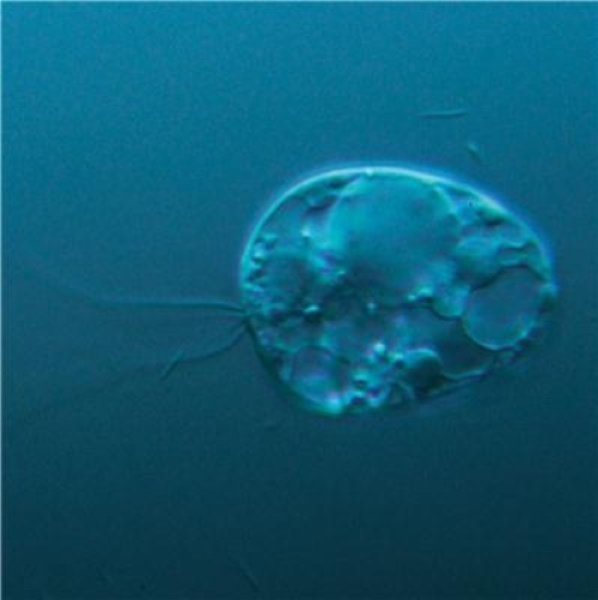 Collodictyon is unusual because it has four flagella for locomotion, can form pseudopods like an amoeba, and consumes its food through a groove like a paramecium. Evolutionists say it offers a “glimpse into primordial times.” Image by UiO/MERG, via ScienceDaily.2

Though genomic matches suggestive of common ancestry are absent, researchers are confident they just mutated away long ago. Shalchian-Tabrizi explains, “It is often the case with such ancient organisms that features they share in common with other known species have been wiped away from the DNA sequence because of long-term mutations.”

Evolutionary scientists believe eukaryotes (organisms with nucleated cells) can be divided into those with two flagella, like algae and excavates, and those with only one, like some amoebae. Humans are classified as descendants of the amoebae because the human sperm has a single flagellum. But the Collodictyon has four flagella, fitting into neither category. That, along with the lack of genomic matches, earns it its own branch on the evolutionary tree of life.

Biological classification schemes are periodically modified to accommodate life forms that don’t fit easily into existing categories. Separate kingdoms for prokaryotes (bacteria and blue-green algae) are based on observable distinctions: those microbes have no nuclei. Protozoans (like the paramecia and amoebae schoolchildren find in pond water) and fungi have also occupied their own kingdoms. These categories reflect observable characteristics. But in recent years, schemes seem to have diversified more rapidly than the organisms they categorize.

Classification schemes are being modified to reflect genomic analyses. Why? Not to provide a descriptive system grouping similar things but to build a system in which unobservable evolutionary inferences about ancestry are reflected in the branches. In other words, organisms in the same branch should share the same ancestor.

Shalchian-Tabrizi, explaining “how the tree of life can provide fundamental answers to great evolutionary mysteries,” says, “In order to understand what a species is today, we have to understand how they have changed genetically. The tree of life allows us to explain cellular change processes by connecting the genome and morphology (appearance) with its way of life.”

The researchers also place this protozoan in its own kingdom category on the basis of its unusual genome. Since it lacks genomic information matching even parts of its supposed descendants, the absence is considered a consequence of DNA changing over time. Thus, if some matches were present they would “prove” Collodictyon’s ancestral place, but since they’re not there the researchers assume the matches used to be there but went away. This seems to be an example of choosing a conclusion and insisting the evidence supports it.

This study bases its conclusions on evolutionary assumptions. Discovery of greater biodiversity—such as a protozoan that moves with four flagellae, eats through a groove like a paramecium, and forms pseudopods like amoebae—is a fascinating mosaic of observable characteristics. But the presence of different sorts of microbial features does not show Collodictyon has an evolutionary relationship to multicellular organisms. This study increases our knowledge of microbial diversity but does not lend support for molecules-to-man evolution.

Previous Article “Come Now, and Let Us Reason Together,” Says the Lord Next Article News to Note, May 12, 2012