on September 1, 2014
Featured in Thinking Outside the Box
Share:
Email Using:
Gmail Yahoo! Outlook Other 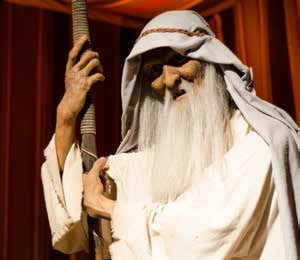 An animatronic exhibit of the pre-Flood biblical character of Methuselah is one of the highlights of a tour of the Creation Museum.

Skeptics of the Bible will claim that early men just didn’t know how to count, or that they counted years differently from “modern” men. Those who take Genesis literally, however, accept the numbers as being accurate. Still, we have to wonder how men could have lived so long back then.

One common explanation given to explain long lives is a supposed vapor canopy that helped block the effects of harmful cosmic radiation. But a careful reading of Genesis 1:6, which mentions a firmament (or expanse), does not really describe a canopy. A probable cause for shortened lives may be the accumulation of genetic mutations. That, however, would take many generations and might not explain the sudden 300-year drop in lifespan from Noah to Shem.

Another possible reason for shorter lives after the Flood was a change in diet. God originally created man to live on a vegetarian diet (Genesis 1:29). That being so, God would have provided plant-based foods perfectly designed to sustain long human lives.

The Flood was a pivotal point in history that ruined more than we might imagine—and changed everything that followed. Did the Flood destroy many of these life-sustaining plants, or were the plants that Noah brought with him not able to thrive in the post-Flood world or did they lose some of their pre-Flood nutritious value? Is this why God, in Genesis 9:3, suddenly changed man’s diet to include meat?

Previous Article Was Noah’s Ark Round? Next Article More Than One Language Before the Flood?