on May 16, 2013
Featured in Thinking Outside the Box
Share:
Email Using:
Gmail Yahoo! Outlook Other

In Noah’s case, God had told him exactly what to prepare for: nothing less than an end-of-the-world-as-he-knew-it Flood!

Preppers. You hear the word many places these days. Even National Geographic TV has produced a weekly program about people preparing for a disaster, whether it is another Katrina-size hurricane, a Sandy-size storm, a power grid failure, or “the end of the world as we know it” (popularly abbreviated TEOTWAWKI).

Fearing the unknown, Preppers stockpile food, water, blankets, fuel, and even ammunition. They don’t know what sort of disaster is coming their way. All they know is they have to cover all their bases.

Solomon tells us there is nothing new under the sun (Ecclesiastes 1:9), and that includes prepping. Think back to Noah’s day. Noah can be called the world’s first Super Prepper! In Noah’s case, God had told him exactly what to prepare for: nothing less than an end-of-the-world-as-he-knew-it Flood! And it wasn’t just his family he had to consider, but the two thousand animals God placed in his care inside the mighty Ark.

How did Noah prepare for something like a worldwide Flood? First, he put his hope in God, not in food, blankets, or weapons. And then he considered the things he would need in a world populated by only eight people, with little diversity of skills, and no infrastructure to support the technologically advanced civilization he was used to.

We can only speculate how Noah planned for his end of the world as he knew it. Your plan can include a visit to the future Ark Encounter to see how he might have provisioned the Ark, and his family, to build a new world. 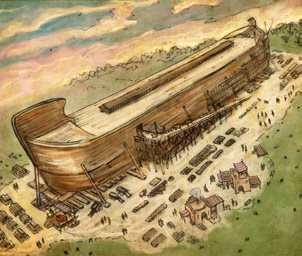 This Ark Encounter rendering depicts some of the supplies Noah and his family gathered for their year-long voyage.