on June 10, 2014
Featured in Thinking Outside the Box
Share:
Email Using:
Gmail Yahoo! Outlook Other

The account of Noah is found in Genesis 6-9. Despite living in a wicked time, Noah faithfully followed God, and he and his family were the only ones spared aboard the Ark from God’s judgment during the global Flood. All of humanity traces their ancestry back 4,350 years to Noah’s sons.

When God sealed Noah and his family inside the Ark, He closed the door on Noah’s world forever. Noah emerged a year later to a new world, devastated by a global Flood, where he and his sons had the chance to build something afresh. If he did it correctly, it would be a world that honored the Creator.

Well, we know how that turned out—badly. But for a moment, let’s recall that old, sin-filled world Noah left behind.

When we think about the time before the Flood, what comes to mind? For many people, it’s images of streets filled with violence, murders, and rampant immorality. All probably true, but do we ever consider what Noah thought of his world? It was, after all, the only one he’d ever known.

To try to understand what might have gone through his mind, let’s ponder what Noah left behind. A comfortable home? A mother? Brothers and sisters, aunts and uncles? Close friends? Have you thought about those possibilities? 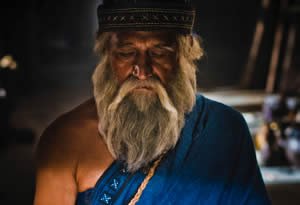 The Ark Encounter will depict Noah as a man of righteousness (2 Peter 2:5), not the sociopath seen in the new Noah movie.

Want a Bible-based review of the new Russell Crowe film Noah that documents the movie’s blasphemous representations of God and its depiction of Noah, a righteous man, as a psychopath? Learn how Noah the film distorts the Bible and is leaving a terrible legacy in the culture regarding the authority of the Bible.

Noah was 600 years old when God sent the Flood. It’s possible that he left behind a large extended family of siblings, nieces, nephews, aunts, and uncles. How would you feel?

This was undoubtedly a traumatic time for the Noah family, filled with fear and sadness on the one hand and hopes for a better world on the other. Remembering that “Noah the hero” (not like the character depicted by actor Russell Crowe in the new Noah film) had the same emotions as you and I have today helps us to better understand Noah the man.

Previous Article Counting Kinds Next Article Was Noah’s Ark Round?