Why “Evolution in 90 Seconds” Video Is Just Art

In October 2015, this dazzling video made its way onto many Internet search engines and on the walls of social media:

The author, John Gurche, is said to have used this video to act “as sort of a teaser”1 for his new book, Shaping Humanity: How Science, Art, and Imagination Help Us Understand Our Origins.

Much can be said about what is being portrayed in the words chosen for a title. The object of this title seems to point to how we humans can understand our origins and how science, art, and imagination can help us find the answer. The question that needs to be raised is how much “science” is in the video and the subsequent book? One can easily see the “art” and “imagination,” so let’s start there.

Most of us enjoy art and can easily discern how much of the art reflects imagination and how much reflects reality, and can relate the art to a reality that is non-imaginative.

For example, the following is a drawing. I know that it reflects reality because I personally know, see, and even travel with what it is representing: Steve Ham, the director of AiG International. His very talented son drew him. 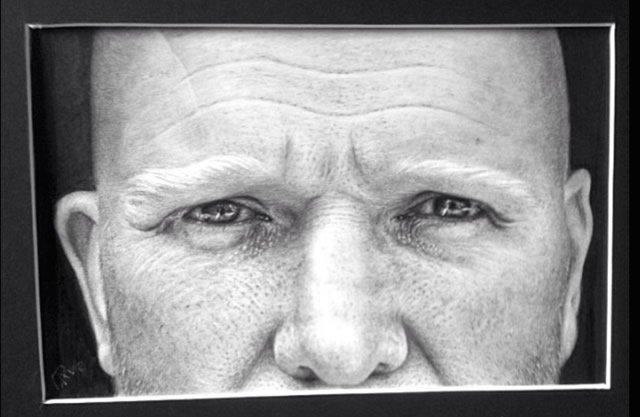 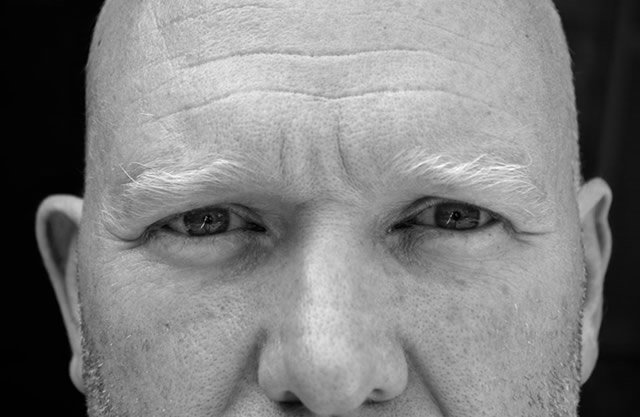 There is, nonetheless, a more abstract form of art. A great percentage of the art world reflects more of the imagination than reality. A great misunderstanding occurs when we fail to distinguish between reality and imagination and fall into the error of relativism, wherein reality becomes, at least a version of it in the mind, subject to imagination.

One of the contemporary examples most recognized is Picasso. 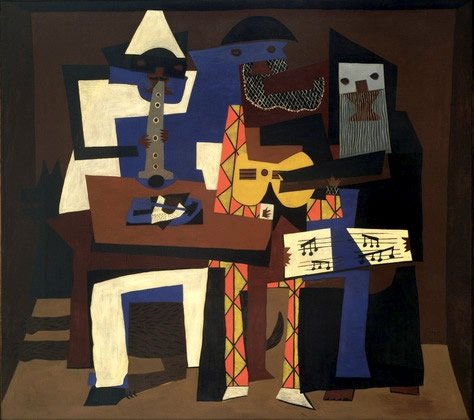 Pablo Picasso, “The Three Musicians.” By the Museum of Modern Art through Wikipedia.

These paintings are illustrating a mix of imagination and the real world. The skewed and confused perception of reality seems to portray the non-visible, subjective feelings of the artist.

Although an argument could be made that there is an element of imagination in all art, which is true, there is a range of how much artistic license can be afforded before the message given by said reality is lost. Therefore, the first image (Steve) can be linked back to the real Steve because it is more representative of reality, but the second image is filled with imagination, subjectivity, and distortion. That said, the admirer of the first image has more liberty to come to his or her own conclusion about Steve, but the admirer of the second image has to battle his or her way through the subjective interpretations of the artist to grasp the reality that it is based on.

With that in mind, upon observing the ape-man-to-human video, how can it sustain such a title? I see the art. Do you? I also see the imagination and subjectivity. Do you? Where, though, is the objective, observational “science”? It is found at the beginning and the end of the video, but nowhere in between, especially not in the underlying suggestion that the video, as a whole, is making.

There are only these: 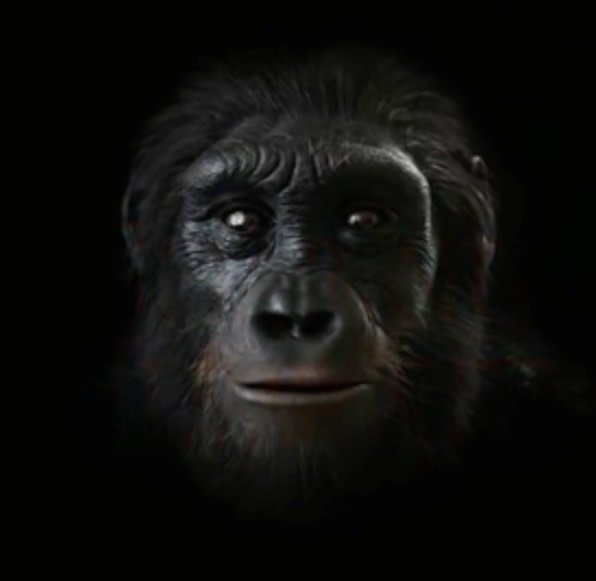 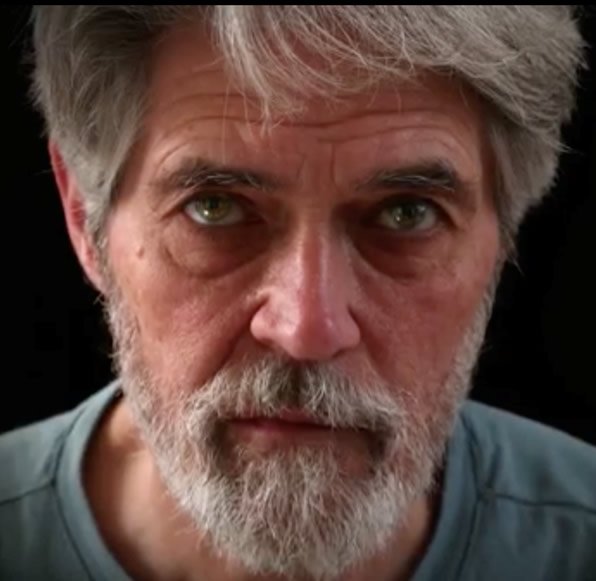 The supposed common ancestry between the two in the long, very long, imaginative story of life itself has been conjured up by some men and women that establish human autonomy for their basis of authority on things of the past.

To look into how unscientific this really is, please read “Did Humans Really Evolve from Apelike Creatures?” by Dr. David Menton, who for 34 years was an associate professor of human anatomy at Washington University School of Medicine in St. Louis and now is a full-time speaker and researcher at Answers in Genesis.

So we do agree with the title and recognize the aspect of art and imagination, but we need to put the “science” in all of this under some scrutiny. We need to realize that this supposed evolutionary story of mankind is not a scientifically proven fact that many Christians are ignoring, but is only a fraction of an imaginary model of the origin of life itself in what is widely known as the Evolutionary Tree of Life. This “tree” is full of imaginative, artful drawings but has no basis in real scientific fact.

Another drawing as part of this “tree” is seen below.

Let’s let Dr. Bernard Wood, evolutionary anthropologist at George Washington University, weigh in with how much science is in this and similar artistic representations of human origins:

There is a popular image of human evolution that you’ll find all over the place . . . On the left of the picture there’s an ape . . . On the right, a man . . . Between the two is a succession of figures that become ever more like humans . . . Our progress from ape to human looks so smooth, so tidy. It’s such a beguiling image that even the experts are loath to let it go. But it is an illusion.2

Yes, it is not only an illusion, but it is deception, which leads people to think that Genesis 1–11 and the gospel based in that history are a myth and that they are just animals and accidents of evolution with no moral and spiritual accountability to God, because (they think) He doesn’t exist. And what would be the great motive in this deceptive plot? In other words, why would people want to find an origin apart from what was given to us in Scripture? As the poet Francis Thompson wrote after his running from God through his previously unregenerate, opiated, hazed mind and heart:

We are fleeing Him who told us that we are His special creation:

Then God said, “Let Us make man in Our image, according to Our likeness; and let them rule over the fish of the sea and over the birds of the sky and over the cattle and over all the earth, and over every creeping thing that creeps on the earth.” God created man in His own image, in the image of God He created him; male and female He created them. (Genesis 1:26–27, NASB)

Then the Lord God formed man of dust from the ground, and breathed into his nostrils the breath of life; and man became a living being. (Genesis 2:7, NASB)

You see, we don’t have to continue to flee from the truth that humanity is a special creation of God. We don’t have to abhor that we are created in God’s image, in His likeness, and therefore we are accountable to Him. We as humans are to reflect the attributes of God, such as His holiness, kindness, love, mercy, goodness; and we are to obey Him for His glory and our good. We know, though, that all of us do just the opposite actively or passively in our thoughts, words, and actions. The good news is that we do not have to justify our behavior by lowering humans to the status of mere animals, acting on instinct instead of responsibility toward a holy and loving Creator God. We do not need to try, and should not try, to convince ourselves of that evolutionary fantasy derived from much art and imagination plus pseudoscience.

Francis Thompson ended his poem in a marvelous fashion:

Halts by me that footfall:
Is my gloom, after all,


Shade of His hand, outstretched caressingly?
‘Ah, fondest, blindest, weakest,
I am He Whom thou seekest!
Thou dravest4 love from thee, who dravest Me.’5

The halls of many university science and philosophy departments are used by so many to create “labyrinthine ways” in the mind to flee from Thompson’s Hound of Heaven as He pursues those who are at enmity with Him (Romans 5:10; Colossians 1:21). But this is true of all human rationale apart from Christ. Since Genesis 3, mankind in its unregenerate state has been suppressing the truth of God with our unrighteousness (Romans 1:18). That said, although one can glean from Francis Thompson’s poetic insight and extract from Dr. Wood’s revealing admission, both men remain fallible! That is why Answers in Genesis is a creation apologetics ministry that doesn’t depend on any fallible human pursuits, approval, or justification to take God at His Word.

And God said that man is a special creation, distinct from the animals, and was made from the dust of the ground. Man and woman were made in God’s image and likeness, and we are all descended from Adam and Eve. In denying our sin and guilt inherited from Adam and denying God’s perfect holiness and purity we foolishly attempt to disassociate ourselves from God by calling sin “animal instinct” and evil “relative,” or worse, even “good.”

We as humans are not simply animals “dancing to our DNA”6 as Richard Dawkins likes to say. No, we are going to have to confront this disconnect in another fashion. We are going to have to weigh our lives against God’s perfect law as responsible human beings, not savage beasts. And only Jesus and His marvelous vicarious death on the Cross and subsequent Resurrection from the dead on the third day can bridge that gap and restore us to a right relationship with our Creator.