Re-dated Shroud of Turin Gets Its Own App

Re-dated Shroud of Turin gets its own app.

This spring saw a revival of interest in the Shroud of Turin, a 14 by 4 foot linen cloth supposed by many to have been used to cradle the body of Jesus when He was taken down from the Cross or to have wrapped His body for burial. Kept in the Cathedral of Turin for the past four centuries, the linen sheet is noted for red stains thought by many to have been made by Christ’s blood marking the nail imprints on His wrists and feet, the crown of thorns, and the stripes from His scourging.

Though visited by thousands each year in Italy, worldwide public exposure came to the Shroud of Turin in 1898 when it was first photographed. In the 20th century the Shroud became the subject of television documentaries, conspiracy theories, and controversy. Skepticism increased after carbon dating in 1988 reported the Shroud consisted of fabric dating from 1260 to 1390. Publication of data from a recent re-dating of fibers from the Shroud, however, has sparked renewed interest. The new pope, Francis I, recorded a message delivered along with the Shroud’s reappearance on television. Relic-viewing has truly moved into the 21st century as the Roman Catholic Church authorized an app, Shroud 2.0, to facilitate viewing worldwide. 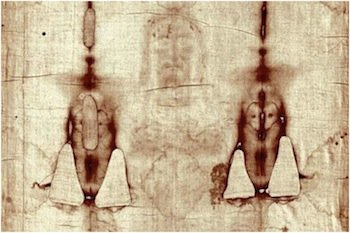 The 14 by 4 foot linen sheet known to history as the Shroud of Turin is purported by many to bear the blood of Christ—still red after two millennia—marking nail imprints, the Lord’s pierced side, and the crown of thorns, in addition to a faint imprint of a long-haired man. Housed in the Cathedral of Saint John the Baptist in Turin, Italy, the sheet has been venerated by millions of pilgrims. The stories surrounding the relic, however, are inconsistent with Scripture. Image: www.history.com

Shroud 2.0 provides a close-up tour of the linen sheet. It illustrates the tour with some applicable verses from the Gospels describing the events of surrounding Christ’s death. The app notes, “Of course, the main problem is the authenticity of the Shroud as (the) burial cloth of Jesus.”

Giulio Fanti, a professor of mechanical and thermal measurement at the University of Padua, reports in his new book Il Mistero della Sindone (The Mystery of the Shroud) that over the past fifteen years he has had material from the fibers extracted in 1988 re-dated by three different laboratories and analyzed the fibers using nondestructive vibrational spectroscopy and several other tests.1 Fanti reports the original radiocarbon dates evidently were performed on contaminants or on fibers used to repair damage from a medieval fire. The revised dates report the Shroud’s fabrics date between 300 B.C. and 400 A.D. Fanti also says his tests confirm the presence of pollen and dust consistent with a Middle Eastern origin.

Believers in the Shroud’s authenticity have never adequately explained how the blood on the sheet has remained red for millennia or how the purported stigmata-on-fabric came to leave their marks.

Believers in the Shroud’s authenticity have never adequately explained how the blood on the sheet has remained red for millennia or how the purported stigmata-on-fabric came to leave their marks. Fanti suggests some sort of “exceptional radiation” rendered the marks indelible and red.

So why do we remain skeptical about the Shroud’s authenticity? Simply this: the Word of God does not back up the story. Scripture nowhere records that any sort of sheet was used to bury Jesus. But Scripture does record in multiple places that strips of linen were used to wrap Jesus’s body for burial (John 19:40 and 20:5–7). Furthermore, Jesus’s head was wrapped with a separate piece of fabric (John 20:7). And as to the assertion that the cloth was only the cloth used to carry Jesus’s body from the cross, we need to note that Mosaic scruples, as laid out in Numbers 19:11–13 concerning the need to purify oneself from the uncleanness of handling the dead, would have prohibited keeping a bloody sheet as a memento of the horror Christ endured.

Therefore, not only is there no known mechanism by which any sort of red stains could have come to be permanently imprinted on a 14 foot long sheet, but there is also clear Scriptural record that other sorts of materials were used to cover Christ’s wounded head and body. Thus, it does not matter whether the Shroud of Turin dates from the time of Christ or the 13th century: there is no reason to associate it with Christ, no matter how old it is.

Moreover, we believe there is no need for physical relics to sustain our faith. We have the Word of God. The Word of God points out “many infallible proofs” of not only Christ’s genuine death but also His genuine Resurrection. There is no need to venerate physical relics to build our faith. Our faith rests in the truth conveyed to us in the Bible.