Last week in Bolivia, AiG held some very full days of presenting creation apologetics talks in the city of Santa Cruz. I trust you will be greatly encouraged as you read a summary of the conference that I shared with our AiG staff Tuesday morning.

Dr. Terry Mortenson and I, along with AiG’s Spanish ministry coordinator and translator Joe Owen, traveled to Bolivia last week for a busy round of engagements. We used another translator, Dr. Jim Harriman, who was born and raised on the mission field in Bolivia and today is the director of development (and an international representative) at the Evangelical University of Bolivia (which organized the conference).

After unpacking, Dr. Mortenson and I headed for a press conference. Three secular TV stations and one Christian radio station were there. The press conference lasted much longer than expected, as the reporters continued to ask questions. They seemed genuinely interested and fascinated by our answers. I wish the American media were as friendly and interested!

Here is a photograph taken at the press conference: 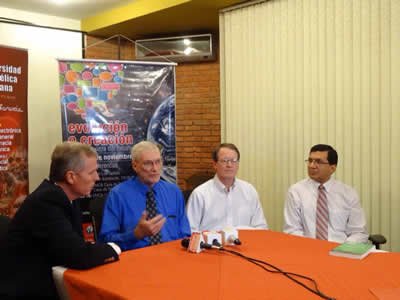 God’s Word as we saw in Bolivia!

Here is a photo taken Thursday evening of the crowd: 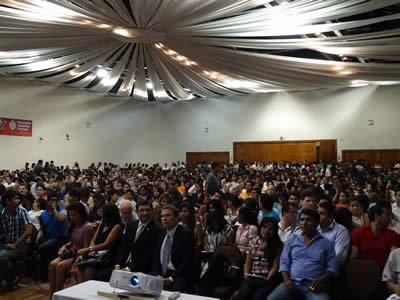 On Friday, Dr. Mortenson and Joe Owen spoke at a church in the morning to about 2,000 high school kids from Christian and public schools. Yes, public school students came to hear Terry and Joe, which is virtually unheard of in the USA!

The organizers didn’t turn the air-conditioning on until about 30 minutes before the meeting on this very hot day. But these teenagers, sitting in an uncomfortable room, were amazingly attentive and quiet, as AiG’s Joe Owen and then Dr. Mortenson spoke to them about biblical and scientific aspects of the creation-evolution issue.

When they were done, there was loud clapping from these teens!

While Dr. Mortenson and Joe were talking to the teenagers, I was set to speak at a luncheon to many of the leading evangelical pastors in the area. One of them is a nationally recognized leader, who shared with me that cultural winds are blowing in his nation (similar to those in the USA) regarding a growing acceptance of “gay” marriage and abortion. The pastors affirmed that our conference had come at a very strategic time in the life of the nation.

Dr. Mortenson was able to join us at the luncheon after he had finished speaking to the teenagers.

I gave a “relevance of Genesis” talk to the pastors, and then we held a question time. One of the questions they asked to be answered in detail concerned the gap theory. Sadly we have seen this compromise view of the gap theory taught around the world in seminaries and Bible colleges as a means of trying to account for the supposed millions of years of earth history. Apparently the gap theory also permeates the church in Bolivia. The pastors were thrilled to understand the problems with this compromise position and understood that it undermines biblical authority! Knowing how to counter the gap theory can have a major impact in the Bolivian church.

Here is a photo taken during the luncheon with Christian leaders: 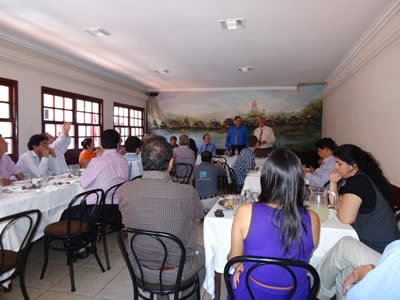 A Biology Teacher Got Answers

A biology teacher at a local Roman Catholic high school came to all the lectures (at the different locations), and she also brought 100 students from her school to the Friday morning session. On her laptop, she showed Dr. Mortenson some of the evolutionist lies that she had to teach about human origins (and other aspects of evolution) at her school. She was thrilled to receive all our Spanish-language slides on evolution and creation, and said she will put them to good use. Terry told her she may face opposition from Catholic authorities (who are almost totally compromised with evolution and millions of years), but she said she is not afraid to use the information we are providing. She was so jubilantly thankful for the lectures and the slides.

There is only one biological race (but two “spiritual races”), and all humans are basically the same skin color—just different shades.

We were excited to see 3,000 people turn out for the two Friday evening presentations. I spoke on the issue of “race” and racism, the six days of creation, and the age of the earth.

Out of all the talks I presented in Bolivia, the one that received applause throughout was the talk I gave on “One Race, One Blood.” I explained to the large crowd that there was only one biological race (but two “spiritual races”), and that all humans are basically the same skin color—just different shades. I challenged the people to stop referring to “races,” but talk instead of “people groups.”

Racism is a hot topic in Bolivia. You see, when the Spanish conquistadors came to Latin America several hundred years ago, they did some horrible things to the Incas and other native tribal peoples. Today, Bolivia is a mixture of Spanish-descent people, Quechua and other Indians, and “mixed race” people. So our talk had a very powerful impact.

AiG Impacting People in the Andes

During my second talk, Dr. Mortenson spent time with a man who attended our International Training Seminar (ITS) at the Creation Museum in 2011. He and his wife have created a beautiful ten-acre retreat center in the Andes Mountains about five hours from Santa Cruz. They can accommodate about 60 students, adults, and teachers for creation seminar weekends—a mixture of lectures and experiences in God’s beautiful creation. They have taught hundreds of people over the past two years, and they have a great vision to expand what they do there.

Sharing the Truth on National Television

On Friday morning, while I went off to be interviewed on Bolivian national television, Dr. Mortenson started a talk at 9 AM at another location. My TV interview lasted 15 minutes, with the interviewer declaring that he was fascinated with the topic of creation and evolution. During the interview he asked me all about dinosaurs and how they relate to what we say about biblical history. In fact, the topic of dinosaurs came up many times while we were in Bolivia. You see, people have been indoctrinated by the evolutionists in this country (as they have around the world). What a great opportunity we had to “de-evolutionize” people’s thinking!

While I was being interviewed on television, Dr. Mortenson began his talk on Noah’s Flood. There were about 500 people at the beginning of the presentation, but then people kept pouring in, and that number soon swelled to around 1,500 people!

Then Creous Ramdath (a creationist missionary originally from Trinidad who lives in Peru with his Peruvian wife Elizabeth) spoke on dinosaurs and the Bible. Creous and his wife have been to the ITS training program at AiG.

There were times during the conference when the organizers asked people to write down their questions for us to answer. They asked the same basic questions we hear all around the world, especially the following topics:

In these two days, the seeds of biblical and scientific truth were planted into the minds and hearts of thousands of souls (a large percentage of them were young people or young adults)—people who had never heard anything like the creation-apologetics teaching we were giving them. Altogether, we spoke to 9,000–10,000 people—and many more through the media, praise God.

One conference leader said that most of the Christians in attendance got more “meaty teaching” at this conference than they probably had received in attending church for many years. The Bolivian church is growing rapidly, but there is so much shallow and even erroneous teaching—and emotionalism—in its evangelical churches (indeed, in all of Latin America, I’ve been told). Many people talked to us personally (most of them through an interpreter) to say that they were so thankful for the apologetics teaching. Lots of people (including numerous young people) lined up after our sessions to ask questions, take photographs, and even ask for autographs. Here is a photo taken after one of the meetings: 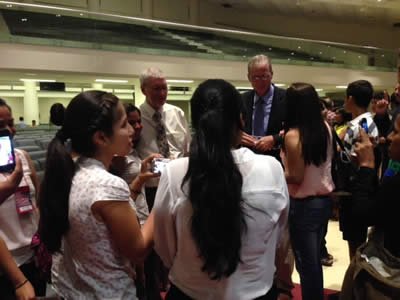 This conference was a great opportunity for the Evangelical University of Bolivia to encourage Christians to study there. The EUB has about 2,300 students seeking a diverse number of degrees; half the student body is actually non-Christian. It is clear that this school is a very, very strategic ministry in Bolivia in many ways, not the least of which is that its president (who organized this conference) is extremely influential in higher education in the nation.

Only God knows what the ripple effects of this conference will be, not only in Bolivia, but in the rest of Latin America (some people at the conference were from other countries). That includes the distribution of resources that people purchased and will bring back to their areas. Also, we hope the conference attendees will avail themselves of future resources that AiG will be producing in Spanish. We will build on this momentum in Cancun, Mexico, in January as we conduct a major AiG conference there.

Thanks for your prayers. And may God be praised for all He did in Bolivia.

By the way, please pray for our outreaches in the United Kingdom that start this Friday. You can see my schedule on our outreach site.