Do cartoons have a place in Christian ministry?

I am disappointed to see cartoons,is my Saviour a joke to you ? I witness on the streets using your material,and have your car stickers on my vehicle,but the gospel is serious,not to be joked about.

Thank you for contacting Answers in Genesis about my cartoons [Ed. note: for example, Creation Wise and After Eden]. Even when an objection has been raised concerning my cartoons, I do appreciate hearing from my readers.

I recently finished reading the booklet “Inherit the Wind” by Dr. Menton, I wanted to say how much I enjoyed it. It's a shame that the truth about the Scopes trial has been hidden for so long.

From time to time, I receive negative responses to my cartoons. Most come from those who disagree with the message in my cartoons-that man’s ideas apart from Scripture are highly suspect and only the Bible is 100% trustworthy and true. However, some object to the use of cartoons in the context of ministry simply because they are cartoons. Contrary to this way of thinking, I believe cartoons are legitimate tools for effective communication even in a Christian ministry.

It has been my experience that objections to the use of cartoons come because their purpose is thought to be only for foolishness and mocking or derogatory humor. Therefore, the conclusion is sometimes made that any cartoon connected with the Bible or serious issues of life (such as abortion, war, terrorism, family breakup, etc.) must be “inappropriate” at best and very likely “offensive to God.”

Are all cartoons supposed to be funny?

I often challenge those who object to cartoons in ministry with this question: if a cartoon does not make the reader laugh, is it a failure? The answer is, it depends on the purpose of the cartoon! You see, cartoons have a much broader range of purpose than just humor.

Many of my favorite cartoons have nothing to do with humor. Think back to the tragic events we've seen hit our world over the past few years. Tragedies like 9-11, the tsunamis in Asia, starvation and disease in Third World countries and the hurricanes that have hit the US. These events have killed thousands, even millions of people and left the lives of many survivors shattered and ruined. Yet, as each event unfolded, cartoonists around the world, including myself, produced cartoons to express the pain, sorrow, anger and compassion in very appropriate, respectful and creative ways. These cartoon depictions were not funny-nor were they meant to be. They were very serious and their purpose was to comfort, encourage and provoke meaningful thought. Here are a couple of my cartoons drawn after specific tragic events. The first was drawn after the Columbine school shootings in Colorado:

The second was drawn to deal with an important question people were asking after 9-11:

As you can see, I'm not looking for a laugh, but rather serious contemplation and even a tear.

Is humor wrong in a Christian ministry?

So, not all cartoons are for the purposes of humor. What about the ones that are meant to be funny? Sometimes there are very strong objections to any hint of humor when dealing with biblical topics. In a way I can understand why these reactions happen, since the world often uses humor to mock Christianity and the Bible. But, as we examine the issue of humor in ministry, let's first ask the question, what is the origin of humor? Of course, the biblical answer is that humor was created by and given to us by our Creator.

Humor, like most things in this fallen and sin-cursed world, has been corrupted by sin. Now there are good and worthwhile forms of it and there are bad and harmful forms of it. It is between these two sides (with some gray area in the middle) that we must discern.

Here are a few samples of my After Eden cartoon that display biblical humor. The humor is not aimed at Scripture, but instead is used to reinforce it.

The above cartoon depicts a situation that points to the contrast between the perfect life in Eden and the fallen world we live in now. What a shock the fallen world must have been to Adam and Eve!

Here is a cartoon that depicts the victory we celebrate in the Resurrection of Christ versus lesser, alternative Easter activities with candy and baskets. Did it make you smile? I hope so. The Resurrection is something to smile about!

This cartoon was inspired by an actual accident that involved some AiG staff members. The point here is to highlight the futility of not believing in God. To me this is funny and sad at the same time.

Not all “biblical cartoons” are biblical

As I write this defense of cartoons in Christian ministry, I must also point out that not all cartoons produced by Christians are favorable to Scripture. Images of Noah's Ark are a good example of this. How many times have you seen an ark like the one below in Christian children's books or even in church nurseries? 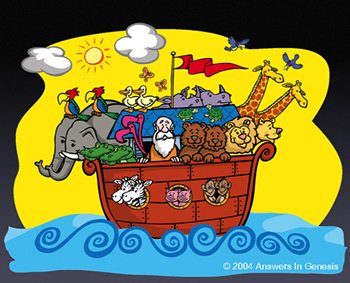 Is the problem that this image is a cartoon? Let's take away the cartoon element and look at the same ark, Noah and animals as a photorealistic image. 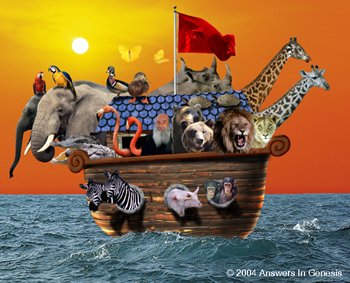 Is this any better than the cartoon version? No. The distortion is the same regardless of style and it's the distortion that is the main problem. In fact, in some ways the photorealistic version is even worse, as more people would tend to believe it is an accurate representation of Genesis 6. The point of this illustration is that we must look at the content of the image first to determine what the artist is trying to communicate rather than coming to a conclusion based on style alone.

Why are the cute little arks unbiblical? In Genesis 6 we learn that the Ark was a HUGE vessel with the capacity to hold Noah and his family, all the animals that God sent to survive in the Ark and the supplies to sustain all of them for over a year. Most people today don't believe Noah's Ark was a real vessel or that the worldwide flood actually happened. Why? Because “Noah could never have fit all those animals onto the ark.” Where do you suppose that idea came from? Do you think those cute little arks we see practically everywhere are helping people to believe Noah's Ark was real?

By the way, it is possible to draw a biblical cartoon Ark. Here is an example that better reflects the Ark dimensions given in Genesis 6.

Biblical cartoons to honor Christ and His Word

My position here at AiG is staff cartoonist/illustrator. Ken Ham and the other AiG speakers have been using my cartoons now for over 11 years in their lectures. AiG has also used them in books, booklets, newsletters, T-shirts, brochures and on the AiG website. Many of the same cartoons that Ken Ham uses in his lectures are offered on the AiG website for people to use in their own creation talks-to help them make biblical points that are sometimes easier to understand with a visual aid.

My heart as a Christian cartoonist is to effectively communicate a biblical message to those who see these illustrations and cartoons. Cartoons are a very effective communication tool (especially to people where English is a second language) and we find in the AiG ministry that cartoons reach people many times faster than words alone. Cartoons have a way of capturing attention, opening minds and communicating in a way that “serious” images cannot always achieve. Here's a cartoon made to point out the contradiction of believing God used millions of years of death and suffering to create the world and then called it “very good” in Genesis 1:31.

Can you imagine how an audience would react to a photorealistic version of this image? YUCK!

As you can imagine, the issue of the validity of cartoons being used in Christian ministry is important to me because it's one of the ways that I serve God here at Answers in Genesis. It is my desire to use cartoons in a positive way to preach a message that points people to the truth of Scripture, and to glorify our Creator and Redeemer, Jesus Christ.

I'd like to make some constructive suggestions for when you view cartoons in the future, to help you understand the cartoons and their meaning. I suggest these out of sincerity and hope they will help guide you to discern the value of a cartoon.

Thanks again for your comments. I hope this is helpful to you in regard to cartoons in ministry and my role in the AiG ministry.