Does Your Dog Understand You Because You Share an Ancestral Bond?

Brain imaging suggests dogs and humans are wired to respond to sounds the same way.

Why is dog “man’s best friend”?1 How does my dog sense when I’m happy or upset? Hungarian researchers suggest we bond so well with dogs because our brains are wired for sound the same way. They attribute the similar response patterns to an ancient shared evolutionary history.

The research team led by Attila Andics, which just published their study in Current Biology, compared how the brains of humans and pet dogs react to sounds. “We think dogs and humans have a very similar mechanism to process emotional information,” Andics says. Surprising similarities, the authors write, suggest that brain regions responsive to voice—previously unknown to exist in dogs— “may have a more ancient evolutionary origin than previously known.”2

Groovin’ in the Tube

Eleven pet dogs were trained to relax and lie still in an MRI scanner. The 22 human volunteers required less training. Then the team watched how their brains responded while 200 sounds were played through their headsets. Noises included environmental sounds like cars and whistles, doggie sounds like whimpering and angry barking, and people sounds like crying and laughing. No words were used. 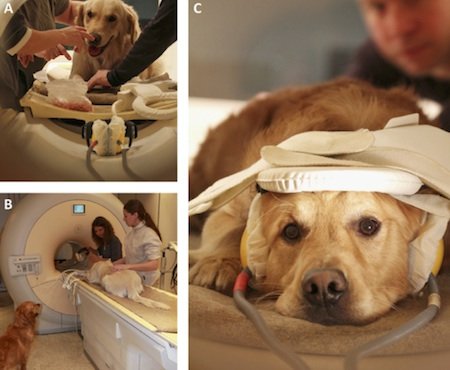 These pets are learning how much fun an MRI can be. The dog on the floor is watching while the dog getting ready for his scan gets treats from his owner along with a nifty set of headphones. The dog on the right has learned to relax with his headset and an MRI coil strapped to the top of his head. Eleven such cooperative pets had MRI scans while they listened to sounds common in human society. Images by Attila Andics, via Current Biology.3

The same general region of the brain, near the primary auditory cortex, lit up in response to emotion-laden human sounds and canine sounds. Dogs did show a greater response to dog-generated vocalizations than to human ones. Environmental noise triggered less of a response, but the distinction between organic and inorganic noise was far greater in humans. Environmental clutter only triggered a response in about 3% of the human auditory cortex but got the attention of about half of the corresponding canine region. (Those of us who own pets are probably glad that dogs pay attention to cars instead of taking traffic for granted.)

“We do know there are voice areas in humans, areas that respond more strongly to human sounds that any other types of sounds,” Andics explains. “The location [of this voice-sensitive area] in the dog brain is very similar to where we found it in the human brain. The fact that we found these areas exist at all in the dog brain is a surprise—it is the first time we have seen this in a non-primate.” Andics says, “This similarity helps explain what makes vocal communication between dogs and humans so successful. It’s why dogs can tune into their owners’ feelings so well.”

No amount of controlled scientific study can show that humans share an ancestor with primates or dogs.

Domesticated dogs and humans daily encounter the same sorts of sounds. This is the first time the way their brains process such sounds has been compared. Macaques have a voice-sensitive region, but no other animals have been so tested. Commenting on the study, University College London Professor of Cognitive Neuroscience Sophie Scott, says, “Finding something like this in a primate brain isn't too surprising—but it is quite something to demonstrate it in dogs. Dogs are a very interesting animal to look at—we have selected for a lot of traits in dogs that have made them very amenable to humans. Some studies have shown they understand a lot of words.” She cautions, however, “It would be interesting to see the animal’s response to words rather than just sounds. When we cry and laugh, they are much more like animal calls and this might be causing this response.” She suggests the next step should be to see how the dogs react to their owners speaking. Such future experiments are planned.

Andics and colleagues suggest the preferential response to vocalizing sounds “in these auditory regions is an evolutionarily ancient function across mammalian orders, although convergent evolution is an alternative,” adding, “At the very least, our results show that, similarly to primates, conspecific vocalizations have a special status in the dog brain.”4 The second part of this statement—that pet dogs have a voice-responsive region of the brain—is a scientific observation that needs more controlled studies to rule out alternative explanations, as Scott points out. The first part of this statement, however, is an effort to explain the findings through a purely evolutionary worldview. No amount of controlled scientific study can show that humans share an ancestor with primates or dogs.

Dogs respond to yawning and even to the sound of their owners yawning by yawning themselves. This study may have revealed a neuroanatomical basis for that response. However, great caution should be exercised in drawing conclusions. Non-auditory cues have not been investigated. Moreover, there is no way to know what an animal is “thinking” about the sounds it hears. Perhaps as humans have domesticated dogs we have selected those that already have a heightened sensitivity to the sounds we make. Or perhaps these pet dogs through positive reinforcement have developed a conditioned response to human sounds. Without comparative data on wild dogs, this cannot be known. And since extensive training with positive reinforcement and lots of doggie snuggles was needed to teach these dogs to lie quietly in an MRI scanner—an experience that unnerves lots of humans who discover their latent claustrophobia—it is unlikely any wild dog control subjects will be forthcoming.

Evolutionary researchers are surprised to find neurological similarities between humans and dogs but not between humans and apes. Why? Because they already assume that apes and humans share a “recent” common ancestor but presume a common mammalian heritage goes back much further—100 million years at least. The only possible alternatives they entertain, because of their evolutionary bias, is that either the mammalian brain’s responsiveness to vocalization evolved before that time or that the very same brain organization evolved independently in dogs and humans after their presumed divergence 100 million years ago.

Nothing in biology, however, has shown that one kind of creature can acquire the genetic information to change into a different kind of creature. The researchers ignore the historical record of the Bible and light it sheds on the past. Humans, apes, and canines were all created by God on the 6th day of Creation Week, about 6,000 years ago. Humans, apes, and canines have, since then, varied and reproduced only within their own kinds. Humans are therefore no more related to apes than to dogs.

God our Common Designer used many common designs in His creation. Therefore it should be no surprise to find that the general neurological architecture of the brains has similarities. While we share common designs with some animals, humans have unique attributes that enable us to communicate with God and with each other. We enjoy learning about how animal and human bodies and brains function. But we should not leap to assume that similarities are evidence for an unverifiable evolutionary past and thus disregard the Word of the God who created us all.