The Consequences of Denying a Supernatural Creation of Adam

Today, there is a significant paradigm shift taking place within the evangelical academy in its approach to understanding the identity of Adam. Due to a mixture of biblical and scientific reasons, an increasing number of evangelical scholars are beginning to deny the supernatural creation of Adam. Viewing Adam as anything other than the first human, who was supernaturally created, is now becoming a standard interpretation for many within the evangelical community.

This shift has come about largely by evangelicals who are committed to embracing evolution as the way God created the world and formed the first human being.1 A number of proposals for interpreting Adam have been suggested by theologians who embrace evolution: that he is stereotypical,2 a neo-lithic farmer,3 the head of a tribe,4 an archetype of humanity,5 or that he did not even exist.6 In order to understand Genesis this way they have to sacrifice the clear teaching of the Bible to fit with a particular evolutionary view of Earth’s history.

Unfortunately, these scholars seem unaware of the devastating consequences for synthesizing evolution with Bible. In his book Darwin’s Dangerous Idea, the atheist philosopher Daniel Dennett likened Darwin’s idea of natural selection acting on chance variations to that of a “universal acid” that is so corrosive that nothing can contain it. According to Dennett, Darwinism eats through virtually every traditional concept of mankind’s most cherished beliefs about God, value, meaning, purpose, culture, and morality—everything.7 The evidence of the “universal acid” that is Darwinism and how it erodes Christian doctrine is seen in the beliefs of “professing Christian” and committed Darwinist Karl Giberson, who stated the following in his book How to Be a Christian and Believe in Evolution:

Acid is an appropriate metaphor for the erosion of my fundamentalism, as I slowly lost my confidence in the Genesis story of creation and the scientific creationism that placed this ancient story within the framework of modern science. Dennett’s universal acid dissolved Adam and Eve; it ate through the Garden of Eden; it destroyed the historicity of the events of creation week. It etched holes in those parts of Christianity connected to these stories—the fall, “Christ as second Adam,” the origins of sin, and nearly everything else that I counted sacred.8

The issue is not whether a person can be a Christian and believe in evolution, but what that person has to abandon theologically and biblically in order to hold to his belief in evolution.

The issue is not whether a person can be a Christian and believe in evolution, but what that person has to abandon theologically and biblically in order to hold to his belief in evolution. While it is possible to believe in God and evolution, this does not mean that you can believe in both with a consistent and coherent understanding of Scripture. Unlike Giberson, many theistic evolutionists inconsistently reject the supernatural creation of Adam yet nevertheless accept the reality of the virgin birth and the miracles and Resurrection of Christ, which are equally at odds with the truth claims of the secular scientific majority. Theistic evolutionists have to tie themselves up in knots in order to ignore the obvious implications of what they believe. The term “blessed inconsistency” should be applied here as many Christians who believe in evolution do not take it to its logical conclusions.

Christians who accept evolution are unwittingly helping to erode belief in the supernatural creation of Adam and other vital doctrines of the Christian faith. This is evidenced by the secular world, which often does see the importance of Adam to biblical Christianity:

If Christians accept that humanity was the product of evolution—even assuming the process could be seen as an expression of the Creator’s will—then the whole idea of Original Sin would have to be reinterpreted. Far from falling from an original state of grace in the Garden of Eden, we have risen gradually from our animal origins. And if there was no sin from which we needed salvation, what was the purpose of Christ’s agony on the cross? Christ became merely the perfect man who showed us what we could all hope to become when evolution finished its upward course.9

Bowler, unlike many Christians, recognizes that evolution not only destroys the creation of Adam but also the concept of original sin and the atonement of Christ. This is a practical consequence of synthesizing evolution with the Bible.

Nevertheless, Genesis 2 makes it abundantly clear that Adam was the first man who was supernaturally created. Genesis 2:5 tells us that there was no man around yet to cultivate God’s creation, which is the reason that Genesis 2:7 informs us that “God formed man from the dust of the ground, and breathed into his nostrils.” The process of Adam’s creation is the most crucial part of this debate. For example, if Adam was not the first man and there were other creatures prior to Adam, then in what sense was he the first man (1 Corinthians 15:45)?10

Furthermore, Genesis 2:18 says that the man was alone. He was the only human, which shows that it is not yet the end of the sixth day, for part of the reason that creation is declared to be “very good” (Genesis 1:31) is that by the end of that day God had made a helper for the man (Genesis 2:18–22). The problem for Denis Lamoureux, John Walton, and C. John Collins is how Adam can be described as “alone” if he is an archetype of humanity or is the head of a tribe?

The debate over whether Adam was supernaturally created is ultimately a debate over whether we trust what the Scriptures clearly teach. If we cannot be certain of the beginning, then why would we be certain about what the Scriptures teach elsewhere? The uncertainty of truth is rampant in our culture, which is why many believe the issue over the process of Adam’s creation is unimportant.

But this is not an unimportant matter: it is a biblical fact with huge theological implications. For example, the significance of the supernatural creation of Adam for the church today has implications on the doctrines of sin, salvation and Christology.

Sin: Evolution demands that there was never one uniquely created man who started out good and rebelled against God, or from whom all human beings descended, and therefore none are in need of a savior. Instead, the human race began as a group of hominids who had no knowledge of God or righteousness, struggling for existence in a world already filled with death. It therefore follows that sin and death cannot have originated with Adam. Yet, the Bible clearly states that physical (and spiritual) death originated with Adam’s disobedience against God (Genesis 3:8, 19; Romans 5:12; 1 Corinthians 15:21–22).

Salvation: Christians need to consider what Jesus’ death achieved if evolution is true and physical death and suffering were already present in an evolving world before Adam disobeyed God. The consequences of these ideas are apparent. Once we reject the biblical revelation that God created his world “very good” (Genesis 1:31) and that physical death never came about because of Adam’s disobedience then there really is no need for the Cross, atonement, or a new heaven and earth, as biblically all of these are needed because death and suffering entered into the creation through Adam’s disobedience toward God in Genesis 3 (Romans 5:12–21, 8:19–22; 1 Corinthians 15:21–22; Revelation 21:4, 22:3). 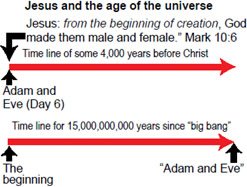 Understanding Adam as being supernaturally created by God is important for a coherent, logical, and internally consistent theological understanding of the biblical message of creation, fall, and redemption (Luke 3:38; Acts 17:22–34; Romans 5:12–21; 1 Corinthians 15:21–22, 45). It is also necessary to the truthfulness and authority of the whole Bible.