“I Have Been Told Its All About Faith”

Hello, My name is as above Adam [last name deleted] I am 16 years old from Liverpool in Merry old England. Now although one must respect others views, beliefs, and opinions, I by my own nature must disagree whole heartedly with the creation story etc.

In the age of science and technology that we are currently in, science is constantly giving us a look into the galaxy etc.

As Christians we fully believe in science. In fact, most fields of science were developed by Christians. Please see Creationist Scientists of the Past.

Offering explanations for many things including our creation, of which there is some sort of evidence. The bibles interpretation of creation has absolutely no proof whatsoever which is unacceptable,

See most people don't realize that we have the same science and the same facts and the same evidences but it is the interpretations of those evidences that are different. Please take some time to read the following two articles—they are very important:

yes I have been told its all about faith

First, you misunderstand biblical faith, which is NOT believing in the absence of evidence, but belief and trust in Christ grounded in the reality of His fulfilled promises. But in another sense, all belief systems start with axioms, or propositions held to be true without proof, and from which other propositions are deduced. These axioms form a framework by which facts are interpreted. As we often emphasise, creationists and evolutionists have the same facts; the difference is how they are interpreted, and the difference is due to the different axioms.

In fact, evolutionary views require tremendous faith, in the way you mean. They first believe their theory and then apply those beliefs to their studies. Many evolutionists are open about this:

but the bibles story could of been very different Eg. God sent down his children Adam the Bunny and Eve the dinosaur and they ate from the forbidden tree etc.

If the Bible story had been different, then God would have said so.

See, you are making the assumption that God isn’t powerful enough even to say what He means and mean what He says. This is a fallacy. If God would have said He used evolution or billions of years, we would defend that, but He didn’t. He said He created Adam and Eve and then said Jesus is a direct descendant of Adam (Luke 3).

As quite absurd as that example is if something equally bizarre as that had been wrote in the bible would the same faith in god be there?

God said that without faith it is impossible to please Him. As I mentioned before, evolutionists have great faith, but in the wrong foundation. [Here is] a letter that I sent to an evolutionist that compares the Biblical foundation to the evolutionary foundation.

From it, you’ll be able to see, as he did, that what he believed actually required much more faith than believing in the Bible.

I seriously doubt it. Therefore faith has nothing to do with it as Adam and Eve needed to be believable in order for people to believe in it etc.

True . . . and I believe in Adam and Eve. I find it much easier to believe that all the humans in the world came from two humans than from a primordial soup as evolution teaches.

Also the mind boggles, when you ask people how did god create itself? and Why at that time? and they answer;

"God willed itself to be created, and God has always been there"

Actually this is a straw man, and I can think of no Christian apologist who would say the first part. God is eternal and not created according to the Bible. In fact, He created time. Here is a good article to explain it better, and to explain why a self-caused being of your imagination is a logical impossibility:

That is a nonsense in itself, There had to be a beginning in order for something to exist and something cannot will itself to exist as it would need to exist to will. All of that causes as I said the mind to boggle.

Well, yes, but you can’t blame us for a misconception of your own making.

Now I may be young and somewhat naive, but im far from stupid and not easily near brainwashed by a religion with poor evidence to support it or lack there of evidence.

I don’t think you are stupid—I encourage people to think through things. But I insist they be thorough. However, by making an assertion like this, it is implying that you think we are stupid. As I mentioned before, we all have the same evidence. It is through which glasses you look at the evidence as to how you perceive it. Here is an illustration that should help: 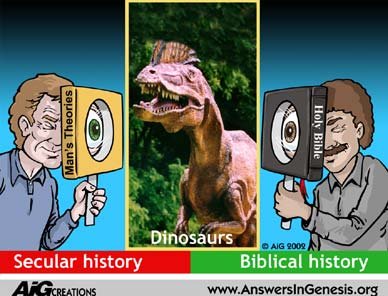 My opinion is religion is a form of social control from a long gone age when people believed in all kinds of superstitions.

Did you know that there are more religions today that there ever has been. There are religions that do not believe in God such as Buddhism, Confucianism, and Secular Humanism. Secular Humanism is the one that engulfs evolution and actually controls your country right now. See how Michael Ruse now admits that Evolution is a religion.

Also, one study—by skeptics—showed that a major Antidote to superstition is biblical Christianity.

Now that people have been released from the shackles of religious control they now see that as i said its a form of control.

Actually it just shifted from one religious control to another. Christianity stated that there is such a thing as right and wrong and evolutionist claim the opposite. Nazis were pro-evolution as was communist Russia under Stalin. Notice what they did in the past century—the most controlling and genocidal governments which have ever existed (see “The Darwinian Foundation of Communism”). Evolutionists fully admit that there is no such thing as absolute right or wrong under their own philosophical system and they should do what ever they want to:

Hence the near collapse of christianity in Britain not to mention many other religions.

True, but one religion is dominating the UK right now—Secular Humanism. What are its fruits? Can you leave your doors unlocked? Please see:

Now I could list endless questions about god that are unbelievable but im aware nobody can really answer them so i wont bother.

Actually most are probably already answered. Please see our topic page for God.

This has been known to be faulty ever since Gödel’s famous ‘incompleteness’ proof. He showed that any axiomatic system at least as complex as arithmetic would always have true statements that could not be proven under that system.

and its all lies to control the masses.

Those are two bald assertions. First, you assume that there is falsehood, although you have not demonstrated even one. Then you resort to cheap psychologization of the motives of the authors. Certainly the New Testament writers were in no position to control the masses, but were almost all martyred!

I’ve studied the Bible for nearly 20 years, I’ve studied mechanical engineering, electrical engineering, materials science, became one of the youngest faculty instructors at a secular university (SIUC) by the time I was 24. Yet, I have never found a single valid contradiction in the Bible nor the Bible with science. Every alleged problem has been resolved to my knowledge. Please see the articles under Bible ‘contradictions’ and ‘errors’.

I have made my decision after years of study. I suggest you also get into the details. It has been fascinating to learn.

Oh one more thing the massive following of god in america cannot really be counted as the country has been subjected to brainwashing for many a decade and will believe anything as Americans generally arent very bright.

This is pretty bold statement. What proof do you have that Americans aren’t very bright? I want to check your references. In any case, the only ‘brainwashing’ going on is in the government schools—into evolutionary humanism! The evolutionary establishment doesn’t want students to learn about the problems, and a leading supporter of such evolutionary indoctrination inadvertently reveals why:

‘In my opinion, using creation and evolution as topics for critical-thinking exercises in primary and secondary schools is virtually guaranteed to confuse students about evolution and may lead them to reject one of the major themes in science.’

I hope this is acknowledged as a serious email and is responded to. Again sorry if any offense was caused.

Previous Article Out of the Shell Next Article A “More Glorious” Means for Creation?