Searching for the “Magic Bullet”

Why do creation-defenders often seem to be too quick to jump onto the latest “evidences?”

All evidence is actually interpreted, and all scientists actually have the same observations—the same data—available to them in principle.

In 1986 a number of leading creationist researchers decided that the evidence of supposedly human and dinosaur footprints, found together at the Paluxy River in Texas, had serious problems. They decided that, pending further research to establish the correct interpretation of the prints, they could no longer be safely used as evidence supporting the fact (based on the biblical account of creation) that man and dinosaur lived at the same time.

Regardless of what the correct interpretation really is, I want to discuss a related phenomenon that is rife throughout the church. I believe it is one of the reasons so many Christians believe in millions of years, and do not accept the days of creation as ordinary-length days. It is also why so many creationists are not able to successfully argue with evolutionists in a convincing way.

In 1993 Answers in Genesis published an article in our refereed journal (now called TJ) about the popular ‘moon dust’ argument supporting a young universe.1 The idea was that the thickness of dust on the moon when the astronauts landed was only enough to account for a few thousand years worth of accumulation, given the amount that was presently pouring into the earth/moon system. But the authors of the article concluded that this argument should no longer be used, because new measurements showed that the influx of meteoric dust was much less than evolutionists had previously thought. 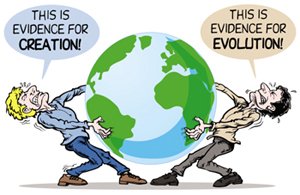 Later, AiG published articles concerning the supposed plesiosaur carcass netted by a Japanese fishing trawler in 1977.2 These reported on research which substantiated that this carcass could not be of a plesiosaur, and was consistent with a basking shark identification. (They included photos of an actual decomposing basking shark.) This was despite our having previously given favourable publicity to the ‘plesiosaur’ interpretation in our literature.

After this ‘plesiosaur’ article, a person approached me at a creation seminar, and, obviously upset, stated, ‘First you take away the Paluxy prints, then the moondust, and now you’ve destroyed the 1977 plesiosaur argument. If you keep going, we won’t have any great evidence left at all to counteract the evolutionists.’

In November 2001, Answers in Genesis published an article on its website entitled, Arguments we think creationists should not use, which was added to the Q&A section. This covered a substantial number of widely-used arguments opposing evolution. It was meant to inform Christians why we felt these arguments were either factually incorrect, or were very dubious and unsafe, even counterproductive, to use. Early the following year, a modified form appeared in Creation magazine.3

Again, some people became upset, expressing their dismay through phone calls, emails and the like. Once more, I had people complain to me at conferences. One man said: ‘Evolutionists have so much evidence; if you people at AiG keep destroying some of the greatest evidence we’ve had, there’ll be none left for creationists. You’re helping the evolutionists win!’

Quite apart from the strange implication that we should not inform people of the truth about things that are believed to be in error, I’ve noticed that many people do not really understand the nature of ‘evidence.’ So they think that to oppose evolution or disprove an old earth, one has to come up with totally different or unique ‘evidence.’ I think this is a major reason why a number of Christians are drawn to what I call ‘flaky evidence’ in the hope that this will counteract evolution. For instance, such things as:

Most well-meaning creationists would agree in principle that things that are not carefully documented and researched should not be used. But in practice, many of them are very quick to accept the sorts of evidences mentioned here, without asking too many questions. Why this seeming urge to find a startling, exciting ‘magic bullet’?

I think it is because probably the majority of Christians believe that the ‘evidence’ overwhelmingly supports an old (millions of years) earth.4 For many, it causes them to reject what the Bible makes so plain about history, to the great detriment of the Gospel founded on that history.

But even those who keenly support Genesis still tend to see it as if there is a ‘mountain’ of ‘their’ facts/evidences lined up ‘against our side.’ This is, I believe, why they are less cautious than they might otherwise be, because they are so keen to have ‘our’ facts/evidences to counter ‘theirs.’

All evidence is actually interpreted, and all scientists actually have the same observations.

That is, both of the above groups suffer from the same basic problem. They really don’t understand that it is not a matter of ‘their evidence vs ours.’ All evidence is actually interpreted, and all scientists actually have the same observations—the same data—available to them in principle.

I then stop the interviewer and state, ‘I want to get something straight here, I actually have the same evidence the evolutionist has—the battle is not about the evidence or facts, as they are all the same. We live on the same earth, in the same universe, with the same plants and animals, the same fossils. The facts are all the same.’

Then the evolutionist says, ‘But you’re on about the Bible—this is religion. As an evolutionist I’m involved in real science.’ 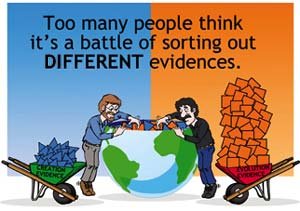 I then respond, ‘Actually, as a creationist, I have no problem with your science; it’s the same science I understand and trust. The argument is not about science or about facts—ultimately, the argument is about how you interpret the facts—and this depends upon your belief about history. The real difference is that we have different “histories” (accounts about what happened in the past), which we use to interpret the science and facts of the present.’

‘Now this can be tested in the present. The scientific observations support the creationist interpretation that the changes we see are not creating new information. The changes are all within the originally created pool of information of that kind; sorting, shuffling or degrading it. The creationist account of history, based on the Bible, provides the correct basis to interpret the evidence of the present—and real science confirms the interpretation.’

My point is that if we Christians really understood that all evidence is actually interpreted on the basis of certain presuppositions, then we wouldn’t be in the least bit intimidated by the evolutionists’ supposed ‘evidence.’ We should instead be looking at the evolutionist’s (or old-earther’s) interpretation of the evidence, and how the same evidence could be interpreted within a biblical framework and be confirmed by testable and repeatable science.

I believe if more creationists did this, they would be less likely to jump at ‘flaky’ evidence that seems startling, but in reality may be being interpreted incorrectly by the creationists themselves in their rush to find the magic-bullet, knock-down, drag-em-out convincing ‘evidence’ against evolution that they think they desperately need. 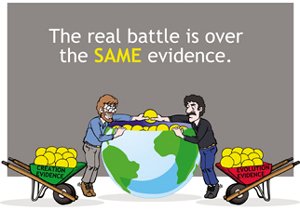 The same is true of dating methods. All dating methods suffer, in principle, from the same limitations—whether they are those which are used to support a young world or an old world. Even the famous moondust argument, back when it still seemed that this was an excellent one to use (given the information available), needed to involve assumptions—uniformitarian assumptions, just like radiometric dating does. Even before the error in the measurement of moondust influx was pointed out, evolutionists could rightly counter—how do you know that the dust has always been coming in at the same rate? Of course, such creationist arguments have always been justified in that they are merely turning their own uniformitarian assumptions against them. Creationists can rightly challenge radiometric dating on this same sort of basis, too. Once one understands the assumptions/presuppositions behind dating methods, one realizes that the ‘date’ obtained is actually an interpretation—not a fact!

The bottom line is that it’s not a matter of who has the better (or the most) ‘facts on their side.’ We need to understand that there are no such things as brute facts—all facts are interpreted. Thus, the next time evolutionists use what seem to be convincing facts for evolution, try to determine the presuppositions they have used to interpret these facts. Then, beginning with the big picture of history from the Bible, look at the same facts through these biblical glasses and interpret them differently. Then, using the real science of the present that an evolutionist also uses, see if that science, when properly understood, confirms (by being consistent with) the interpretation based on the Bible. You will find over and over again that the Bible is confirmed5 by real science.

But remember that, like Job (42:2–6), we need to understand that compared to God we know next to nothing. So we won’t have all the answers. However, so many answers have come to light now, that a Christian can give a credible defence of the book of Genesis and show it is the correct foundation for thinking about, and interpreting, every aspect of reality.

So let’s not jump in a blind-faith way at the startling evidences we think we need to ‘prove’ creation—trying to counter ‘their facts’ with ‘our facts.’ (Jesus Himself rose from the dead in the most startling possible demonstration of the truth of God’s Word. But still many wouldn’t believe—cf. Luke 16:27–31.) Instead, let’s not be intimidated by apparent ‘evidences’ for evolution, but understand the right way to think about evidence. We can then deal with the same evidence the evolutionists use,6 to show they have the wrong framework of interpretation—and that the facts of the real world really do conform to, and confirm, the Bible.