Bill Nye was interviewed by CNN after possible 2016 presidential candidate Senator Marco Rubio stated that “the age of the universe has zero to do with how our economy is going to grow” and that the dispute over the question “has nothing to do with the gross domestic product or economic growth of the United States.” (Be sure to read the complete quotation and last week’s analysis of Rubio’s remarks) Nye, a popular children’s television personality, is an outspoken evolutionist and secular humanist who has made dire predictions that American progress will grind to a halt if American children fail to accept evolutionary ideas.

Nye, claiming earth is 4.54 billion years old, mixed up historical science with experimental “here and now” science in his attempt to build a case for the economic relevance of evolutionary thinking. Both Nye and the CNN interviewer used this convenient conflation of concepts in an attempt to discredit Rubio’s statement. 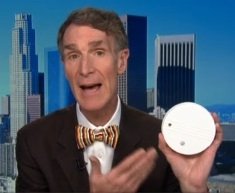 Bill Nye tries to use present-day technology that depends on present-day experimental science to support his contention that America’s economic future depends on Americans believing the earth is 4.54 billion years old. Smoke detectors typically contain a radioactive isotope (americium-241). The alpha particles it emits ionize the air in the detector. The ionized air completes an electrical circuit. Smoke disrupts the circuit because ions stick to smoke particles. Production of this technology has nothing to do with a belief in billions of years or knowledge of earth’s age but only with the observable behavior of radioisotopes today. Image from video interview of Bill Nye, via CNN.

Throughout the interview, satellite and telescope images of the earth and space as well as videos showcasing scenic vistas and interesting animals played in the background. Nye’s credentials—such as they are—lingered on screen. (Nye’s only earned degree is a Bachelor of Science in Mechanical Engineering. His other credentials are merely honorary degrees.) The images and captions, falsely implying Nye is an expert in all things scientific, reinforced Nye’s erroneous contention that life as we know it would not be possible if Americans had not historically accepted evolutionary dogma as factual. Additional captions quote Nye’s claims that “We need scientifically literate voters and taxpayers for the future.”

Nye’s scientific “expertise” consists only in accepting by faith the worldview-based opinions of the majority of secular scientists. He ignores the positions of the hundreds of masters- and doctoral-level scientists (including those in the fields of physics, geology, astronomy, biology, and medical science, many with degrees from secular universities) who do hold that a young earth position is scientifically reasonable. Sadly, those who, like Nye, cannot grasp the distinction between what can be examined and tested in the present and what they believe ought to be true about the untestable unobservable past are creating a gap in the scientific literacy of those who follow their lead. In fact, Nye and other evolutionists are deceiving the public so that many are incapable of thinking critically about this issue.

Nye tried to connect “exploding stars and especially the big bang” to our economy by saying we “rely on those elements [supposedly created then] for our everyday life in order to have the quality of life that we have.” Knowledge of the behavior of those elements is essential for technological and medical advancement, which affect the economy. But the origin of those elements and their hypothetical behavior billions of years ago are categorically different issues, completely unrelated to economic growth. Nye’s “proof” for the age of the earth is the existence of radioactive decay in some of those elements. As he struggled to recall whether strontium decays into rubidium or if it were the other way around, Nye assured listeners of the accuracy of the 4.54 billion years by saying, “You can look at this ratio, the half life of that reaction, is 48.8 billion years. This is measured in laboratories. Sometimes laboratories will observe something for fifteen years to get it just exactly right, so then you work backwards to the age of the rocks.” What Nye fails to mention is that the experimentally determined values—even those that take fifteen years to validate—can only be “worked backwards” for billions of years by making many unverifiable assumptions about the untestable past. (For an explanation of these unverifiable uniformitarian assumptions and interpretations, see “Radiometric Dating,” “Radiometric Dating: Problems with the Assumptions,” “Radiometric Dating: Making Sense of the Patterns,” and “The Fallacies of Radioactive Dating of Rocks.”)

Nye attacked Senator Rubio’s comments, saying, “He went on to claim that there is no connection between our scientific understanding of the age of the earth and our economy, and I very, very strongly disagree with that.” Then the interviewer, explicitly misrepresenting Rubio’s remarks, planted a false idea in viewers’ minds when she asked Nye, “You obviously don't agree that science has nothing to do with the economy and growth?” Yet notice that Senator Rubio never said that science has nothing to do with economic growth. Recall, Rubio said the “dispute amongst theologians” about the age of the earth

. . . has nothing to do with the gross domestic product or economic growth of the United States. I think the age of the universe has zero to do with how our economy is going to grow.

While Rubio did not take a position on the question, he at least acknowledged, in essence, that worldview-based interpretations in historical science determine the answers people accept. He therefore took a stand for the freedom of Americans to believe and teach those worldviews to their children. As we noted last week, President Obama has publicly answered the same question the same way.

Nye explained that “deep understanding” of “the nuclear reactions that take place in elements” has allowed the invention of smoke detectors and smart phones and television. He then insinuated this technology is built on evolutionary beliefs about the time of our origins, saying, “So this claim that it has nothing to do with the economy is, as far as I am concerned, is just wrong. Now I’m not goin’ after anybody’s religion, that’s not it, it’s just that the earth is not 6,000 or 10,000 years old, that’s not, and furthermore we rely on these discoveries for our everyday life, especially here in the developed world.”

Some technologies rely on the behavior of radioactive elements over brief spans of time. Conventional radiometric dating results from worldview-based interpretations and unverifiable assumptions about those radioactive elements over billions of years. But such technological applications do not depend on acceptance of those unverifiable assumptions but only on observable experimental science. Scientists producing these inventions do so without any reliance on whether radioactive decay has been going on for 6,000 years or 4.54 billion years. Nye is using the wrong kind of examples to support his case.

Finally, Nye provides an obvious example of his confusion. The interviewer asks, “Do you still believe that teaching children that the earth is anything but 4.5 billion years old is the same as teaching them that the earth is flat?” Nye answers, “It’s a pretty good analogy—in that you can show—you can very easily demonstrate—that the earth is not flat—with a little more diligence and a little more understanding you can show that the earth cannot possibly be 10,000 years old.” Again, backed up by NASA satellite images of earth, Nye indicates knowledge of earth’s shape—which can be observed and verified—are comparable to billion-year claims. 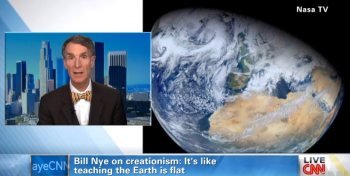 Bill Nye illogically compares experimentally testable observable scientific facts about the shape of the earth to untestable unobservable interpretations about the age of the earth. For a brief video explaining the difference between experimental and historical (origins) science, see “Two Kinds of Science?” Image from video interview of Bill Nye, via CNN.

Those billion-year claims depend on unverifiable assumptions, not on verifiable observational science. The assumptions include—without support—the belief that all processes (geological, biological, astronomical, etc.) have proceeded at the same pace and in the same way since the universe supposedly sprang into being from nothing. Yet nothing in science can support such claims. Experimental scientific support demands controlled repeatable observations, but the earth is already here. We cannot go back in time and observe its origins, nor can we experimentally recreate the earth, the sun or any star in the laboratory.

We must rely on a historical record to understand unobservable past events. Any history “in the rocks” must be calibrated using a historical record from an eye-witness of that history. And that record of history is in the Bible. On the other had, the shape of the earth is observable. Even ancient people observing the masts of ships disappearing over the horizon (due to the earth’s curvature) deduced the earth’s shape. But nobody can observe that which is needed to support belief in billions of years.