Will the Supreme Court Uphold Religious Freedom in America?

Will the Supreme Court uphold religious freedom in America?

The world’s largest Christian university, Liberty University in Lynchburg, Virginia, has re-filed its lawsuit petitioning the courts to protect American religious freedom. Liberty Counsel, in 2010, filed the first private lawsuit against ObamaCare, the new health care reform law, on the day the President signed it. The suit maintains that the law’s mandate requiring businesses and individuals to finance the destruction of unborn children is a violation of religious freedom.

Liberty Counsel, which filed the suit on behalf of Liberty University and private citizens, asserts that Congress has exceeded its constitutional authority. Attorney Mat Staver is dean of Liberty University School of Law and founder of Liberty Counsel, a non-profit defender of religious freedom, the family, and sanctity of life.1 During a phone interview yesterday, Mr. Staver explained that ObamaCare’s provisions empower bureaucrats (who are typically not elected officials) to force individuals and businesses to purchase particular sorts of insurance benefits. These unprecedented provisions overstep congressional authority and trample on the constitutional rights of all employers. In addition, ObamaCare infringes upon the Free Exercise of Religion.

“ObamaCare is the biggest funding of abortion in American history,” said Staver in an October press release. “Under the Health and Human Services (HHS) mandate, ObamaCare will for the first time require employers and individuals to directly fund abortion. This abortion mandate collides with religious freedom and the rights of conscience.”

Requiring people to pay for abortifacient medications is morally the same as requiring them to pay for conventional abortions.

Requiring people to pay for abortifacient medications is morally the same as requiring them to pay for conventional abortions. “ObamaCare’s forced funding of abortion is unconstitutional under the First Amendment Free Exercise of Religion Clause and the federal Religious Freedom Restoration Act,” Liberty Counsel explained.2 Institutions and business owners that refuse to violate their Christian principles in this matter face an onerous fine. Any sort of fine for practicing religion is a violation of our constitutionally protected freedom, but the punitive figure is $10 million per year.3

These photos of the White House (left), the Capitol (right), and the Supreme Court (below), representing the three branches of the United States government, remind Americans of their constitutionally protected liberties. The United States Constitution balanced power among the three branches—vested in the President, the Congress, and the courts—in order to protect Americans from violation of their rights by any one or two branches. The first ten amendments describe a number of rights that the original states and our country’s founders believed to be at greatest risk. The first right they protected was the right to religious freedom. Many, including people in Europe and in the original 13 colonies, lacked religious freedom. Fines and imprisonments were often imposed against those whose religious practices violated governmental regulations. Our founders therefore wrote, “Congress shall make no law respecting an establishment of religion, or prohibiting the free exercise thereof.” Yet the new health care law—“Affordable Care for Americans” (ObamaCare)—contains provisions for fining Christian business owners and Christian institutions ($10 million per year, incidentally, though any figure is an outrage) if they stand by their religious convictions upholding the sanctity of life by refusing to provide abortifacients to their employees (Image credit: Dr. Elizabeth Mitchell).

The First Amendment of the Constitution of the United States opens with the promise, “Congress shall make no law respecting an establishment of religion, or prohibiting the free exercise thereof.” To be fined for religious practices the government considers objectionable is a clear violation of the amendment’s guarantee. By imposing such a fine the government, in effect, prohibits the free exercise of religious convictions upholding the sanctity of human life. 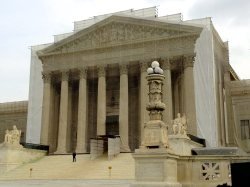 The Supreme Court in Washington, DC, is wearing a painted tarpaulin while the building has a facelift. Will the High Court take a genuine stand to protect our religious freedom or—like the shroud it currently wears—only retain a ghostly remembrance of the liberty it is supposed to protect?

The 4th Circuit Court dismissed the original lawsuit unheard, but the Supreme Court has since overturned the circuit court’s reasoning. Staver explained that Liberty’s suit had been dismissed—not on its merits—but on the ground that the Anti-Injunction Act (AIA) bars any sort of injunction pre-empting collection of a tax. The Supreme Court has since ruled that fines imposed for refusal to comply are not “taxes” but “penalties.” Penalties do not fall under the purview of the AIA.

After initially rejecting Liberty’s request to have the case reexamined, the High Court, in a very unusual move, Staver explained, granted Liberty’s Petition for Rehearing. Considering this a reason for optimism, he said, “Our fight against ObamaCare is far from over.” He indicated that the High Court’s reversal and willingness to have the case heard suggests that some of the justices wish to examine “the merits of the case” more closely.

Some people fail to realize that abortifacient medications at issue are not ordinary contraceptives. Abortifacients prevent or disrupt the implantation of an embryo. Under the new law, businesses must provide medical coverage for these drugs as a “contraceptive” benefit. But the “morning-after pill” and the “week-after pill” destroy the lives of unborn human beings. They prevent the implantation of an embryo or destroy an embryo soon after implantation. Being required to provide this “service” violates the Christian principles of many American institutions and business owners who, unlike churches, are not exempt from the law.4

Some courts around the country have granted temporary exemptions from the murderous mandate, and others have not. A judge in Oklahoma, for instance, has “ruled the business regulations governing craft chain Hobby Lobby trumped its owners’ religious beliefs.” Will the 4th Circuit Court, and the Supreme Court after it, fulfill their constitutional obligations to protect our religious freedom? Or will they allow Congress and the President to chisel it away? We must all pray and wait to find out.

Read more about the historical path to religious freedom in America in “The First Amendment and Abortion.” The idea of paying a fine to practice your religion should chill every American, even those who don’t oppose the use of abortifacients. Our hard-won religious freedom is too precious to surrender.