How can we rescue them?

AiG President Ken Ham addresses how, more than ever in our increasingly secularized culture, Christians need to actively rescue our children.

More than ever in our increasingly secularized culture, Christians need to actively rescue our children. Regarding this need for rescue, I think of Galatians 1:4; it declares that Jesus Christ “gave himself for our sins so that He might rescue us from this present evil age, according to the will of our God and Father.” 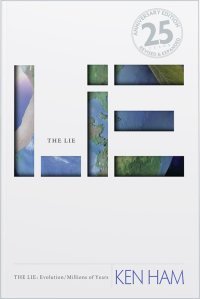 The Lie
Understand the importance of Christians taking Genesis as literal history and not compromising God’s Word with evolution or millions of years. Order the Book

When we consider this “rescue,” believers usually think of rescuing children from secular humanists who are actively trying to pull children away from God’s Word. But the Bible warns us about another group of people from whom our children need to be rescued: “‘Woe to the shepherds who destroy and scatter the sheep of My pasture!’ says the Lord” (Jeremiah 23:1).

I thought of this verse recently when I watched a segment of the 700 Club TV program, hosted by Pat Robertson.1 A lady had written to him the following message, which he read on the air:

I have three teenage boys and now two of them are questioning the Bible. This scares me! They tell me if the Bible is truth, then I should be able to reasonably explain the existence of dinosaurs. This is just one of the many things they question. Even my husband is agreeing with them.

How do I explain things to them that the Bible doesn’t cover? I am so afraid that they are walking away from God. My biggest fear is not to have my children and husband next to me in God’s Kingdom.

Look, I know people will probably try to lynch me when I say this, but Bishop Ussher, God bless him, wasn’t inspired by the Lord when he said that it all took 6,000 years. It just didn’t. And you go back in time, you’ve got radiocarbon dating. You got all these things and you’ve got the carcasses of dinosaurs frozen in time out in the Dakotas . . .

They’re out there and so, there was a time when these giant reptiles were on the Earth and it was before the time of the Bible. So, don’t try to cover it up and make like everything was 6,000 years. That’s not the Bible . . . If you fight real science, you’re going to lose your children, and I believe in telling it the way it was. 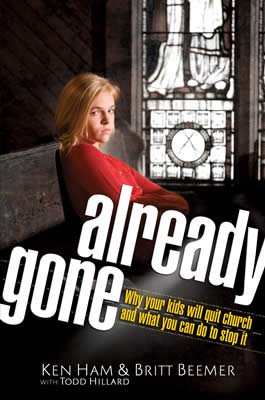 Already Gone
The next generation is calling it quits on the traditional church. This powerful book reveals shocking trends and offers wisdom on how to win back our families, our churches, and our world! Order the Book | Read Online

I pray this lady does not accept Pat Robertson’s destructive advice. This televangelist does not understand that the Bible includes references to huge land-dwelling creatures—what we would call dinosaurs—that lived at the same time as man. Furthermore, he does not understand the difference between historical and observational science. Plus, he apparently does not understand carbon dating, which has nothing to do with millions of years.

As he has in the past, Pat Robertson mocked those of us who take a stand on a young earth. He essentially told this deeply concerned woman to make sure her children believe what the secularists say about earth history. Sadly, this kind of approach is a major reason children are walking away from Christ and from the church in unbelief—not because of the teachings of biblical creationists.

Though he has done much good (especially in humanitarian relief work), Pat Robertson is similar to the compromising shepherds we discuss in my book Already Gone. This coauthored book with renowned researcher Britt Beemer summarizes the detailed research into why two-thirds of young people walk away from the church.

One of the major reasons for the youth exodus, which our research revealed, was that young people saw this kind of biblical compromise as hypocrisy. On the one hand this shepherd tells people to believe the Bible, but on the other he tells them they shouldn’t believe Genesis as written. Instead, he argues that our children should believe what anti-God secularists say about earth history.

In October, we released the new Answers in Genesis theme for the next two years. There is an increasing emphasis by secular evolutionary humanists to try to stop kids from hearing the truth about creation and to teach them evolution/millions of years as fact. So we decided that the theme should center around reaching the current generation of children—and coming generations—and doing so in a very active way. The theme is “Standing Our Ground, Rescuing Our Kids.”

As we embark on a new year of ministry that reaches around the world, we at AiG will be doing our best to help rescue kids (and adults) from this present evil age by directing them to the Savior and showing them that His Word can be trusted. But we also need to rescue children and teens from the destructive teaching of shepherds who compromise God’s Word and lead our children astray.