From Ararat to the Americas—In a Few Thousand Years?

A reader from Arizona asks about how the people spread out over the world after the Flood and about Ussher’s date of creation.

I have two questions:

Thank you for your wonderful work -- the information you provide has revitalized my faith and strengthens my walk daily.

There are several ways to migrate to different parts of the world—over land is the most obvious, but I wouldn’t discount sea migration either.

From Babel, we would expect that civilizations closer to the region would be settled first and then those farther away. Initial civilizations such as Babylon, Egypt, and Greece were among the first to rise. Larry Pierce has a good article describing this—see “In the Days of Peleg.”

First, most Native Americans likely came across the Bering Strait from Asia to Alaska. From there, they went south and spread throughout the continent and on down to Central and South America.

Mike Oard says in his book Frozen in Time,

It would have taken most of the Ice Age for there to be enough snow and ice piled up on the land to expose the shallow Bering Strait. (p. 130)

This is based on the current depth of the Bering Strait, which Mike Oard believes was a bit shallower in the early stages of the Ice Age. This would allow land to appear a little sooner than 400 years after Babel, which would have been a “short window” for people to cross.

Also, Mike Oard mentions on page 132 of Frozen in Time,

Sixty years is a crude back-of-the-envelop calculation to estimate the minimum time it would take to reach South America. The actual migration would likely have been more complicated and slower. Migration could have happened in spurts. Some tribes could have settled for a while in a location before moving on. (Emphasis in original)

Oard calculates that migrating people could make it to South America in a minimum of about 60 years. I completely agree that this was not the most likely scenario. As Oard points out, the migrations would be slower than this, probably in spurts.

It would take time to travel, as a tribe would probably settle in an area for a while before moving on. These spurts would include the time to get to the Bering Strait from the Middle East as well as the time to spread through the Americas. 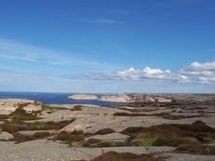 So logically, a couple of hundred years would be ample time to spread across Asia to the Bering Strait. Many of the first travelers to the Americas probably arrived about 200–500 years after the Flood, or 100–400 years after Babel, at about 2142 BC to about 1842 BC (again based on Ussher’s dates). In the same way, such land bridges would be exposed to Australia, which has an extensive, shallow continental shelf to its north that connects with islands in Southeast Asia.

There is quite a bit of evidence left behind that confirms the extent of the Ice Age in North America and Europe. Notice the photo I took of the landscape in Sweden (which has numerous glacial lakes) last August in Kungshamn that shows some of rocky terrain where the ice rubbed across it.

Another method of entry to the Americas and Australia—by boat. We need to remember that Noah was a capable shipbuilder, as were his sons.

I don’t want to overlook another method of entry to the Americas and Australia—by boat. We need to remember that Noah was a capable shipbuilder, as were his sons. Noah lived for nearly 350 years after the Flood, until 1998 BC (according to Ussher). Noah and his sons, such as Shem, who died in 1846 BC, would also have been alive during and after the Tower of Babel, when people were scattered.

So they could easily have passed along boat-building skills or even helped build some boats themselves. Many ancient boats were quite large (as Larry Pierce indicated in his article “The Large Ships of Antiquity”), so it wouldn’t surprise me if many people traveled by ship. Some modern experiments indicate that even simple, smaller boats, such as Ra II (made from totora reeds), have even been able to cross the Atlantic Ocean.1

Boats explain how Hawaiian people arrived at Hawaii as well as other islands that have even older civilizations. Mayan history claims a legendary leader, Itzamna (who has been deemed “godlike” since), who brought them from the Far East through the water.2 It is difficult to say when the Mayan civilization began and when the earlier Olmec civilization (which we know little about) left off. This leader could very well been the one who brought the Olmec people to Middle America by boat.

Also, some could have come by boat across the Atlantic from Europe or Africa and mixed as well. Those arriving by boat—whether from Asia, Europe, Africa or other places—would not have been limited to the time the Bering Strait land bridge was accessible. Some could have come earlier or even much later.

Ussher did some fantastic calculations, though we are not dogmatic about his exact date. This is why those of us at Answers in Genesis prefer to say about 6,000 years for the age of the Earth. This article discusses the reasons behind Ussher’s choice of October 23, 4004 BC:

Because the Jews and many other ancient peoples started their year in the autumn, Ussher assumed there must be a good reason for it. He therefore concluded that God created the world in the autumn. After consulting astronomical tables, he picked the first Sunday on or after the autumnal equinox to begin the year 4004 BC.

But the equinox occurs around September 21, not October 23. At least, it does now, thanks to some juggling of the calendar. In his research Ussher found that the ancient Jews and the Egyptians did not use the orbit of the moon (lunar calendar) as the basis for their year. Instead, their year was made up of twelve months, each thirty days long. At the end of their year they tacked on five days, and every fourth year they added six days. However, a year of 365 days is too short, and one of exactly 365.25 days is too long. They had to drop days from it every now and then to keep the seasons from drifting.

When Julius Caesar reformed the calendar, he adopted basically the same system we now use, with twelve months of various lengths. However, even with his reforms, the seasons began to drift. By the 1700s the English calendar was off by eleven days. On September 2, 1752, eleven days were dropped from the English calendar to make the seasons start when they were supposed to. Another day was dropped in 1800 and again in 1900. These years would normally have been leap years, but instead were made normal years to keep the calendar in line. Today we use the Gregorian calendar, which is a refinement of the Julian calendar.

Before Julius Caesar’s reform, no correcting adjustments were made to the calendar. When we consider the four thousand years between Caesar’s time and the time of creation, almost thirty-two days have to be dropped to make the seasons start when they should. By making these adjustments, Ussher arrived at the date of October 23, not September 21. However, when the Gregorian calendar corrections are applied to the Julian date of October 23, 4004 BC, we get the Gregorian date September 21, 4004 BC, which is the normal day for the autumnal equinox.

Indeed, Ussher was very clever, but I wouldn’t be dogmatic about the exact day. After all, man is fallible. For example, Ussher made a slight mistake and included a year 0, which didn’t exist—the calendar went straight from 1 BC to AD 1. So really the date should have been 4003 BC to be slightly more accurate. Regardless, several others have calculated and come up with dates similar to Ussher, but it is not my place to enter the debate of the precise number or day of the year. This is why we often appeal to Ussher’s or Jones’ established chronologies.

Thank you for your wonderful work -- the information you provide has revitalized my faith and strengthens my walk daily.

I pray this helps a bit.

Previous Article Is This Answer in Genesis? Next Article Does Answers in Genesis Accept “Billions of Years”?