Earlier this year at their annual convention, the American Association for the Advancement of Science (the world’s largest scientific society) featured several sessions on the teaching of origins in America’s public schools. Seminars (with titles like “Anti-evolutionism in America” and “Science Under Attack”) saw many speakers stridently denunciate Christian “fundamentalists” who, they shrieked, seek the end of all science. 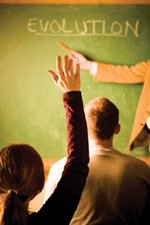 Ironically, the most vocal anti-creationist speaker was the noted Jesuit astronomer George Coyne. As the director of the Vatican Observatory outside Rome, Father Coyne declared that “if God is a scientist, He is a poor one.” He assured his audience that “God is not an engineer or a designer of the universe” and that if He were “that would belittle God.”

Evolutionists understand that the origins question is still not settled as far as the public is concerned (see poll on page 10). Evolutionists, even with their recent successes in the courts and school boards in checking intelligent design efforts, will not become complacent. They will continue to crush any attempt to question Darwin, and will, at the same time, teach evolution more dogmatically.

Despite the lip service some of the 9,000 convention attendees might pay toward a supreme being, the initials AAAS might better be translated: Advancing Atheistic Attitudes in Science.