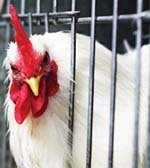 As the bird flu travels across Asia, Africa and Europe with about 100 human deaths in its wake (at the time of this article’s printing), there is much talk in the media of a possible widespread epidemic (i.e., a pandemic) which could claim many more human lives. The most recent reports indicate that the bird flu has now reached the UK. Tests on a dead swan confirmed that it was infected with the bird flu virus (called the H5N1 virus). Britain’s government has responded with caution and calmness by restricting poultry shipping and possibly enlarging protection around its harbors.1

To counteract the fear this virus causes, governments and industries are attempting to educate the public with a basic understanding of the virus and the precautionary measures to take against it, but some media outlets (e.g., ABC News declaring “Evolution of bird flu is still a concern”2 ) attempt to bring in a false evolutionary connection to the avian influenza. Because H5N1 is changing, the fear is that a pandemic might occur if the virus continues to mutate, and thus be more easily transmitted from bird to person and then person to person.3

This change in the virus, however, has nothing to do with molecules-to-man evolution, and it is important for us to know the truth about this virus (see Bird Flu: Has It Evolved? on page 49).