Less Than 5% of Australian Freshmen Are Creationists

Australian politics are a mess right now with Prime Minister Malcolm Turnbull being ousted by his own party and a new Prime Minister being installed—the fifth Prime Minister in as many years. Former Prime Minister Turnbull has been given credit—and has even claimed it himself—for legalizing gay “marriage” late last year. In a recent interview, he said it was one of his great achievements. What does this have to do with the title of this article?

It’s clear there’s a spiritual war going on throughout the West. We’re seeing it increasingly in the United States, Canada, Europe, and Australia. Culture and society are in an upheaval, and chaos reigns. Why? Well, as the Christian and even nominal biblical influence wanes (and, I believe, as God removes his restraining hand from a culture in rebellion against him), everyone does what’s right in his or her own eyes. Without an ultimate moral authority, chaos becomes the norm, for there’s no standard by which to discern right from wrong, other than opinion.

Western nations are simply seeing the fruit of their rebellion against God and his Word (Judges 21:25)

An easy way to gauge how a culture is treating God’s Word is by looking at their beliefs about origins. The Bible’s account of origins stands in stark contrast to the secular evolutionary story. In a biblical worldview, God created everything just a few thousand years ago by the power of his word. In a secular worldview, the universe, the earth, and life are the result of billions of years of random processes and descent from a common ancestor.

An Australian secular humanist (Skeptic of the Year in 1998) and anti-God professor, Michael Archer, has been polling first-year university students for 32 years regarding their beliefs about origins. And, according to a new study published in a journal specifically designed to counter creation and intelligent design, it is

clear that belief among students that a god is the ultimate or contributing cause of human origins has steeply declined from being a majority view in 1986 to being a small minority view in 2017. Conversely, conviction that humans evolved without divine involvement of any kind rose steeply over the same period to become the dominant view among students.

The journal article claims that in 1986, 60 percent of students believed “a god had something to do with the origin of humans”—this is known as theistic evolution and is a compromise position many Christians hold to, sadly—but in 2017 only 29 percent held this position. Those who believe in naturalistic evolution (that no god had anything to do with the process of human evolution) has apparently increased from just 25 percent of freshmen in 1986 to 62 percent as of last year. Those who hold to a creationist position, defined by the study as those believing “God created people (Homo sapiens) pretty much in their present form at sometime within the last 10,000 years,” made up just over 10 percent in 1986 and now comprise only 5 percent of incoming freshmen. 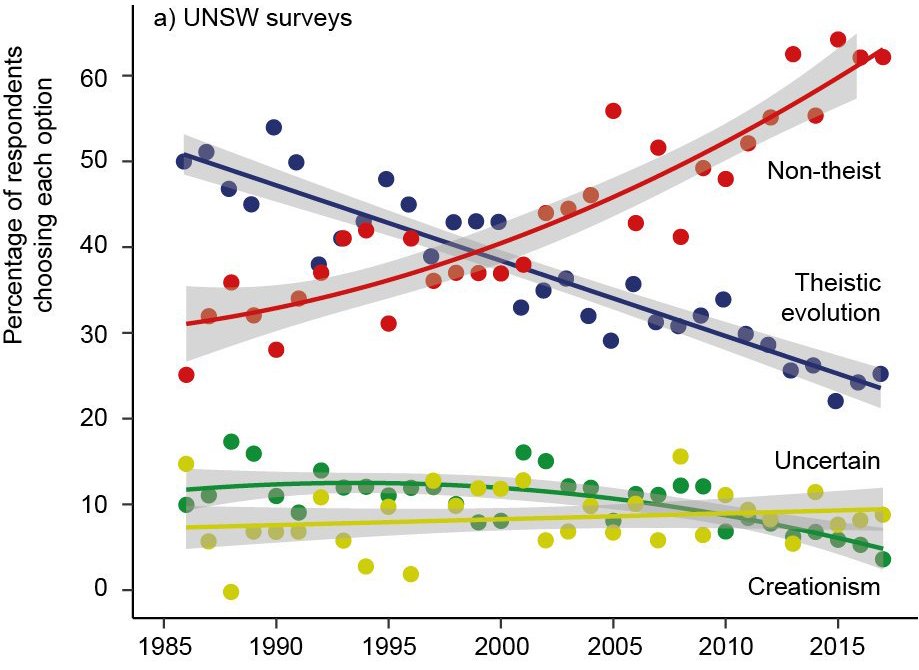 Graph showing the trends from the study via phys.org.

It’s unsurprising that many young people are taking the short step from believing in theistic evolution to believing in atheistic evolution. They recognize the hypocrisy of ignoring what God’s Word clearly teaches in Genesis and reinterpreting it to match what secular scientists, many of whom are atheists, claim. We’ve warned churches and believers for years not to compromise God’s Word—it only leads to unbelief and other serious consequences.

God hates compromise! He frequently judged the nation of Israel for their sinful compromise with the pagan religions of their day, highlighting his hatred of this age-old attempt to mix two religions together. Compromise casts doubt on God’s Word, leads to disobedience, and causes us to become less effective: “You are the salt of the earth, but if salt has lost its taste, how shall its saltiness be restored? It is no longer good for anything except to be thrown out and trampled under people's feet” (Matthew 5:13).

An “Erosion of the Gullibility of the Public”?

In an article published by The Sydney Morning Herald, Professor Archer seems almost gleeful that the number of creationists and even theistic evolutionists has dropped so dramatically in just three decades. He says,

I am convinced we are seeing a steady erosion of the gullibility of the public. . . . [When I first started asking this question] my colleagues thought it was a ridiculous question . . . They thought nobody in their right mind would be a creationist in Australia.

He says he was “relieved” the numbers were so low, but his colleagues were shocked there were that many people who believed in creation and theistic evolution. He credits the decline to the internet:

The web is filled with solid explanations about the whole world, including people. . . . When you give people access to actual information, superstitions struggle to survive.

But, really, this is a sad reflection of the way the secular education system has brainwashed generations of students in the religion of evolution and the failure of the church to teach apologetics or take a stand on Genesis. Young people are evangelized in the religion of naturalism and evolution every day in government-run schools, and many churches have put little effort into equipping young people to trust the Bible and stand boldly for truth. Even worse, many churches have encouraged compromise with evolutionary ideas and have twisted God’s Word to try to fit with today’s secular worldview.

This research really highlights the need for ministries like Answers in Genesis in Australia to combat the tidal wave of evolutionary teaching.

The same article mentions that “40 percent of people still believe God created man” in the United States, a much higher percentage than in Australia. In the 1970s, God called me from Australia to move to the United States as a missionary to the church there, calling her back to the authority of God’s Word from the very beginning. I believe Answers in Genesis and the millions of resources we’ve produced, including our extremely well-trafficked website, along with our Creation Museum and Ark Encounter (the world’s leading two Christian-themed attractions), have greatly contributed to the strong belief in creation that US polls show. It’s also why atheist groups hate us and show so much animosity as we expand.

But we want to reach people all over the world, not just here in the United States. I’m thrilled that we now have an outreach in Australia and New Zealand.1 This outreach includes a warehouse and store so Aussies can order resources without paying costly international shipping and customs fees.

We pray this Australian outreach will strengthen the church Down Under and will embolden them to share the good news of the gospel with others, having answers for the skeptical questions of our day.

Hear Ken Ham on the Sunshine Coast or in Brisbane

I will be headed to Australia soon to speak twice on September 9, 2018: first on the Sunshine Coast in North Buderim, Queensland, and later, in the evening, near Brisbane in Holland West Park, Queensland. Both of these events are free, and I encourage you to attend. I believe you will be encouraged and equipped by the message of the relevance of Genesis to what is happening in our culture and churches.

Learn more on the outreach page of our website.