If Ye Believe Not

Many professing Christians attempt to embrace Jesus as Savior while rejecting Him as Creator. They put their faith in evolution to explain man’s origin and reject the history presented in Genesis.

In Tulsa, Oklahoma’s Memorial Park Cemetery, a visitor can find “The Chapel of Saints Valley.” Inside, a stained glass window features a paraphrase of John 5:46–47 and Luke 16:31 (quoting Christ).

Over the Memorial Day weekend I had the opportunity to visit the “Chapel of Saints Valley.” The chapel is noted for its beautiful stained-glass window featuring the prophets Ezekiel, Daniel, Jeremiah and Isaiah. At their feet are written these words: “IF YE BELIEVE NOT IN MOSES AND THE PROPHETS, YE CAN NOT BELIEVE IN ME”. 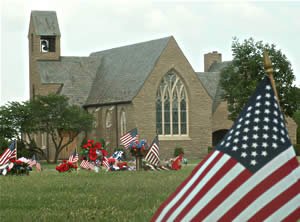 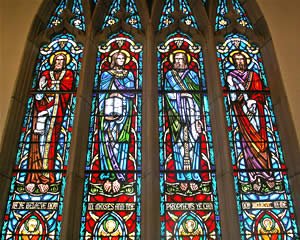 This chapel in Tulsa, Oklahoma was patriotically decorated for Memorial Day a few days ago. A well-known stained glass window inside reminds visitors about what the Bible says about its historicity.

The books of Moses begin, of course, with the six-day creation found in Genesis. In the Bible’s first book, you can read the accounts of the creation of Adam and Eve, man’s fall into sin, Noah and the worldwide Flood, etc., which are all presented as straightforward history. In the New Testament, Jesus (in the verse above) endorses the Genesis record as truth. Furthermore, Scripture clearly states that it is because of Adam and his sin that Jesus came to this earth as Savior; if there was no Adam, there was no need for Jesus to come to earth.

Today, many professing Christians attempt to embrace Jesus as Savior while rejecting Him as Creator. They put their faith in evolution to explain man’s origin and reject the history presented in Genesis. This position, I would submit, is extremely foolish because Christianity is absolute nonsense without its history. Again, if there was no Adam, there is no need for Jesus.

I remember being told by a deacon at a large church in Tulsa that he believed the first eleven chapters of Genesis should be removed from the Bible because evolution had proven them to be fairy tales. I said to the man, “So, you don’t like Genesis? How do you feel about Exodus—and its miracles?” (In Exodus, we have the finger of God inscribing the tablets of stone, called the Ten Commandments, where the Genesis account of creation is confirmed: “For in six days the Lord made heaven and earth, the sea, and all that is in them, and rested the seventh day” (Exodus 20:11).)

The older I get, the more I am convinced that the creation vs. evolution debate has very little to do with science. Instead, it has everything to do with a person’s choice of either the vacillating theories of men or the unchangeable Word of God. You either believe the words of God or “YE BELIEVE NOT.”

Jesus said: “If they hear not Moses and the prophets, neither will they be persuaded, though one rise from the dead” (Luke 16:31). Also: “For had ye believed Moses, ye would have believed Me; for he wrote of Me. But IF YE BELIEVE NOT his writings, how shall ye believe My words?” (John 5:46,47).

See a previous web article on Mr. Hicks and a creation/evolution controversy at the Tulsa Zoo that stirred the community last year: Genesis Display Rejected at the Tulsa Zoo.