The Tulsa Park and Recreation Board voted Thursday morning (July 7) to drop the previously approved plans to add a creation exhibit at the Tulsa Zoo in Oklahoma, USA. In a standing-room only meeting that prohibited any public discussion, the board voted 3-to-1 to reverse last month’s decision to allow the exhibit. (See Genesis Display Okayed for the Tulsa Zoo.) Mayor Bill LaFortune gave the only dissenting vote.

Dan Hicks, an AiG friend who had convinced the board to allow the privately funded creation display at the zoo, made the following statement immediately following the vote:

“This board has deviated from their past practice of allowing religious displays to be erected without censorship at the Tulsa Zoo by voting today to censor the Genesis account of creation. And in doing so, I believe, it has stepped on the constitutional liberties of Tulsa taxpayers.” 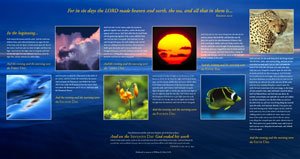 Last month, the board voted 3-to-1 to allow an exhibit presenting the biblical account of creation (pictured right). It was to be put in the zoo’s time gallery that has a display on evolution. Currently there are several religious symbols and idols representing Hindus and Native Americans throughout the zoo.

According to an article in the Tulsa World (July 7), the initial decision to add the Genesis display brought angry responses from opponents, including a newly formed group called Friends of Religion and Science, which collected nearly 2,000 signatures in an online petition asking the park board to reverse its decision.

But according to a local Fox News flash poll, those against the display are in the minority. 76% of respondents voted in favor of having a creation display at the Tulsa Zoo.

As reported in the Tulsa World, Mayor LaFortune said he wants to consider moving other religious displays out of the zoo.

This decision not to include the Genesis account of creation at the Tulsa Zoo is yet another example of the minority censoring creation.

As Hicks commented, “There must be something very special about the Genesis account for opponents to fight so hard to suppress these words.”

“We need more people like Dan Hicks [he is also one of the leaders of the local creation group Southern Plains Creation Society] who are willing to boldly lead the battle to tell people the truth concerning the creation of the universe,” said Ken Ham, president of AiG–USA.