Regional flood around the Black Sea was not the biblical global Flood.

Preparing to air the ABC News special Back to the Beginning, an ABC journalist has dredged up Robert Ballard’s “Black Sea deluge” and claimed it for Noah. Video clips and headlines connect Ballard’s robotic evidence for submerged human habitation beneath the Black Sea to Noah’s Flood. Not surprisingly, the news items declare Noah’s Flood to be mythical. They instead assert the Black Sea catastrophe was the inspiration for the biblical Flood as well as for the flood legends common in many cultures. 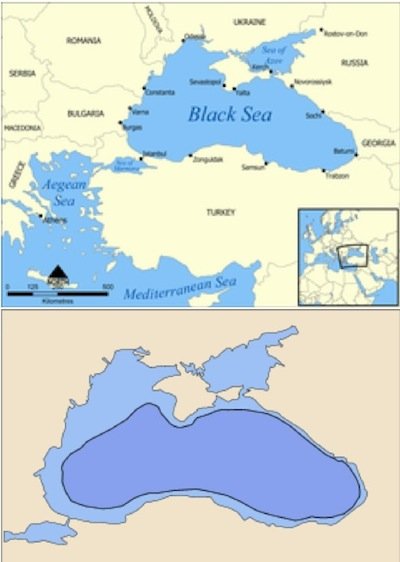 Today the Black Sea is a salty sea connected to the Aegean Sea (and indirectly therefore to the Mediterranean Sea) by the Bosporus Strait, the Sea of Marmara, and the Dardanelles Strait. (See the top map.) Compare today’s Black Sea (light blue in the lower sketch) to the smaller lake (darker blue) it may have been centuries ago. Image credit: en.wikipedia.org/wiki/Black_Sea (top) and en.wikipedia.org/File:Black-sea-hist.png (bottom). 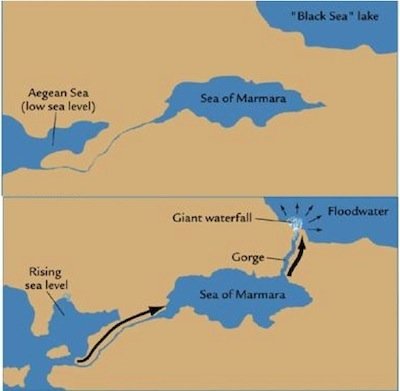 The Black Sea deluge hypothesis is a controversial proposal that asserts the Black Sea was originally a freshwater lake walled off by a land bridge from the Sea of Marmara, in the region now occupied by the Bosporus Strait, shown in the top sketch. Some think the rising water levels in the post-Ice Age world eventually broke through violently (see bottom sketch), submerging civilizations around the Black Sea and establishing the Black Sea as a salty sea. Image credit: NASA/US government illustration from en.wikipedia.org

Titanic discoverer Ballard said in an ABC interview, “It's not a crazy thing to think that the flood stories of the various cultures including ours are based upon true cataclysmic events.” (See “Flood Legends” for more about this idea.)

The Black Sea is fed by rivers as well as by some backflow of saltwater from the Aegean Sea. Saltwater flows in through the Bosporus and Dardanelles Straits deep below the water’s surface. A little more than a decade ago, Columbia University marine geologists William Pitman and William Ryan proposed the still-controversial Black Sea deluge hypothesis as the Black Sea’s origin. They suggested that the Black Sea, originally a freshwater lake filled with melt-water from Ice Age glaciers, was walled off by a land bridge across the Bosporus Strait. Pitman and Ryan, whose theory was soon taken up by Ballard, suggested rising post-Ice Age water levels caused a wall of Mediterranean/Aegean seawater to crash through the land bridge and violently flood the Black Sea basin, forever burying whatever was built along its shores.

Ballard notes (correctly) that the rising waters after the Ice Age would have caused many floods but says, “The question is, was there a mother of all floods?”

Ballard notes (correctly) that the rising waters after the Ice Age would have caused many floods but says, “The question is, was there a mother of all floods?” Inspired by this question, “We went in there to look for the flood. Not just a slow moving, advancing rise of sea level, but a really big flood that then stayed. . . . The land that went under stayed under.”

Evidence for this Black Sea deluge includes freshwater mussel shells in the Black Sea and robotic film of a submerged beach and remnants of human-built structures thought to be pottery and parts of buildings—“not trash and not geology, but characteristic of human habitation,” Ballard said.1 “It probably was a bad day. At some magic moment, it broke through and flooded this place violently, and a lot of real estate, 150,000 square kilometers of land, went under.”

The freshwater mussels carbon date to about 5,000 years old, a time within about five hundred years of the date calculated for Noah’s Flood based on the Bible’s historical record. The mussels are considered evidence for the Black Sea having once been a freshwater lake. Incidentally, this date is considered inflated because freshwater shellfish, which ingest a great deal of long-dead plant material, commonly carbon date much older than their actual age.2

More recent finds have included a well-preserved ancient wooden ship thought to date from about 500 B.C. Ballard does not claim the wrecked ship has anything to do with Noah, but its well-preserved state encourages him to anticipate underwater archaeological remains of people who died in the Black Sea deluge. (The depths of the Black Sea contain little oxygen and therefore slow decay processes.) “It's foolish to think you will ever find a ship [the actual ark, that is],” Ballard said. “But can you find people who were living? Can you find their villages that are underwater now? And the answer is yes.”

The ABC News report discussing the upcoming program treats the biblical Noahic Flood as mythical because it was recorded after other cultures developed their own flood legends. The journalist quotes a rabbi who believes people in Noah’s time could not have lived to the ages described in the Bible. And the journalist interviews others who believe the culturally ubiquitous flood stories were a sort of socio-cultural grief management exercise that people used to give meaning to their personal sorrows in the wake of catastrophic natural disasters, like floods.

We have previously discussed the controversial reports about the Black Sea deluge. A number of scientists have discredited the hypothesis, showing that there is no evidence that Mediterranean water ever flowed violently northward toward the Black Sea.3 The story has been around long enough that Wikipedia covers the controversy pretty well, noting that many scientists accept that a huge flood left shoreline civilizations there submerged, but the direction, speed, source, and violence of the flood is a matter of debate.

But did this Black Sea deluge (from any direction) have anything to do with the Bible’s account of Noah's Flood? Emphatically, no! The Bible clearly describes the Flood in Noah’s time as global, submerging even the highest pre-Flood mountains (Genesis 7:20). Such a violent and catastrophic worldwide flood would have radically remodeled the entire surface of the earth, leaving massive layers of sediment all over the earth’s surface and burying billions of organisms. Much of the fossil record and many of the layers in the geologic column are memorials of that global Flood. Flood geology explains a great deal of what we see in today’s world. But such a global cataclysm would not leave recognizable remnants of human habitats on the bottom of the Black Sea.

Furthermore, ancient people all over the world had flood stories because all cultures of the world descended from the eight people who survived the global Flood on the Ark Noah built. Naturally they had a shared cultural memory of the most significant event in their collective history.

Through divine inspiration Moses recorded the real history of the real Flood about 800–900 years after the Flood in the part of God’s Word we call Genesis. However, the eleven occurrences of the Hebrew word toledoth (translated “this is the genealogy of”) in Genesis divide the book into literary units. The toledoth appearing in Genesis 5:1 opens with the phrase “This is the book of the genealogy of Adam,” and the next one, in Genesis 6:9, opens with the phrase “This is the genealogy of Noah” and then gives the history surrounding Noah's life. This strongly suggests that Moses, under divine inspiration, wrote Genesis on the basis of pre-existing written documents passed down by the patriarchs whose names are connected with the toledoths. The Flood account, in fact, reads like an eyewitness record such as that found in a ship’s log. So, we have good reason to believe that the content of Genesis 1–11 predates the pagan flood myths that were written after the dispersion from the Tower of Babel over 100 years after the Flood.

Furthermore, Jesus Christ, as recorded in Matthew 24:37–38 and Luke 17:26–27, validated Moses’ account of the Flood. To suggest that the Genesis Flood was a local or regional flood, a legendary bandage for grief, or an overblown story inspired by the Black Sea deluge or any other local flood is to misuse God’s Word and to call our all-knowing God a liar.