The Roman pontiff warns the world another “great flood” is coming, “perhaps due” to climate change while ignoring the clear teaching of God’s Word. 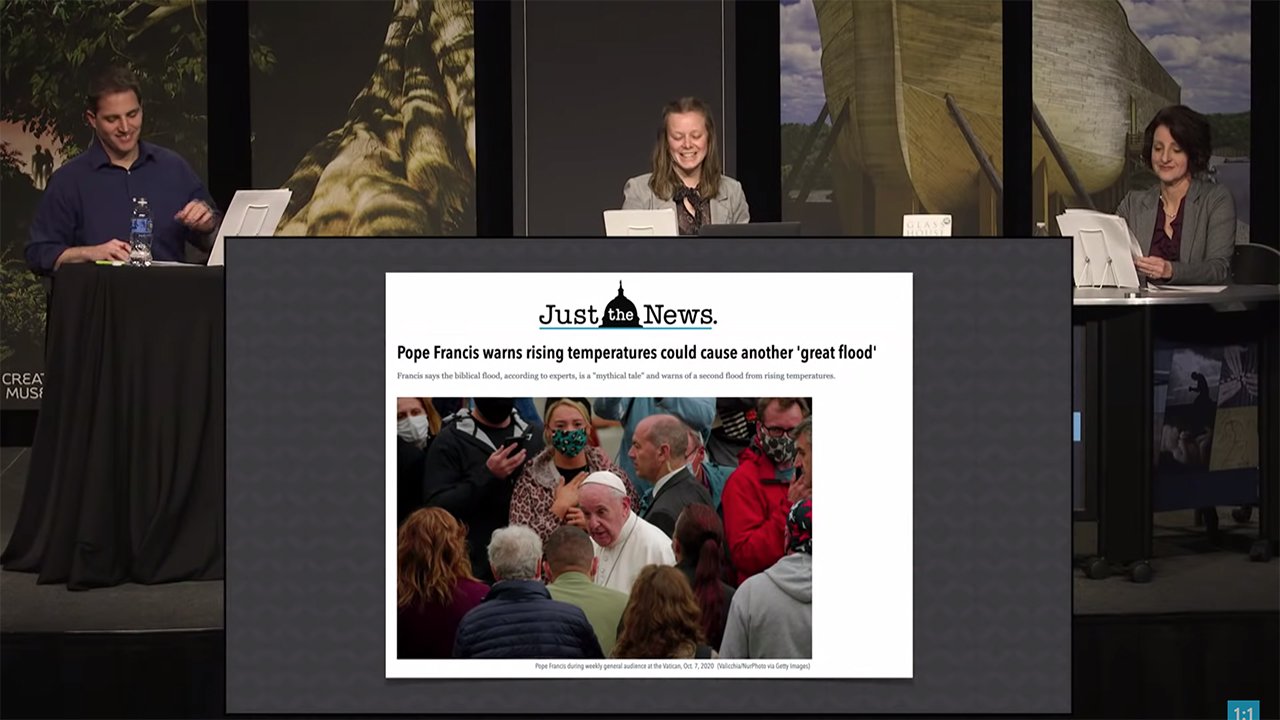 Do we have to worry that another flood of biblical proportions is on its way? Well, according to a recent interview, Pope Francis thinks so. Now, we take what any person says and hold it up to the ultimate authority: the Word of God. And God’s Word is clear: there will never be another flood like the flood of Genesis chapters 6–8 (more on that below). But if God’s Word is clear, why does Pope Francis suggest another “great flood” might happen?

Keep in mind that many church leaders (Baptist, Presbyterian, Lutheran, Methodist, etc.) sadly would actually agree with Pope Francis of the Roman Catholic Church. Pope Francis made these statements recently, so let’s analyze them as they also represent compromise that is rampant throughout non-Catholic churches.

Well, let’s take a look at what Pope Francis said about the flood during the interview:

The Bible says that the flood is the result of God’s wrath . . . It is a figure of God’s wrath, who according to the Bible has seen too many bad things and decides to obliterate humanity.

Notice he calls the flood a “figure” of God’s wrath—implying it wasn’t a historical event, just a metaphor (more on that below). He then says that because God had “seen too many bad things,” he obliterates humanity. Here’s what the text of Genesis says:

The Lord saw that the wickedness of man was great in the earth, and that every intention of the thoughts of his heart was only evil continually. And the Lord regretted that he had made man on the earth, and it grieved him to his heart. So the Lord said, “I will blot out man whom I have created from the face of the land, man and animals and creeping things and birds of the heavens, for I am sorry that I have made them.” (Genesis 6:5–7)

God’s judgments on sin aren’t because he “sees too many bad things”—they are because sin is a great offense against a holy God, and it must be judged. God is gracious and gives people time to repent and a way of escape (in this case, the ark, and today in Christ), but he always judges sin—and the penalty for sin is death (Romans 6:23). We see that from Genesis chapter 3 onward throughout all of Scripture.

The biblical flood, according to experts, is a mythical tale . . . The flood is a historical tale, archaeologists say, because they found traces of a flood in their excavations.

Here you clearly see who Pope Francis’ ultimate authority is: man. He believes the flood must be a mythical event because “experts” (who ignore the vast evidence around us to the contrary!) say there never was a global flood. According to the Pope, it doesn’t matter that Genesis clearly teaches it and that Jesus and the apostle Peter both believed in an actual flood. But since “experts” say it didn’t happen, Pope Francis doesn’t believe the global flood happened. His authority isn’t God and his Word—his authority is sinful, fallible man.

Right after calling the flood a “mythical tale,” the pope says it was a “historical tale” because (and again note his authority) “archaeologists say” they’ve found “traces of a flood.” How can it be both a mythical tale and a historical tale? Well, it appears he is saying there was a local flood that was regionalized to somewhere in Mesopotamia. So it was historical in that there was a local flood, but it’s mythical in that the biblical text exaggerates the (its claimed) extent of the flood to make it sound global. Again, man is his authority—not God and his very clear Word. God’s Word teaches this was a global, earth-covering flood.

So why the warning that another global flood might happen?

A great flood, perhaps due to a rise in temperature and the melting of the glaciers, is what will happen now if we continue along the same path.

Two words: climate change. It doesn’t matter that God promised no such thing would ever happen again:

And God said, “This is the sign of the covenant that I make between me and you and every living creature that is with you, for all future generations: I have set my bow in the cloud, and it shall be a sign of the covenant between me and the earth. When I bring clouds over the earth and the bow is seen in the clouds, I will remember my covenant that is between me and you and every living creature of all flesh. And the waters shall never again become a flood to destroy all flesh.” (Genesis 9:12–15)

Of course, if you reject the global flood, this promise in Genesis means nothing! There’s been many devastating regional floods since the time of Noah. The everlasting promise of Genesis 9 only makes sense within the context of a global flood. So, because of how he views the history in Genesis and the Word of God as a whole, the Pope can reject this promise as well.

But, while we must be good stewards and exercise wise dominion over creation, we don’t have to worry that mankind is going to destroy earth’s climate because God has promised:

While the earth remains, seedtime and harvest, cold and heat, summer and winter, day and night, shall not cease. (Genesis 8:22)

We must always start with the perfect, inerrant, authoritative, and clear Word of God.

We must not start with the thinking of our day and allow it to influence our beliefs. We must always start with the perfect, inerrant, authoritative, and clear Word of God. And it tells us, yes, there was a global flood (about 4,300 years ago) when God judged sin, and no, there won’t be another global one. When God judged sin at the time of Noah, he provided a way of salvation—the ark. God will judge sin again with a global event (this time with fire, see 2 Peter 3:7), but he has provided a way of salvation, the Lord Jesus Christ. Jesus died in our place, taking the penalty of death that we deserve because of our sin upon himself. Then he rose again, defeating sin and death, and now offers eternal life as a free gift to all who will repent. We are saved from God’s judgment on sin because Jesus took our judgment for us! Praise God! That warning of judgment and message of hope is what the whole world needs to hear.

This item was discussed yesterday on Answers News with cohosts Avery Foley, Dr. Jennifer Rivera, and Bryan Osborne. Answers News is our twice-weekly news program filmed live before a studio audience here at the Creation Museum and broadcast on my Facebook page and the Answers in Genesis Facebook page. We also covered the following topics:

Watch the entire episode of Answers News for March 10, 2021.