Inherit the Wind has probably done more to undermine biblical authority and accuracy than any other film in history.

A just-released list of popular movies is not the typical “best 25 movies of all time” or even the occasional “movies that changed America” selections.1 And last night on American television, CBS broadcast a three-hour TV special on the “100 most inspiring movies” of all time. But what particularly caught our eye this week was Entertainment Weekly’s [EW] (the magazine’s June 16 issue) and its “25 most controversial movies of all time.” 2

Interestingly, in the top 13 of these shocking films there were three about the life of Christ: the blasphemous The Last Temptation of Christ (1988), Mel Gibson’s intense The Passion of the Christ (2004), and the current The Da Vinci Code (which claims that Christ had children through Mary Magdalene, and that the female descendants were prevented from taking their rightful place to lead the Catholic Church—see our review at The Da Vinci Code . . . The Movie, the Myth and What to Do about It). 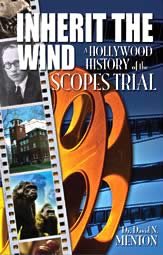 Read this informative handbook complete with historical pictures to get the real facts about the Scopes trial. Find out more.

As I scanned the list of the 25 shocking movies, I noticed what I would call an omission—a missing film that had a Christian theme as well: the mocking-of-Christianity film Inherit the Wind (1960). Although this was a fictionalized account of the Scopes “monkey trial” of 1925 in Dayton, Tennessee, most Americans, according to Scopes trial researcher Dr. David Menton of AiG, accept the film as an accurate depiction of what happened at the so-called “trial of the century.” That film, while only somewhat controversial in its day (there were not many creation groups in the ‘60s to counter the horrible misrepresentations made regarding the trial and Christianity), 46 years later, the movie and play remain controversial. And as the culture wars heat up in America, the movie is now watched in probably more schools than all of EW’s 25 controversial movies combined. (In addition, every few years a remake of Inherit the Wind gets produced for prime-time television, a distinction that is not largely shared by the 25 controversial films found in the magazine’s list.3)

Inherit the Wind has probably done more to undermine biblical authority and accuracy than any other film in history (although history may judge the new Da Vinci Code movie to be its rival one day). For a fascinating look at the 1925 trial (and the corresponding 1960 film) and its impact on America, read Dr. Menton’s eye-opening article at An “Expected” Slant? or purchase his new 32-page handbook Inherit the Wind—A Hollywood History of the Scopes Trial. You’ll see how this court battle and the films/plays inspired by it have led so many people to believe that evolution is true and that the account of origins in Genesis is false—and that Christians can’t adequately defend their faith.

In fact, take this quiz and see if you have been influenced by Hollywood’s portrayal of this major court case. Your test results might be a real shock.