Wednesday evening (April 12) on American national television, the History Channel will present “Scopes: The battle over America’s soul.” AiG is somewhat concerned about how the trial and Christians of that day will be presented.

It is part of the History Channel’s ten-segment series running all this week entitled 10 Days That Unexpectedly Changed America. These are ten events that unexpectedly (that is the key theme in all of the programs) “triggered seismic shifts in America’s political, cultural or social landscape” (as the Channel’s website declares).

While AiG would definitely agree that the Scope’s “monkey trial” of 1925 in Tennessee was a huge turning point in American history (see The Scopes Trial … What’s the Big Deal?), we are somewhat concerned with how the trial—and the Christians of the time—will be portrayed in the new documentary. For example, the History Channel’s website states (in the “day/history” section devoted to the trial) that the Tennessee legislature passed a law (the Butler Act) that made it illegal for public schools to teach evolution, and in another web section, it declares that Scopes was a science teacher. Both items are false. As we will demonstrate in extracts (below) from our new AiG booklet “Inherit the Wind: A Hollywood History of the Scopes Trial,” teachers were free to teach evolution in the state as long as they did not say that humans evolved from animals. 1 Also, Scopes was not a science teacher and never taught evolution. Therefore, with this background, we will watch Wednesday evening’s program very carefully.

For the moment, we are pleased to offer you an excerpt of this brand-new AiG booklet written by Dr. David Menton (Ph.D., Brown University) that dispels several of the myths surrounding the “trial of the century,” especially as perpetuated by the horribly inaccurate 1960 Hollywood docu-drama Inherit the Wind.2

First published in
Inherit the Wind: A Hollywood History of the Scopes Trial
2006

The movie begins with an off-key vocal dirge on the song “Old Time Religion” repeated for numerous choruses. Drums pound ominously in the background as sinister men (clergymen and businessmen) gather to do foul deeds in the name of God.

They intrude into the biology classroom where John Scopes is caught teaching evolution with enthusiasm and conviction, and there indict Scopes for breaking the law against teaching evolution. Scopes is immediately jailed and, when not in the courtroom, remains in jail throughout the trial.

Out of fear, Scopes sends a letter to a newspaper requesting help, assuming it would appear—that the news media can always be counted on to defend evolutionism. The notorious reporter and editorialist H.L. Mencken comes to the rescue and enlists the aid of the famous trial lawyer, Clarence Darrow. And none too soon, for the fundamentalist Christians of Dayton hate John Scopes and gather outside his jail cell window to throw things at him and chant that they are going to lynch him.

First, no one visited John Scopes’ classroom. Scopes was not a biology teacher. Scopes only filled in for two weeks near the end of the school year for the biology teacher, Mr. Ferguson, who was ill.

Scopes didn’t even have a college degree in science (he had an undergraduate major in law at the University of Kentucky). He was hired to teach math and also coach the football team. The team improved during the year under Scopes and he was generally well liked by the people of Rhea County. It does not appear that anyone outside his school knew or cared what Scopes taught in school.

Scopes maintained to his death in 1970 that he never taught evolution during the two weeks he substituted for the biology teacher.

Scopes maintained to his death in 1970 that he never taught evolution during the two weeks he substituted for the biology teacher, but rather simply reviewed the students for their final exam. In Sprague de Camp’s book, The Great Monkey Trial, there is recorded a remarkable conversation between Scopes and reporter William K. Hutchinson of the International News Service which occurred during the last days of the trial; Scopes said:

There’s something I must tell you. It’s worried me. I didn’t violate the law … I never taught that evolution lesson. I skipped it. I was doing something else the day I should have taught it, and I missed the whole lesson about Darwin and never did teach it.

Those kids they put on the stand couldn’t remember what I taught them three months ago. They were coached by the lawyers.

Honest, I’ve been scared all through the trial that the kids might remember I missed the lesson. I was afraid they’d get on the stand and say I hadn’t taught it and then the whole trial would go blooey. If that happened they would run me out of town on a rail (de Camp, page 432).

When Hutchinson replied that it would make a great story, Scopes said: “My god no! Not a word of it until the Supreme Court passes my appeal. My lawyers would kill me” (de Camp, page 432).

Hutchinson did claim he overheard Clarence Darrow coaching the students on what to say, but even with coaching, only one of the students clearly implied that Scopes taught evolution. To this day, the press is keeping their little secret; Clarence Darrow, who was presumably supposed to defend his client from a law that forbid the teaching of evolution, apparently coached his client’s students to perjure themselves by claiming that John Scopes taught evolution … when in fact he hadn’t! 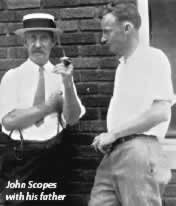 Given that John Scopes was a popular football coach in Dayton who never taught evolution and didn’t feel strongly about the subject, how then did he get indicted for violating a Tennessee law which forbid teaching the evolution of man?

The American Civil Liberties Union (ACLU) in New York City and George Rappleyea, a local mine operator in Dayton, Tennessee, were responsible for indicting John Scopes for teaching evolution. The ACLU was anxious to get a test case in Tennessee which they might be able to use to repeal or nullify the state’s Butler Act. This act forbade public school teachers in the state of Tennessee to: (1) deny the literal biblical account of man’s origin, and (2) to teach in its place the evolution of man from lower animals. The law, incidentally, didn’t forbid teaching the evolution of any other species of plant or animal.

George Rappleyea read a press release from the ACLU in a Chattanooga paper, The Daily Times, which said in part:

We are looking for a Tennessee teacher who is willing to accept our services in testing this law in the courts.

The release promised legal services without cost and implied that the Ku Klux Klan and “professional patriotic societies” were the “inspiration” for the law.

It is generally believed that Rappleyea cooperated with the ACLU in setting up their test case in Dayton in the hope that this would attract economic investment in his community. But Rappleyea apparently had reasons of his own for trying to embarrass the Bible-believing Christians of Tennessee by challenging and perhaps overthrowing a law which favored teaching the biblical account of man’s creation. During the Scopes trial, George Rappleyea told the press about his reason for setting the Scopes trial in motion. Rappleyea was apparently upset with a preacher who he claimed declared that a dead boy would be cast into the “flames of hell” because he had neither “confessed Christ” nor was baptized. This apparently did not agree with Rappleyea’s religious views, and he vowed that he would “get even” with the “fundamentalists” who he believed were responsible for the anti-evolution law. Rappleyea said, “I made up my mind I’d show the world.”

Rappleyea, who de Camp describes as an “intense, argumentative, garrulous man,” lost no time in seeking out John Scopes and in pressuring him to accept the ACLU offer. Scopes was apparently reluctant to get involved and told Rappleyea that he had not actually taught evolution. Rappleyea insisted that since the biology textbook taught evolution, that was close enough, and with Scopes’ permission, he wrote out a telegram on the spot to the ACLU which read:

Professor J.T. Scopes, teacher of science Rhea County high School, Dayton, Tenn, will be arrested and charged with teaching evolution. Consent of superintendent of education for test case to be defended by you. Wire me collect if you wish to cooperate and arrest will follow.

Apparently Rappleyea didn’t even wait for the ACLU response, as he went right out to a justice of the peace to get a warrant for Scopes’ arrest. Lawyer Sue Hicks, a local man who went along with the plan, filled out a makeshift arrest warrant, while Rappleyea swore to the truth of the statement and signed the warrant. He then found a sheriff and demanded the arrest of John Scopes.

Scopes was arrested and immediately released on a bond of $1,000.

It should be emphasized that, contrary to the film, Scopes was never jailed for teaching evolution. In portraying Scopes as a “prisoner,” the film obviously tried to invoke sympathy for Scopes as a man who was persecuted for his beliefs by prying fundamentalists.

In his book, Sprague de Camp dispelled what he called “the widespread myth” of the dedicated schoolteacher who was persecuted for his courageous stand on behalf of evolution by “witch-burning” fundamentalists by writing:

The trial wasn’t a “witch hunt” as it has been called, because the accused and his defenders—the “witches”—were actually the hunters, stalking the law with the intent of overturning it or at least making it unenforceable.