Darrow’s Statue: Another Win for Evolution?

Yesterday, July 14, 2017, a statue of Clarence Darrow was installed opposite the 2005-erected statue of William Jennings Bryan (shown immediately below) at the Dayton, Tennessee, courthouse, where the famous “Scopes Monkey Trial” took place nearly 100 years ago. In 1925, Darrow was the agnostic/atheist lawyer who defended Scopes, who allegedly broke the law by teaching that man evolved from lower animals. Scopes never taught evolution in the first place, but volunteered to claim he did so that Darrow’s anti-Christian beliefs could be heard in the courtroom and be covered nationally by newspapers.

Bryan, a great Christian orator, was greatly maligned because of his public stand on believing God’s Word. However, Bryan, like all of us who have feet of clay, didn’t understand all the issues involved regarding the Book of Genesis, just as many in the church don’t today.

Now, Darrow lost the case, because in the end of the trial, he pled guilty on behalf of Scopes. This was a deliberate ploy to ensure that Bryan didn’t get to question Darrow on the stand, as Darrow had done to Bryan (a promise Darrow reneged on)! Bryan certainly would have exposed Darrow’s utter contempt for Christianity and his blind faith in human reason, had Bryan been given the opportunity.

Darrow was victorious, though, in the sense that, while his client was found guilty, Darrow got Bryan, the prosecutor and a “spokesman” for the Bible and the creation of man, to say he believed that the Genesis account of creation could have taken millions of years. Bryan also had difficulty answering the question of where Cain got his wife. 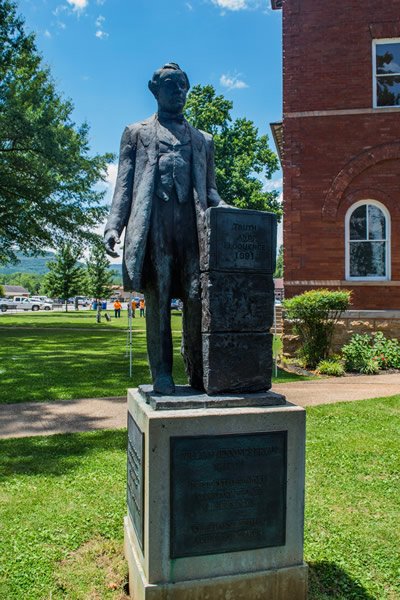 Several days ago there were reports of threats of possible protests and violence at the courthouse on Friday, but nothing happened, except for a protest banner posted on the courthouse that said, “Read your Bible.” (You can see that statue and poster in these pictures taken by an AiG supporter living near Dayton.)

Why all the excitement over this statue, and why all the upset over it?

This whole statue unveiling had me asking a few questions: Why all the excitement over this statue, and why all the upset over it? Well, I can tell you that some see this new statue as a “win” for evolution, because they consider it as another publicly accepted (and quite prominent: Darrow’s statue is ten feet tall!) symbol of the acceptance of evolution in the culture. Some people (falsely) consider it as symbolic of the downfall of biblical Christianity.

Zenos Frudakis, the Darrow sculptor, had this to say: “This is a time when we need a voice of reason more than ever. We need the voice embodied in bronze, because bronze lasts forever unlike most things.”1 Well, we know that bronze doesn’t last forever (2 Peter 3:10), but contrast this with what does, according to the Bible:

The grass withers, the flower fades, but the word of our God will stand forever. (Isaiah 40:8)

Such comments as those by Frudakis certainly show that this new statue is not just about portraying a historical event of 1925: it’s about secularists wanting to celebrate reason (i.e., worship of man) and attack anything to do with Christianity. 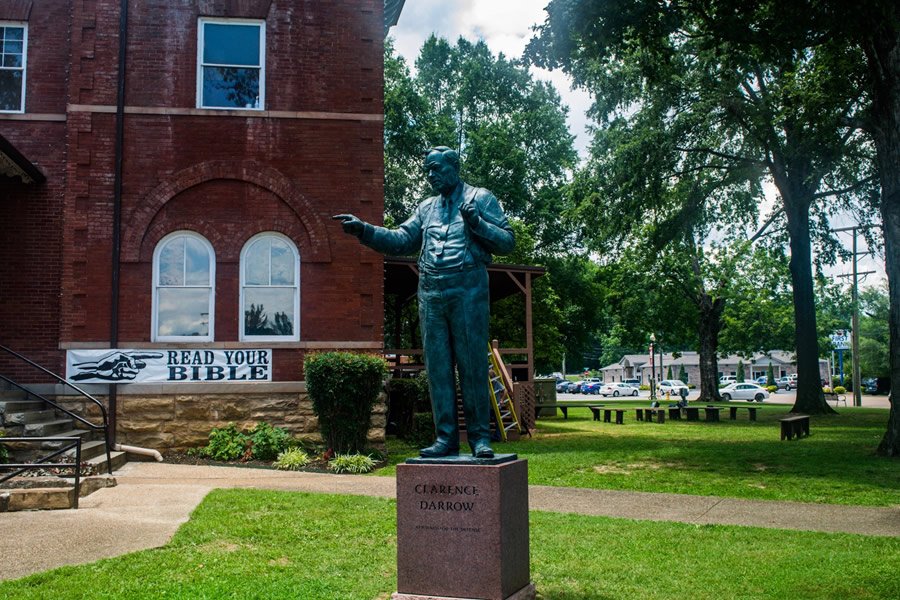 Now, some believers are understandably upset by what is clearly an “in your face” declaration of “you’re irrelevant”—or worse. In fact, an opinion piece in the USA Today newspaper yesterday was titled “Creationism Support Is at a New Low. The Reason Should Give Us Hope,”2 discussing the addition of the Darrow statue outside the Dayton courthouse. The columnist is clearly happy to report a recent Gallup poll showing that there’s been a recent drop to 38% of Americans who believe in a Creator who made humans in the past 10,000 years. The article goes on to say,

It’s endlessly frustrating to secular and religious liberals, but the creationist view has held strong sway in this country in the decades since the famous Darrow-Bryan courtroom duel. Over recent decades, percentages in the upper-40s have taken the creationist position; the figure stood at 46% in Gallup’s 2012 survey.

As is often the case when the secular media cover creation-evolution issues, they often get their facts wrong. In an Associated Press article syndicated on Friday about the new Darrow statue, the reporter wrongly stated that Tennessee law in the 1920s had "banned" the teaching of evolution, which led to a test of that law at the Scopes trial.3 The teaching of molecules-to-mammal evolution over millions of years was not banned in the state’s schools, just human evolution.

Certainly violent protests aren’t the answer to offensive statue unveilings. As far as what we as Christians need to be doing in the culture, I couldn’t say it any better than share an article we recently posted about the Scopes trial in light of its anniversary on July 10, “Why Is the Scopes Trial Significant?” This quote from that article is discussing the protests about the removal of a monument displaying the Ten Commandments several years ago:

The answer isn’t to merely protest such removals [or in this case, additions]—or to simply protest other anti-Christian actions (e.g., abortion, euthanasia, gay marriage)—but to teach people why they can believe the Bible is true in every area it touches on. We need to provide Bible-based answers to the questions the world asks about the Christian faith (Who was Cain’s wife? Isn’t the earth millions of years old? Weren’t the days in Genesis 1 long periods of time?). As we do this, people will begin to see that they can trust the Bible when it speaks of “earthly” things, and thus, when it speaks of “heavenly” things (salvation, absolute moral standards, etc.), as Jesus teaches in John 3:12.

It’s not about plaques, statues, or court cases. It’s about truth.

So who did win the Scopes trial? Well, the take-home lesson is that it’s not about "wins.” And if it were, we have nothing to worry about (Psalm 2; Romans 8:31.) After all, Bryan “won” the case: Scopes pleaded guilty (to something he did not do) and had to pay a fine (though that was later overturned on a technicality). It’s not about plaques, statues, or court cases. It’s about truth. It’s about authority. It’s about the Creator of the universe and his love for mankind, and it’s about sharing that. That’s a message of hope that the world doesn’t have, as evidenced by this loveless and bankrupt supposed victory. Find out more about the God of the Bible.

Ultimately, this statue unveiling is not about secularists having their say and promoting their heroes. It’s more than that. Secularists actually want to impose their religious views on the culture. This strategy can be seen clearly in many ways regarding their actions toward AiG. This includes their opposition to our Ark Encounter and Creation Museum. Atheists and others tried to prevent the Creation Museum from being built in Boone County and protested the opening of this privately funded facility, built on private land, because it’s a Christian attraction. They have twice held protests at the Ark. To justify their intolerance about the Ark, they made up lies about taxpayer funds supposedly being used to build the ship! The intolerance of secularists and their fake news seem to have no bounds!

This article was written with the help of AiG’s research staff.