January 22 will mark the 40th anniversary of the infamous Supreme Court decision to legalize abortion in Roe v. Wade. 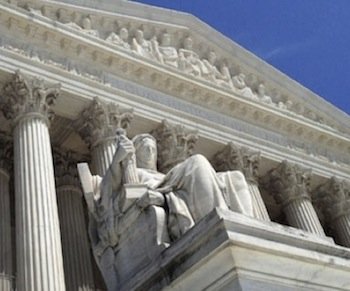 The statue in view here is called The Contemplation of Justice. Now, forty years after Roe v. Wade, is an appropriate time to contemplate the justice of declaring that a woman’s right to privacy gives her the right to kill her unborn child. Long ago, unwanted babies were left exposed to the elements to die. Civilization finally abolished that abominable practice. Yet, on January 22, 1973, in this building adorned with classical symbols of justice, the United States Supreme Court opened Pandora’s box to unleash a death sentence on millions of unborn babies. Overturning two centuries of history in which states were allowed to restrict elective abortion, the high court somehow discovered a right of privacy within the “Due Process” protection of the 14th amendment, an amendment added to the United States Constitution to protect former slaves from unjust treatment. As pointed out in yesterday’s web article (Roe v. Wade: 40 Years Later) concerning this issue, the abortion rate among black Americans is disproportionately high, triple the rate among white women. The epidemic of death among the unborn of the very people group the 14th amendment was originally intended to protect is an ironic and cruel twist to the sad history that has followed Roe v. Wade. Image courtesy of Chip Somodevilla/Getty Images through abcnews.go.com

Reviewing the four decades since the court opened the Pandora’s box of abortion on demand in the United States, Time magazine’s cover story by Kate Pickert comes to the astonishing conclusion that women have been losing their abortion rights ever since.

The Supreme Court decided that a woman’s right to privacy—supposedly violated by laws preventing abortion—trumped the unborn person’s right to live. Roe v. Wade declared unconstitutional all laws preventing first trimester abortions and only allowed restrictions in the second trimester to protect “the health of the mother.”1 Deeming mental stress to be a threat to maternal health removes all restrictions. Only beyond the point of viability were state laws restricting abortion “in the interest of promoting the potentiality of human life” still permissible. Viability is the time when the baby may survive outside the womb.

Since the 1973 decision, over 54 million unborn babies have been aborted in the United States. That’s an average of 1.2 to 1.4 million per year. These mind-boggling numbers don’t excite the same horror as historical genocidal killing fields, however, because these helpless victims remain nameless, faceless inconveniences who are for the most part invisible.

Yet according to Time, any and all restrictions on abortion are a threat to women’s rights. Citing the fact that 24 states have enacted over 90 new restrictions affecting abortion access since 2010, Pickert writes:

These laws make it harder every year to exercise a right heralded as a crowning achievement of the 20th century women’s movement. In addition to North Dakota, three other states—South Dakota, Mississippi and Arkansas—have just one surgical-abortion clinic in operation. The number of abortion providers nationwide shrank from 2,908 in 1982 to 1,793 in 2008, the latest year for which data is available. Getting an abortion in America is, in some places harder today than at any point since it became a constitutionally protected right 40 years ago this month.2

Of course, the Supreme Court did not declare that the government or anyone else was obligated to provide easy access to abortions, so it is difficult see how the lack of an abortion provider on every street corner represents a trampling of anyone’s right to an abortion. As a practicing physician, I chose to exercise my right to refuse to perform abortions. Individual physicians and health care facilities do not bear the responsibility of making sure abortions are convenient. Roe v. Wade eliminated laws criminalizing abortions; it did not mandate that the government must pay for them or that physicians must perform them. And at around 1.2 to 1.4 million a year, abortions seem to be quite accessible enough.

Just what sort of “restrictions” upset Pickert? She complains that 60% of pro-choice Americans support parental consent for minors and 24-hour waiting periods. And she worries that a whopping 79% of pro-choice Americans dare to think that abortion in the 3rd trimester—when the unborn baby is viable—should be illegal. Of course, killing a 3rd trimester baby once he or she has been admitted to the nursery is murder. And it has been considered murder ever since the civilized world outlawed “exposure” of unwanted infants. So how can anyone justify killing the same child before it exits his or her mother’s body?

Children—another name for “minors”—cannot get a prescription to treat strep throat, which can have dangerous long-term consequences, without parental consent. Yet abortion rights activists want children—who may well be pregnant because they are helpless victims of abuse and need parental protection—to be able to opt for abortion without even letting a custodial parent know. And considering that the risk of medical complications, even death, with surgical abortion exceeds the risk for taking an antibiotic, the adult responsible for her care should be “in the know” when a minor undergoes such surgery.

What other sorts of restrictions do abortion activists claim erode women’s rights? Waiting periods and counseling are required in some states. Note that the counseling does not have to be provided by right-to-life representatives. These laws simply serve to emphasize the irrevocable nature of the decision and therefore discourage a pregnant woman from making an impulsive decision she may later regret. 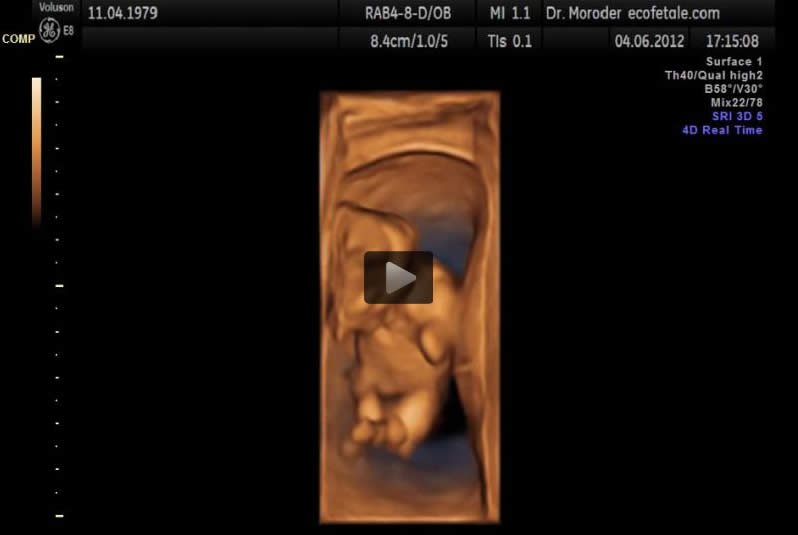 Modern technology such as 3D ultrasound has allowed us to peek into the womb, a place the psalmist refers to as a “secret” place (Psalm 139:13–16), where our Creator’s blueprint orchestrates human development. From the moment of fertilization until the day of death, usually years down the road, a human life is a continuum, but in the earliest weeks and months of life dramatic changes take place to begin preparing a person for life outside his or her ’s body. This baby shown cavorting safely in the womb at about 12 weeks already has all the organs formed and primarily needs to spend some months growing. Americans can no longer legally place unwanted babies outside to die as our uncivilized forefathers did many centuries ago. Instead, however, we can legally rip them from this safe and secret place. Babies like this are aborted every day. This video, featured on Wikimedia as one of the “finest and most valued images,” is made available courtesy of Dr. Wolfgang Moroder through Wikimedia Commons.

Other laws to which abortion activists object are regulatory measures that affect other medical providers, such as requirements that abortion clinics be held to the same stringent standards as other outpatient surgery centers. Furthermore, activists complain that over half the states do not provide Medicaid coverage for elective abortions. In 1976, the Hyde Amendment marked perhaps the official beginning of the pro-life movement, legislating the fact that, except in certain cases, federal funds are not routinely available to pay for abortions. Roe v. Wade, after all, never promised the government should pay for the abortions.

This is Pickert’s unimpressive description of how abortion rights are evaporating.

Unless there is a fundamental shift in acceptance of the sanctity of human life on a biblical basis, we cannot hope to see an end to the legalized murder of over a million of America’s unborn each year. But as Al Mohler points out in this discussion of the Time piece, even a young child seeing an ultrasound of a yet-to-be-born sibling on the refrigerator can understand that the unborn is a person. If only America’s president, lawmakers, and justices could grasp as much. The problem of course is not an intellectual failure on their part, but rather their willful blindness and failure to take a morally responsible stand.