Abortion Bills—Should They Have Exceptions? 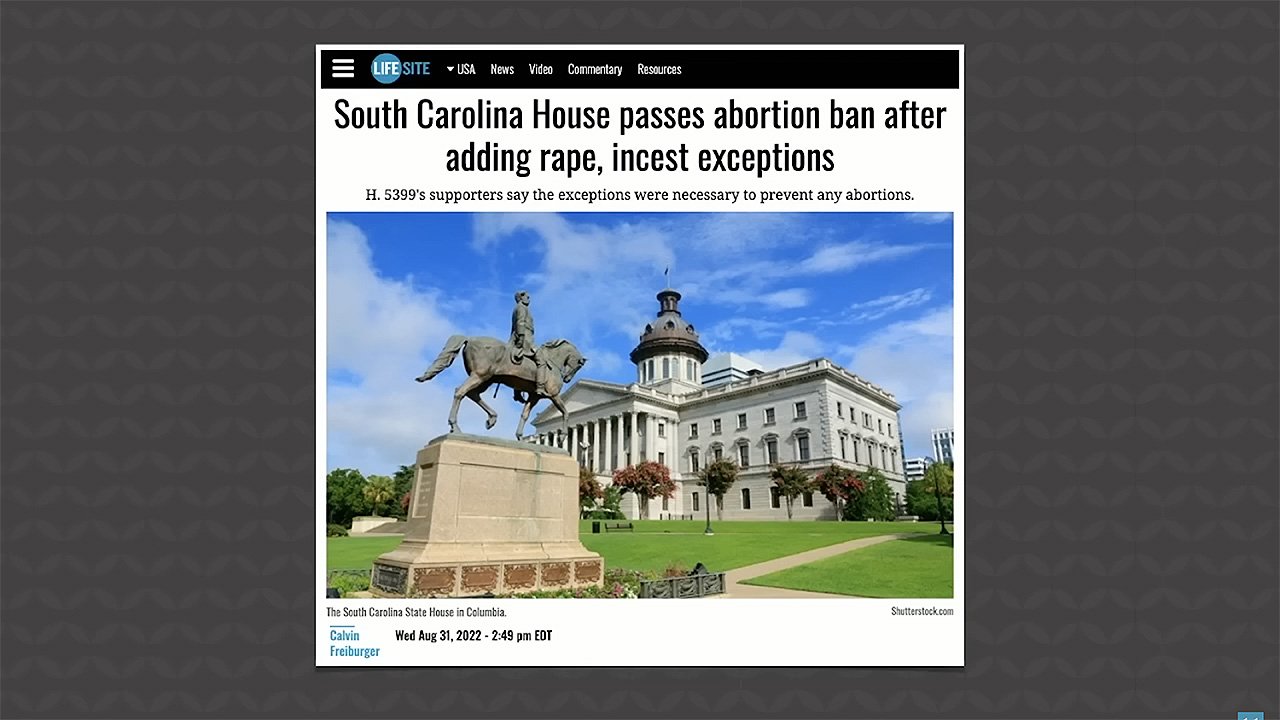 Recently a bill passed the South Carolina House which bans elective abortions in that state. This same bill nearly passed earlier, but after falling short by eight votes, the bill was “amended to allow abortions up to 12 weeks if a woman tells a doctor she was raped, after which the doctor has 24 hours to report her claim to law enforcement.”

These kinds of exceptions are often included in such bills, sometimes just to get them to pass (after all, more lives will be saved with this bill, even with the exceptions, than without the bill). But what does an exception for rape or incest imply about the value of life?

Circumstances don’t determine the value of life! God has already determined life’s value, and he says it’s of immeasurable worth.

It implies that the circumstances surrounding conception determine the value of a human life. Banning abortion in nearly every case yet allowing it as a “solution” to the gut-wrenching, tragic case of sexual assault says that a child conceived in violence and against the will of the mother somehow doesn’t have the same value as a child conceived in a loving marriage, by unwed teenagers, or during a “one night stand” (or any other circumstance). But circumstances don’t determine the value of life! God has already determined life’s value, and he says it’s of immeasurable worth. Abortion is wrong in all of the scenarios described above because it takes an innocent life. Human life, made in the image of God, exists right from fertilization.

Are these kinds of circumstances difficult, complicated, and heartbreaking? Absolutely—sin always is! But the violence of abortion is not the answer to the violence of sexual assault. Rape and incest are horrific crimes, but handing down the death penalty (abortion) to the unborn child is not the answer. It just creates a second victim, this time of a child made in God’s image, innocent of the crimes of his or her father.

Now, I understand that these clauses are often added to pro-life bills just to get them to pass so lives can be saved. But sadly, there are many who consider themselves pro-life who think that such clauses are necessary for victims. But abortion doesn’t remove the consequences and trauma of sexual assault. It just adds to it. If we want to be truly pro-life—pro-woman and pro-baby—we must be against abortion, including in the horrific case of rape or incest.

I’m sure this view will evoke an emotional reaction in some. But please think carefully about this issue, as outlined above and in the article linked below.

You can learn more about how we should view abortion in the case of rape and incest in AiG’s Avery Foley’s article “Answering Pro-Abortion Arguments: What About Assault or Abuse?”

This item was discussed Monday on Answers News with cohosts Tim Chaffey, Rob Webb, and Roger Patterson. Answers News is our weekly news program filmed live before a studio audience and broadcast on my Facebook page and the Answers in Genesis Facebook page. We also covered the following topics:

Watch the entire episode of Answers News for September 19, 2022.