Should Abortion Providers Be Required to Save Infants?

But what if she’s not dead?—Should abortion providers be required to save the lives of infants they fail to kill?

No one keeps score on the number of babies inadvertently born alive during or after attempted abortion. But it does happen. Some of these rare survivors have become outspoken antiabortion activists. But a baby born alive as a result of an induced abortion is clearly a “failure” for those who engineered his or her death. Being premature and possibly traumatized, such a baby needs medical care. What’s an abortionist to do? Finish the murder already in progress (as Pennsylvania doctor Kermit Gosnell is currently charged with doing), neglect the baby to death, or try to save the child?

The truth about this issue was captured on video during a recent Florida legislative committee meeting. Repeatedly asked by increasingly astonished legislators what Planned Parenthood doctors would do if a failed abortion left a child “struggling for life” in their hands, Planned Parenthood’s representative testified that the “decision should be between the patient and the health care provider.”

The committee was considering House Bill 1129, Florida’s Infants Born Alive Act.1 In addition to echoing the federal Born-Alive Infants Protection Act of 2002 by declaring any baby born alive after an induced abortion is a “person,” Florida’s proposed law goes so far as to “require health care practitioners to preserve the life and health of such an infant born alive, if possible; providing for the transport and admittance of an infant born alive to a hospital.”2 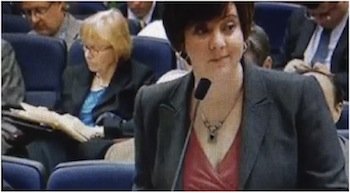 Planned Parenthood representative testifying before a Florida legislative committee repeatedly asserted that the life-and-death decision about what to do when an aborted baby is born alive should be left up to those who have a vested interest in the child’s death. Image: YouTube screenshot through www.theblaze.com

The federal law specifies that any Homo sapiens “born alive” with any of the usual signs of life—a heartbeat, breathing, or voluntary movement—at any stage of development, so long as he or she has been completely expelled or extracted from the mother’s body, is a “person.” The federal law’s purpose is “to protect infants who are born alive,” but it does not mention what obligations those responsible for such a live-born person might have.3

The Florida law would obligate an abortionist to shift gears and attempt to sustain and protect the little person that moments before was marked for death. Clearly, the Planned Parenthood representative testifying before the committee does not believe the federal Born-Alive Infants Protection Act makes any demands applicable to Florida abortion clinics.

HB 1129 did, thankfully, pass the committee (10 to 2) with bipartisan support.4 The law, if eventually passed, may be difficult to enforce behind the closed doors of abortion clinics. However, it may save a few babies like abortion survivor Gianna Jessen. Jessen, who survived a late-term saline abortion and has cerebral palsy as a result of the ordeal, attended the presidential signing of the federal Born-Alive Act in 2002. Jessen personalizes the abortion debate. She says, “It’s more comfortable for people to think of abortion as a political decision, or a right. But I am not a right. I am a human being. . . . If abortion is about women’s rights, then where are mine?”

The YouTube video of the Planned Parenthood representative’s disavowal of any obligation to help a living, struggling baby is shocking many, and rightly so. But logically, if a baby moments before emerging into the world is legally marked for death, what is the difference once the child is born?

We modern civilized people recoil at the thought of ancient people leaving unwanted babies out in the cold for animals to devour, especially if the babies were unwanted because they were female. Today, what Pennsylvania abortionist Kermit Gosnell is standing trial for—cutting the spinal cords of seven infants born alive as if they were laboratory frogs to be pithed—is called homicide once a child exits the mother’s body. But the same baby can be burned with hypertonic saline or ripped violently from the mother’s body with the blessing of the law.

Last year the Journal of Medical Ethicslogically defended infanticide as a natural extension of abortion.

Last year the Journal of Medical Ethics5 logically defended infanticide as a natural extension of abortion. Professional ethicists Albert Giubilini and Francesca Minerva wrote, “What we call ‘after-birth abortion’ (killing a newborn) should be permissible in all the cases where abortion is, including cases where the newborn is not disabled.” Why? Because, in their view, “Newborn babies are not ‘actual persons’ and do not have a ‘moral right to life.’”

Our federal law declares that a baby legally becomes a person immediately upon leaving the mother’s body. Florida sponsors of HB1129 want to protect that person. And Planned Parenthood wants no part of it. Planned Parenthood officials complain that the proposed legislation safeguarding such a child’s life implies “doctors and women who end a pregnancy can’t be trusted.”6 But the testimony from their representative—repeatedly demanding the decision be left to the mother and doctor—does make one wonder, “Trusted? Trusted to do what?” Particularly when we realize that infanticide really is a logical extension of abortion.

The distinction between abortion and infanticide is completely arbitrary. The unborn baby is just as human before birth as after. (In fact, that baby has been a human since the moment of fertilization.) But getting pro-choice Americans and legislators and judges to see that we have become a destructive culture of death will require more than disgust at the thought of infanticide. It will ultimately require that we as a nation stop viewing unwanted babies as unwanted animals. After all, the evolutionary worldview declares that humans are nothing but advanced animals. Instead we must begin to see the unborn as human beings created in the image of God.

Be sure to watch the video and read more about the issue of infants born alive in abortion clinics and the culture of death that increasingly reigns in our supposedly civilized societies in America and around the world at But What If She’s Not Dead?

Previous Article Thoughts on the Finale Next Article How Do Leafhopper Legs Survive the Launch?