Thoughts on the Finale

“For He made Him who knew no sin to be sin for us, that we might become the righteousness of God in Him” (2 Corinthians 5:21).

Reviews of The Bible

The Bible mini-series on the History Channel concluded last Sunday evening with “The Passion,” the final installment covering Jesus Christ’s trial before Pilate, His Crucifixion and Resurrection, and the initial spread of the gospel message to the world. The scriptwriters did a reasonable job of revealing the motivations of people like Pontius Pilate and Caiaphas as they condemned Jesus, though they omitted Herod’s part in the historical charade that passed as a trial. As in previous episodes, there were omissions, additions, and alterations to familiar biblical narratives—disturbing to some viewers while acceptable adaptations to others—and the Religion News article “Did The Bible finale stick to the story” by Jonathan Merritt (linked above) accurately points out a number of these. 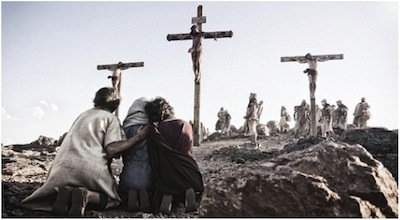 The Crucifixion and the subsequent Resurrection of Jesus Christ, which along with His future return are the three most important historical events since the Creation of man, were the focal points of the finale of the History Channel miniseries The Bible. Image: final episode of The Bible courtesy of the History Channel through jonathanmerritt.religionnews.com

By juxtaposing Peter and Judas—who each rejected Jesus—the movie presents the important contrast between sinners (like Peter) who accept the forgiving grace of God through Christ and sinners who (like Judas) may regret what they’ve done but, hardening their hearts, fail to seek God’s forgiveness. Similarly, the malefactors crucified with Jesus illustrate this contrast, and as Scripture records (Luke 23:39–43), Jesus assured the repentant one that he would be with Him in Paradise.

As we discuss the series with friends, these twin concepts of repentance and dependence on God’s grace are vital, for we are all sinners in need of God’s mercy (Romans 3:23; Romans 6:23). God is not just a God of “second chances” (something said in a previous episode), for then our salvation would depend on our own works (Ephesians 2:8–9). God instead offers forgiving, transforming grace to repentant sinners who trust that Jesus Christ paid the price for our sins by His death on the Cross.

Christ’s scourging and crucifixion was presented in a somewhat more family-friendly way than in the R-rated movie The Passion, though it still merited the PG-13 caution suggested by the producers. Crucifixion was, after all, a brutal tortuous method of execution so perfected by the Romans that they didn’t even use it on their own citizens. Regardless of the level of gory detail a movie includes, when we discuss Christ’s Crucifixion with others, it is vital that they understand the uniqueness of His Crucifixion was not in the physical way it was carried out but in the fact that—as the completely innocent Son of God—Jesus Christ willingly (John 10:18; Philippians 2:5–11) took upon Himself our sin-guilt (2 Corinthians 5:21) and was therefore, while on the cross, forsaken by God the Father (Matthew 27:46; Mark 15:34).

We hear in the series much of what Christ said from the Cross, see some events associated with His death, and are reminded that Jesus truly died.

We hear in the series much of what Christ said from the Cross, see some events associated with His death, and are reminded that Jesus truly died (1 Corinthians 15:3). Unfortunately, the only real connection explaining that Jesus Christ was taking upon Himself the guilt for the sins of all mankind (Galatians 1:4; Hebrews 2:9; 1 John 2:2) was the fact that the Passover lamb was slaughtered during His Crucifixion. This visually represented 1 Corinthians 5:7—“Christ, our Passover, was sacrificed for us”—but only for biblically literate viewers. This point is worth discussing with children and friends who may not understand the significance of Christ’s death as anything other than the execution of an innocent man.

The “many infallible proofs” (Acts 1:3; 1 Corinthians 15:1–8) that Jesus really rose from the dead didn’t get much screen time. The scriptwriters substantially adapted those they did cover. Though it was clear in the movie that Christ’s followers knew He truly died and was alive again, I cringed when one attested “He did not die; He is still with us.” This was a very poorly written line. “He did not die” does not mean the same thing as “He died and then came back to life”! After all, Romans 1:4 declares that Christ Resurrection from the dead attests to His deity. Scripture (Romans 4:24–25; Romans 10:9) indicates Christ’s Resurrection from death is necessary for our salvation. In preparing to discuss this pivotal issue with others, you may want to review what the Scriptures record about the significance of Jesus Christ’s Resurrection as well as the “many infallible proofs” witnessed between His Resurrection (shortly after Passover) and His ascension into heaven (ten days before the feast of Pentecost) at Did the Resurrection Really Happen?, The Sequence of Christ’s Post-Resurrection Appearances, and at The Resurrection of Jesus Christ.

The series depicts Paul’s persecution of Christians and his conversion as well as the beginning of the spread of the Gospel through the Gentile world. It also provides an abbreviated version of the Acts chapter 10 account of the salvation of Cornelius, taking us with Peter to the home of the Roman centurion who wished to know how to be saved. Finally, the mini-series was able to explain something of what the actor portraying Jesus meant when he told Peter, “We’re going to change the world.” (That isolated scene has appeared in countless advertisements, previews, and recaps for weeks, and many of our readers have expressed concern about just what sort of “world-changing Jesus” the miniseries was going to present.) When Peter told the Roman Cornelius how to be saved, Peter said, “I am only a man like you. It is Jesus that can save you. . . . Everyone who believes in Jesus receives forgiveness.”

So, given that over 100 million people tuned in to the series, chances are some of your unsaved friends did too. Now it’s time for you to take the seed that’s been planted and do your part, praying that God through His Holy Spirit will open doors of opportunity (Colossians 4:3) for fruitful discussion and enable you to use the Scriptures themselves to build a clear foundation for faith in Jesus Christ (1 Corinthians 3:6–11).