Jesus—come from God the Father with authority to deal with sin—is perceived as a threat by the Jewish and Roman leaders.

Reviews of The Bible

The Bible miniseries aired its fourth of five episodes on the History Channel last Sunday, covering Christ’s ministry from Galilee to Gethsemane and His trials before the Jewish Sanhedrin. Appropriately, His triumphal entry into Jerusalem riding on a donkey in fulfillment of Zechariah’s messianic prophecy (Matthew 21:5) was part of this Palm Sunday presentation. 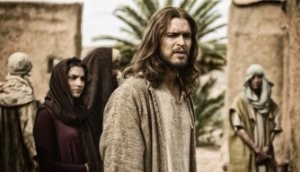 Actor Diogo Morgado, playing the role of “Jesus” in the History Channel adaptation The Bible, announces that God is willing to forgive repentant sinners in the retelling of the parable of Luke 18:10–14 and that Jesus Christ—the Son of Man—has authority to forgive sin (Mark 2:9–11).

This episode hit some high points of Christ’s earthly ministry and despite some “cinematic adaptations” follows Scripture pretty well. John 20:30–31 tells us that the miracles Jesus performed were not only acts of compassion but also proof that He was the Son of God, the source of eternal life. Jesus’s miracles were intended to get people to listen to Him and to believe in Him. The Bible film’s selection of scenes from Christ’s ministry—and the way they were portrayed—connected Christ’s divine power over sin as well as His authority over worship to His miracles. Thus, the film did not make the mistake of presenting Jesus as a magician.

For instance, in the opening scene, Jesus heals the paralyzed man lowered through the roof to Him in a crowded house, as described in Mark 2:1–12 . Jesus first forgives the man’s sins—to the consternation of the onlooking Jewish officials who correctly declare that only God can forgive sin. Scripture records that Jesus then asked the following:

The script follows the Scriptures here, and the meaning is clear. Thus, from the opening scene, the purport of the miracle-ministry of Jesus is explained through Scriptural dialogue and action.

The opening narration states that Jesus came to “offer a new way” in contrast to the pharisaical “strict observance of the law.” And while this could be misconstrued to suggest Jesus downplayed the sinfulness of sin, placement of the forgiveness and healing of the paralytic immediately after this narration shows the scriptwriters were not trying to give us a false Jesus who ignores sin.

Likewise, the John 8:3–11 incident with the adulterous woman presents Christ’s challenging accusation of sinfulness to her accusers and His ultimate admonition to her to “go and sin no more.” And in another powerful scene, Jesus tells the Luke 18:10–14 parable of the tax collector and the Pharisee who went to the temple to pray in clear earshot not only of a Pharisee, who is arrogantly condemning Matthew the tax collector, but also of Matthew himself. Convicted of his sin, his need for God’s mercy, and the promise that God would respond to his repentant prayer—Matthew responds. Scenes like this should help viewers see that Jesus came to seek and to save the lost ( Luke 19:10). So while one of the earlier episodes seemed “soft on sin,” this one—though it lacks any of Christ’s preaching about hell—does not ignore man’s sin problem or suggest a false Jesus that considered sin unimportant.

Scripture records that many people misunderstood Jesus’s miracles. The film depicts this in the miraculous feeding of the 5,000 with five loaves and two fishes. Afterward the people sought to make Him king by force, and Jesus slipped away from them, as Scripture records (John 6:1–15). The Jewish leadership and Rome also saw His miracles and the consequent devotion of the crowds as a threat. The film shows the resulting collusion among the Jewish leadership to arrest and condemn Jesus in order to preserve their own position and the Jewish way of life.

When Nicodemus, himself a Pharisee who has learned from Jesus that he cannot enter the kingdom of God unless he is born again (John 3:1–21), asks “what if He really is the Messiah?” and when Judas indicates his dissatisfaction with Jesus, the Jewish leaders maintain that no genuine Messiah from God would disturb the temple activities but would instead unite the nation. This reflects the historical and biblical truth that the Jews had largely come to misunderstand Old Testament prophecy and to expect a political Messiah, not realizing their greatest need was to be saved from sin. They erred, thinking their ritual was sufficient for salvation (Hebrews 10:1–20). They did not understand that the sacrifices and the temple services were, as chapters 8–10 in the book of Hebrews make clear, only symbols of the sacrifice to be made by the true Lamb of God for sin (1 Corinthians 5:21; 1 Peter 1:18–21; Hebrews 9:24, 28).

The depictions of Jesus and the disciples were refreshing, prompting even one critical writer to note the following:

Portugese actor, Diogo Morgado, who plays the role of “Jesus,” gives us a character that is much more balanced than some other Jesus characters I have viewed in past programs [other movies]. Unlike some of them, Morgado’s character is capable of something other than a syrupy, pasted on, smile and bubbliness permeating every scene. Morgado’s character actually shows some anger at times, and in particular in the scene where Jesus tosses over a couple of the money changer’s tables and scolds them for turning the temple into a “den of thieves.” This “Jesus” flexes a little muscle.

It was also refreshing to see the disciples of Jesus portraying their characters as real, living and breathing, persons and not a group of happy-clappy cultists dancing around and handing out loving glances at all the “sinners” as if they were followers of Hare Krishna distributing love and flowers at an airport.1

There are some gaps. When Jesus declares Himself to be “the way, the truth, and the life” (John 14:6), He doesn’t include, “No one comes to the Father except through Me.” Also, at the Last Supper in the film, Jesus does give His disciples the bread and the cup, saying, “This is my body,” and “This is my blood,” and He commands them to repeat these actions in remembrance of Him. However, the dialogue leaves out the reason His blood was about to be shed: “This is My blood of the new covenant, which is shed for many for the remission of sins” (Matthew 26:26–28, emphasis added). Thus the fact that Jesus Christ’s shed blood provides the only way (Acts 4:12; 1 Timothy 4:6) to satisfy justice, atone for sin, and reconcile us to God (Romans 5:8–12; 2 Corinthians 5:18) may not be clear to some viewers.

As we’ve said before in previous reviews, this miniseries is an adaptation, not a strict presentation of Scripture. Hopefully, the high quality and the high publicity will draw many to read the Bible for themselves and to be ready to discuss Christ with Christians. We should pray that “God would open to us a door for the word” (Colossians 4:3) using the film, be thankful the film presented a Christ who came from God the Father to deal with sin, and be prepared to clarify from the Bible exactly how He did it.