Did you know that over 270 cultures around the globe still have distant memories of Noah’s Flood?

People all over the world have heard of Noah’s Ark and the Flood.

Now, the details of these legends have been lost. But most of them share common themes: man became corrupt; the Flood was worldwide; eight people survived; representatives of all land animals were saved; a dove was released to seek dry land; the survivors came down from a mountain to re-populate the whole world, and so on.

When I attended university, I remember my professor telling our class that the Bible’s account had borrowed from earlier myths. In personal study, I eventually discovered it was actually the other way around.

The Bible offers the only true account of the Flood. Thus the reason the flood myths use names and elements similar to the Bible’s is because they borrowed from God’s Word. That’s why Noah-like names such as Nu-u, Nu-Wah, Noh, Nos, and Nuh are preserved in so many of the Flood legends.

Noah’s Ark continues to capture the imagination of the general public, and this interest spans all social, religious, and economic segments. The Ark and the Flood is one of the few historical events which are well known in the worldwide global circle.

People all over the world have heard of Noah’s Ark and the Flood. They remain fascinated by this event.

In 2009, we commissioned a study by the highly respected America’s Research Group (ARG), headed by renowned researcher Britt Beemer, to conduct a general population survey to find out how many people (Christians and non-Christians) would visit a full-scale Noah’s Ark if such a massive ship were built. Beemer’s research found that between 1.2–2 million people per year would visit such an Ark.

A few weeks ago, AiG made the announcement that the funds were in place to begin construction of phase one of the Ark Encounter—a full-size Noah’s Ark with exhibits.

A few days ago, Hollywood released its film version of Noah’s Ark and Flood, called Noah, starring actor Russell Crowe. Now, what are the differences between how Hollywood has portrayed the account of the Ark and Flood in Genesis chapters 6–9, and how AiG and the Ark Encounter view it?

Hollywood’s Noah: Some elements are similar to the account in Genesis, but Hollywood’s version is like the other flood legends: a twisting of the original account.

Ark Encounter’s Noah: We will present the account of Noah, the Ark, and the Flood as accurately as can be done, accepting the account in Genesis 6–9 as historical.

Hollywood: Life began on earth as a result of evolution, says the film.

Ark Encounter: Life came through the Creator God of the Bible

Hollywood: Noah is an angry man who is not really interested in saving humans.

Ark Encounter: Noah is a preacher of righteousness, who carried out what God called him to do with reverence. He warned people of the coming judgment because of their wickedness: “By faith Noah, being divinely warned of things not yet seen, moved with godly fear, prepared an ark for the saving of his household, by which he condemned the world and became heir of the righteousness which is according to faith” (Hebrews 11:7).

Also, God “did not spare the ancient world, but saved Noah, one of eight people, a preacher of righteousness, bringing in the flood on the world of the ungodly” (2 Peter 2:5.

Ark Encounter: Noah’s Ark will be shown as a vessel that saved representatives of the land animal kinds and humans; God judged the earth because of man’s wickedness.

Hollywood: Noah’s Ark was really a message about environmentalism—that animals were more important to be saved than humans.

Ark Encounter: Noah’s Ark will be shown as a picture of salvation. As Noah and his family had to go through the door of the Ark to be saved, so we today likewise need to go through a door to be saved: “I am the door.” Jesus said. “If anyone enters by Me, he will be saved” (John 10:9.

Hollywood: The Ark is unrealistically crammed with all sorts of different species, including multiples within the same kind.

Ark Encounter: We will teach that God sent two of each KIND (in most instances, “kind” means “family” in classification) of land-dwelling, air-breathing animals.1 There was plenty of room on the Ark for the estimated 1,000 land animal kinds, as our careful scientific research has revealed.

Hollywood: Producers spent $150 million to make and then promote a fictional movie for the purposes of entertainment. 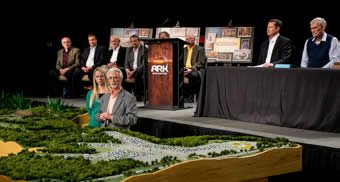 A February 27 online press conference announced the funding of the evangelistic Ark Encounter that would be faithful to the Scriptures. A scale model of the Ark Encounter attraction was also unveiled.

Ark Encounter: We will spending $73 million to build a huge Ark with high-tech exhibits with the purpose of affirming the Bible and reaching millions of souls with the gospel of Christ.2

Now, which kind of Ark would you rather support: the fictional movie that is nothing but a grossly distorted perversion of the original, or the accurate account that is based on the history presented in Genesis?

You can read AiG’s detailed movie review of Noah and other related articles at TheTruthAboutNoah.com.

Meanwhile, the Creation Museum has many first-class Ark/Flood exhibits for you to visit. This year, children 12 and under are free (with at least one paying adult).