Days of Decline in the Church

The Genesis compromise has been highly destructive to the church in regard to biblical authority. 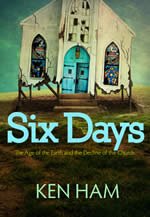 I’m sure that when many Christian leaders see the title of my new book, Six Days—The Age of the Earth and the Decline of the Church, they will shake their heads in disapproval. But I feel so strongly about the historicity of the teaching of God’s Word on the six days of creation that I believed it just had to be written.

This new book tackles a major problem that has plagued the church from the 1800s to our modern era: compromise with the book of Genesis and the six days of creation. The Genesis compromise has been highly destructive to the church in regard to biblical authority. It has greatly contributed to the decline of the church in America, including the exodus of so many young people from the church.

I contend that many of our shepherds (our Christian leaders) have led their sheep (God’s people) astray by allowing compromise with Genesis that is undermining biblical authority. The compromise reveals that so many Christian scholars are exalting man’s fallible word (e.g., secular science) above God’s infallible Word.

Here is an excerpt from chapter two of Six Days—The Age of the Earth and the Decline of the Church:

For if the trumpet makes an uncertain sound, who will prepare for battle? (1 Corinthians 14:8)

Readers, many in the church are making an uncertain sound concerning Genesis 1–11, which could very well lead to an uncertain sound about Scripture as a whole. If believers are willing to deny God’s clear Word in Genesis, why should they believe God’s Word concerning the miracle of the Resurrection or the Virgin Birth?

The mixture of millions of years and evolution with Scripture stems from secular ideas and philosophies. If we were to ask an evolutionist what he believes about the origin of the universe, he would likely tell us that there was a big bang 14 billion years ago, that 4.5 billion years ago there was a hot molten blob that formed into the earth, and that the solar system then formed. He would tell you that billions of years ago life formed in the oceans and then as life came out on land, one kind of animal changed into another, resulting in the many species we see today.

He might even show you an evolutionary tree, and tell you that ape-like creatures eventually became human, that writing was invented in the course of human evolution, and that man learned to grunt before he learned to speak.

All of this is considered dogmatic, evolutionary fact—and that is how an evolutionist would treat it in his explanation. And think about it: the public school science texts and most of the teachers, the university textbooks and professors, many secular television programs and evolutionary scientists all give the same basic message concerning origins. They are unified. They give their “certain sound.”

But if we were to ask the average Christian leader or pastor, or the average Christian academic or Christian college professor in America, or even just the average Christian, what they believe when it comes to the origin of the universe, they are not unified—they do not give a “certain sound.” Church leaders, church academics, and the average churchgoing person will give a variety of positions on Genesis—theistic evolution, progressive creation, gap theory, day-age theory, cosmic temple view, and many others.

Some will say they do not believe in a literal Adam or Eve or a literal Fall, or that Noah’s Flood was just local, and so on. Others will give all sorts of combinations of ideas. And the reason there are so many different views is because these people are trying to fit man’s ideas about origins into the Bible. And every one of these compromise positions tries in some way to fit in the supposed millions of years.

The reason there can be so many different views of Genesis to fit in the supposed millions of years is because none of them work! The only view that makes sense is what Genesis clearly states.

There is an uncertain sound that permeates through much of the Church. It is the secularists who are saying, “We know what we believe.” The Christians are saying, “Well, we don’t know, but we’ll accept what you believe and try to fit it in the Bible somehow.” That is what is happening, and we wonder why we have a problem.

Six Days—The Age of the Earth and the Decline of the Church is meant to challenge the church in this era of a decline of Christianity in the Western world. I hope God will bless it to help bring reformation to an American church that by and large is now lukewarm and ineffective.