Photo from the Creation Museum

Was the Fall of Man a Good Thing?

Was the Fall of man a good thing?

The literal serpent in the Garden of Eden, used by Satan in his temptation of Eve, is the focus of a Huffington Post columnist’s musings. He ironically plays with the historical truth of the Genesis narratives while declaring its importance to humanity. We obviously take issue with his compromise on the historical nature of God’s eyewitness account of these events as recorded by Moses. And we at Answers in Genesis obviously agree with the author's statement that the book of Genesis is “important.” But throughout this discussion is an even more disturbing notion: a seeming celebration of the Fall of man. 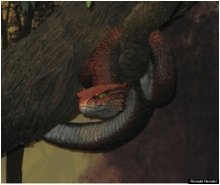 The Creation Museum’s own depiction of the serpent in the Garden of Eden is featured in Hebraist Ronald Hendel’s article asking whether the tempting serpent was really Satan or even really real. This serpent appears in the Creation Museum walk-through depicting the historical events described in the early chapter of Genesis. Image source: Ronald Hendel, www.huffingtonpost.com

As to the identity of Satan and the role of serpents throughout Scripture, while Genesis 3:1–6 does not specifically name Satan as the tempter, other Scriptures illuminate this passage. Satan is called a serpent three times in Revelation 12:9, 12:15, and 20:2. This “serpent of old,” a terrible deceiver, is clearly identified as the tempter of Eve in 2 Corinthians 11:3, which says “the serpent beguiled Eve.” Furthermore, in Genesis 3:14–15, God cursed the serpent—a judgment on the animal forever as a visible living metaphor of a terrible reality—as He also foretold the coming of the Messiah. The Messiah did not come to save people from snakebites but to bear the guilt of our sin on the Cross. Jesus Christ, after bearing all the wrath of Satan, would ultimately “destroy the works of the devil” (1 John 3:8). Thus this real historical animal was utilized by a real supernatural and evil Satan to tempt Eve to disobey God. Such is the testimony of Scripture.

The writer of the column acknowledges the importance of Genesis, saying the association of the serpent with Satan in Judeo-Christian culture demonstrates “how thinking about Genesis has long been a central activity.” However, his use of words like “story,” “early interpreters,” “in the early years,” “religious picture,” “portrait,” “happy ending,” and “scenario,” support his presumption that Genesis is not truly historical, ignoring the fact that Jesus Christ spoke of the events in Genesis as historical.

While the world should interpret its origins—physically and spiritually—through Genesis, compromisers who paint Genesis as myth, reinterpreting it in accord with man’s fallible ideas, denigrate and destroy its foundational place in the Christian faith.

The writer goes on to say, “The world is interpreted through Genesis, and Genesis is seen through the conceptual and moral framework of the world.” While the world should interpret its origins—physically and spiritually—through Genesis, compromisers who paint Genesis as myth, reinterpreting it in accord with man’s fallible ideas, denigrate and destroy its foundational place in the Christian faith.

Perhaps even worse than the columnist’s compromised stand on the history of Genesis, however, is his assertion that the Fall into sin was in any way a good thing. He writes:

The snake tricked the humans into disobedience, but he wasn't lying about the benefit. Although humans are condemned to hard labor—on the soil and in childbirth—we have the benefit of knowledge, which somehow makes us "like gods." We're both better off and worse off because Eve heeded the snake. Life as we know it is complicated, colored by pain, mortality, knowledge and joy.

Throughout the piece, the columnist minimizes the horror of the worst day in the history of mankind. He says the crime (eating the fruit) was “ambiguous.” Why? Because Adam and Eve, with their new and “impressive” knowledge of good and evil, did become “like gods.” He trivializes the high cost of rebellion, mentioning pain in childbirth and toiling in the field (Genesis 3:16–19), but overlooking the death, suffering, and cruelty in this world caused by that “ambiguous” act. He appears to think those “inconveniences” to be an almost even exchange for humanity’s new “godlike abilities.” To suggest that we are in any way better off as a result of man’s sin suggests a rather barbaric balance in which the achievements of humanity are ranked of sufficient worth to offset the billions that have suffered the wages of sin in this world and the next. His suggestion that we’re better off with our sin ignores the awfulness of sin from the perspective of a holy God who loved us enough to sacrifice His Son to redeem us. It also ignores the awful eternal consequences of sin for those who reject the Savior.

The idea of the “Fortunate Fall” is not new. It originated with the Augustinian idea that “God judged it better to bring good out of evil, than to allow no evil to exist.”1 The idea was carried further by philosopher Arthur Lovejoy in a 1937 essay, “Milton and the Paradox of the Fortunate Fall.”2 Lovejoy argued that Adam’s sin was a cause for celebration as it allowed the opportunity for God to demonstrate His goodness and grace. Taken to its logical conclusion, however, this notion would make God a hypocrite and the author of sin, concepts that are foreign to the character of God as depicted in both the Bible (Romans 6:1) and Milton’s Paradise Lost.

Furthermore, the columnist’s suggestion implies that Jesus Christ, in whom is vested all wisdom and knowledge (Colossians 2:3), would be incapable of providing humanity with sufficient intellectual stimulation in the absence of sin. C. S. Lewis devoted much of his science fiction classic Perelandra to this theme. Lewis wrote of a fictionalized world in which his non-human created beings did not succumb to temptation and subsequently became progressive brilliant stewards of their own world. They remained devoted to their Creator. And they even had a better, more mature knowledge of good and evil than those who had rebelled against their Creator.

Adam and Eve in the pre-Fall world were not unemployed; they were the stewards and rulers of their world (Genesis 1:28). A world, actually a universe, of wonder awaited their study.. They and their descendants—with lives unlimited, bodies and brains perfect, and motives pure—could have explored aspects of science our brightest have not even considered. The more they learned about the intricacies of God’s creation, the more they would have glorified their Creator. Knowledge was not evil. Only the experiential acquisition of the knowledge of what it was like to rebel against God was evil. Knowledge about God's creation was not a problem.

Adam’s rebellion “freed” humanity to see just how badly we could ruin everything in an effort to exalt ourselves above God. Adam’s rebellion “freed” us to become slaves to sin (John 8:34, Romans 6:6). Satan, in Paradise Lost, said, “Better to reign in Hell, than serve in Heaven.” 3 The suggestion that we’re better off with our sin is at best an expression ignoring sin’s consequences and at worst an agreement with the Deceiver’s sentiments.

The focus of this commentary in HuffPost was man’s perspective, and, thus, faulty conclusions were drawn. The fact that God gave His Son to redeem mankind does demonstrate humanity’s importance to God. But, lest we forget, God’s eternal purposes focus on glorification of Jesus Christ,not the exaltation or entertainment of humanity.

Previous Article News to Note, September 29, 2012 Next Article De-Regulation of an Existing Trait