Over the years, circumstantial evidence has suggested that the remains of Noah’s Ark have been found on the mountains of Ararat in Turkey. 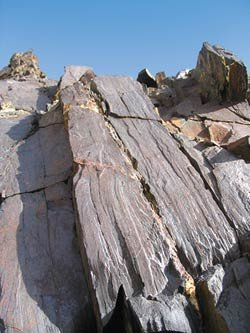 Some believe formations on Mount Suleiman in Iran to be part of Noah’s Ark. Others contend the evidence is strictly geologic.

In 2006, an expedition led by Bob Cornuke reported a formation of what looks like wood beams on Mount Suleiman in northern Iran.

Initial media reports indicated that some on the team felt they had located the Ark. However, in a telephone conversation, Cornuke (who is friendly toward Answers in Genesis) was careful to explain that, while he believes Iran to be the likely resting place, he does not claim to have found the Ark, only that the area deserves further research.

AiG scientists have not examined the hard evidence and cannot make a definitive comment. However, creationist geologists familiar with the formation say that information available to them points to a geologic source. For example, what appear to be wooden beams may be the fracturing of rock.1

Cornuke says, “It may be the Ark, but then it may not. The bottom line: Noah’s Ark was for yesterday, but Jesus is the Ark today. That object over there, whatever it is, is decaying. But we have a living Ark today, and we can go aboard. Trust Jesus for salvation!”