How the World Sees Noah’s Ark

Noah’s Ark is not just an old sea vessel floating alone in the pages of the Bible—it’s a modern marketing extravaganza!

Images of Noah’s Ark—mostly directed at children—are everywhere: on fine art prints, children’s books, wallpaper, toys, tapestries, greeting cards, T-shirts, magazine and TV ads, posters, wall decorations, and even business logos. And these images are not just aimed at the “religious” market; they are also hot items among the secular crowd.

Have you ever stopped to think how the Ark—such a powerful reminder of God’s judgment—became so popular, considering the rejection of the true account of Noah’s Flood by so many?

It can’t be because of what the Ark really stands for. The Bible says that people are willingly ignorant that “the world that then was, being overflowed with water, perished” (2 Peter 3:5–6, KJV).

A clue to the Ark’s popularity can be found in the Ark images themselves.

Redesigners of the Lost Ark

Most Ark images bear little resemblance to the one described in Genesis. Artists generally ignore the information in Scripture in favor of a wide variety of imaginative shapes, sizes, and themes. The most common version is a toy-like boat, stuffed full of cuddly animals that crowd around Noah. Why is that?

Some artists treat the Ark like an amusing myth or children’s fairy tale. They do not believe that the story is an account of actual events, and therefore they have no problem in doing anything they want with it.

Even artists and companies who believe the Bible’s account of Noah’s Flood sometimes choose to create a caricature of the Ark for artistic and sales reasons. For instance, small arks take less time to draw, are cute, sell well, and make it easy to show the entire Ark and animals in one scene. And small arks aren’t controversial, either, because they don’t look real. 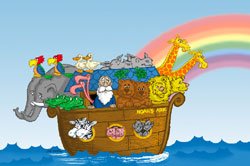 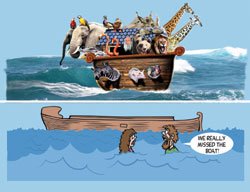 The cartoon ark (left) is an example of how Noah’s Ark is commonly misrepresented. However, the problem does not lie in cartooning as a form of illustration, but rather the degree of distortion applied in the specific cartoon. For example, when the same distorted cartoon ark is depicted in a realistic setting (right, top), the picture remains an absurd portrayal of Noah’s Ark. However, a cartoonist can draw the Ark in a way that reflects the true size and dimensions of the Ark described in Genesis (right, bottom). Cartoons can be a very effective way to communicate accurate truth to all ages.

An Ark of Biblical Proportions

In addition to a lack of accuracy, the modern arks have a more serious drawback. One of the most-asked questions about Noah’s Ark is how Noah fit all the animals into it. The size of the Ark is critical to the believability of the biblical account, and so is a realistic shape that could survive the Flood. Yet the Ark images that come to most people’s minds fall far short.

In our modern, media-saturated culture, it is true that seeing is believing, especially for young children. Images make a strong impression and often overshadow the biblical account, even for those who have a moderate familiarity with whatever event is being described. So while airplanes and other well-known objects may be fine to caricature, promoting poor caricatures of the Ark can be harmful.

Sadly, with the best of intentions, the Church has promoted cutesy caricatures of the Ark in Sunday school materials and other literature, leaving the world largely unaware of the real message of the Ark that God instructed Noah to build.

The Bible explains why the modern world is willingly ignorant. It’s because they don’t want to face the reality that judgment is coming again: “But the heavens and the earth, which are now preserved by the same word, are reserved for fire until the day of judgment and perdition of ungodly men” (2 Peter 3:7, NKJV).

Previous Article Has Noah’s Ark Been Found? Next Article Taking Back the Rainbow