Sturgeon, thought to exist in only around 29 species worldwide, have long been considered living fossils. But now a study published in Nature Communications has dubbed them winners in the race for rapid evolution in defiance of accepted evolutionary principles.

Molecules-to-man evolution, which has never been observed, is generally assumed to be a process requiring a series of changes over millions of years. Darwin coined the term “living fossil” to describe living organisms that have remained unchanged for millions of years. But rapidly appearing variations in an organism, such as those that may ultimately produce new species, are often cited as examples of rapid, observable evolution.

Within this framework, the authors of “Rates of speciation and morphological evolution are correlated across the largest vertebrate radiation” point out:

Several evolutionary theories predict that rates of morphological change should be positively associated with the rate at which new species arise. For example, the theory of punctuated equilibrium proposes that phenotypic change typically occurs in rapid bursts associated with speciation events. However, recent phylogenetic studies have found little evidence linking these processes in nature.1

Therefore, the researchers sought proof of this principle—the idea that the anatomical variety in a group of organisms correlates with its rate of speciation—in the highly diverse realm of ray-finned fish. “We're basically validating a lot of ideas that have been out there since Darwin, but which had never been tested at this scale due to lack of data and the limits of existing technologies,” lead author Daniel Rabosky said. 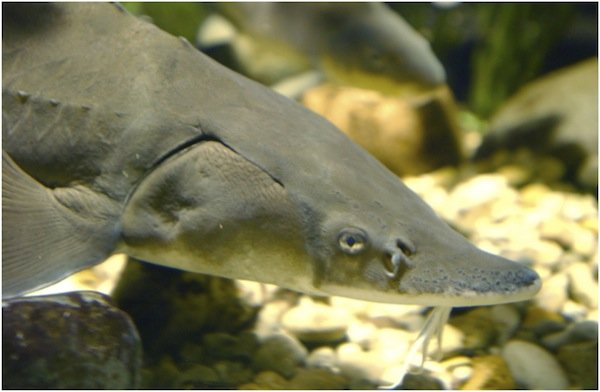 The sturgeon is widely viewed as a living fossil. Sizes vary, but some species have attained great size—18 feet long and 4,400 pounds—making them among the largest fish as well as some of the oldest. They can live over 100 years. The sturgeon pictured here is a lake sturgeon from the Great Lakes area where efforts are underway to reestablish fish populations. Image by Michigan Sea Grant, via nanopatentsandinnovations.blogspot.com.

Rabosky and colleagues analyzed the characteristics of 30,000 species of ray-finned fish, tracing their presumed evolutionary relationships. They actually performed molecular clock calculations for 7,864 living fish and inferred information about the rest from the evolutionary tree they constructed. For most families of fish, the number of known species did correlate with the “evolutionary rate” the team calculated. But the team reports that sturgeons, despite the small number of known species and their reputation as a living fossil, have had a rapid rate of evolutionary change in terms of body size. 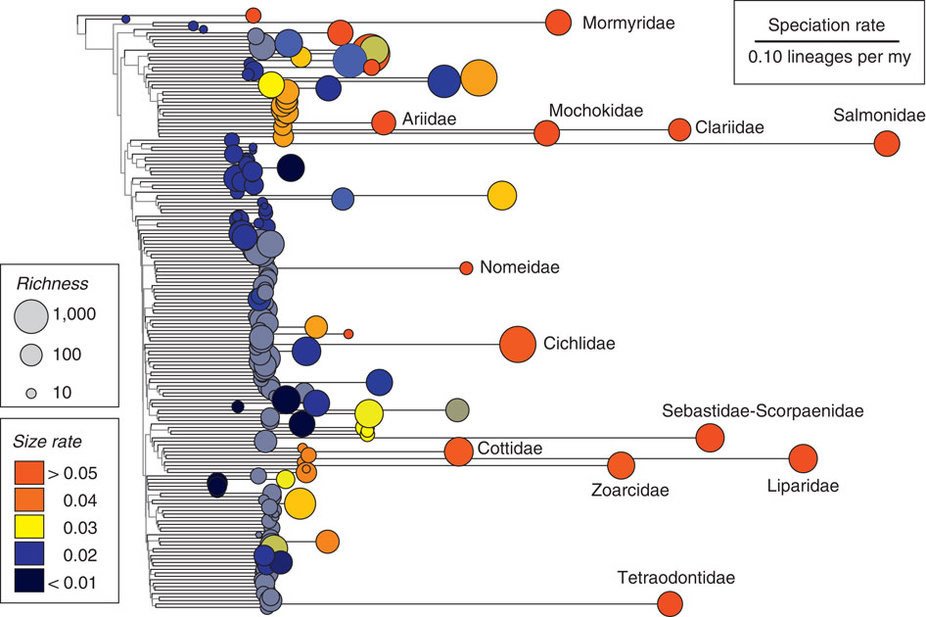 This chart from the article in Nature Communications correlates the size variability (denoted by color) with the calculated rate of speciation (denoted by bar length) in many families of fish. The rate of speciation depends upon presumptions about how many millions of years ago the fish evolved as well as observable information about the number of species in each fish family and the genomic variation in the family. Image Daniel L. Rabosky et al., via Nature.

“Sturgeon are thought of as a living fossil group that has undergone relatively slow rates of anatomical change over time. But that's simply not true,” said Rabosky, who is an assistant professor in the University of Michigan’s Department of Ecology and Evolutionary Biology. “Our study shows that sturgeon are evolving very quickly in some ways. They have evolved a huge range of body sizes. There are dwarf sturgeon the size of a bass and several other species that are nearly as big as a Volkswagen.”

Except for the sturgeon, the number of species did seem to correlate with the variation of body size seen in each family of fish. Gar, for instance, with few extant species, vary little in size. By contrast, the many species of salmon come in a wide variety of sizes. But the team calculated that in 100 million years of evolution sturgeon have produced wide variation in size but only 29 species.

Variations in body size . . . have nothing to do with the evolution of fish from non-fish or into non-fish.

What the reader should not miss, however, is the fact that nothing—absolutely nothing—in this study supports the principles of molecules-to-man evolution. All the fish are still fish. In fact, all the sturgeons are still sturgeons. Variations in body size, like variations in the number of species in a fish family, have nothing to do with the evolution of fish from non-fish or into non-fish.

Speciation—fast or slow—and variation occur within created kinds, which probably corresponds in many organisms to the “family” level of taxonomic classification. God created many “kinds” of fish on the fifth day of Creation Week about 6,000 years ago and designed them to reproduce after their kinds. Observable variation within these kinds does not require the evolutionary acquisition of new genetic information. And the team’s calculated millions of years of evolution are derived from molecular clock calculations with the millions-of-years assumptions already built into the calibrations.

The fact that the sturgeons alive today are like those in the fossil record is generally explained by factors such as their wide tolerance for environmental variation in temperature and salinity, their exceptionally long lifespan (over 100 years), and their long generation time (some not attaining reproductive maturity for 20 years). Sturgeon species are known to hybridize successfully,2 which is one source of their ability to vary and also the cause of much taxonomic confusion that DNA studies are resolving. Sturgeons are valued as a source of caviar as well as for their flesh. Habitat destruction, pollution, and overharvesting threaten sturgeon populations worldwide. The study of sturgeon variation is significant to efforts to protect and restore threatened sturgeon populations today. But this involves investigation of biological processes taking place today and has nothing to do with speculations about how sturgeons have varied for millions of years.

Previous Paper Show and Tell: What Can Chimps Tell Us? Next Article Malaria in the News