Show and Tell: What Can Chimps Tell Us?

Are there “striking similarities” in ape and human communication, and what do they mean?

Parents eagerly await their child’s first word, recording the age at which their little one joins the verbal world of his or her elders. Speech is a developmental milestone and a uniquely human ability. Psychologists who just published their analysis of the expressive triumphs of a toddler, a chimp, and a bonobo in Frontiers in Psychology, however, are concerned not so much with the way a child learns to speak as with the implications of language acquisition for the evolutionary origins of human language.

Evolutionists believe human linguistic ability evolved but debate how. Nevertheless, like many evolutionary linguists, the authors of “A cross-species study of gesture and its role in symbolic development” cling to the notion that a child learning to talk recapitulates the evolutionary steps that ape-like ancestors trod as they learned to speak and think abstractly. They grasp at any ape-human similarities as support for their position.

The authors believe gestures not only provide a scaffold to help a child build the ability to speak but also mimic evolutionary steps taken by our ancient ape-like ancestors. “Because behaviors such as language and gesture do not fossilize,” they acknowledge, “evolutionary links between gesture and language are impossible to prove.”1 Nevertheless, they say their findings support “the gestural theory of language evolution.”2 They claim “strikingly similar” human, chimp, and bonobo gestures provide reliable evidence that a common ape-like ancestor communicated using gestures and developed a latent linguistic capacity. They maintain that evolving humans with this latent ability transformed innate gestures into speech. In other words, they believe that gestures provided a scaffold on which an ape-like ancestor grunted his way up the evolutionary tree to become human. 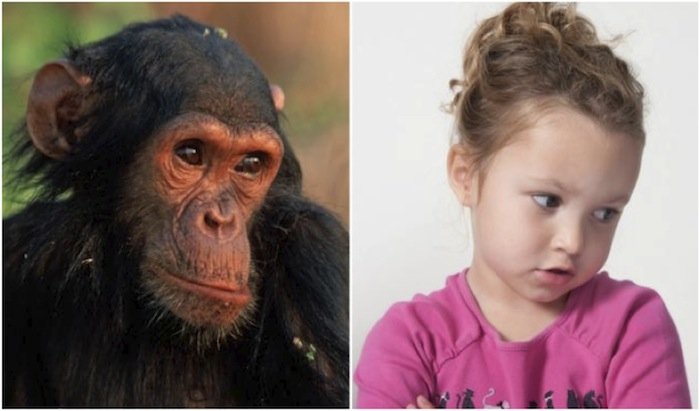 Children and apes being raised by humans know that holding up their arms to be picked up usually works. Does that mean this ape is harboring complex abstract thoughts just needing a better mode of expression? Do a few common gestures show that humans and apes acquired those gestures from a shared ancestor? Image by Daily Mail.

The researchers videotaped a little girl for one hour per month from age 8 ½ months until she was nearly two years old. They compared these videos with video footage of a chimp and a bonobo being raised in “language enriched environment [which] included ongoing activities wherein caregivers and apes communicated through gestures, lexigrams, and vocalizations, as well as daily language-testing sessions.”3 Lexigrams (see illustration) are “arbitrary visual symbols representing words.”4 When a lexigram was pressed, a person or electronic voice said the word. “As with human children, lexigram symbols were learned within the context of ongoing activities that were relevant to the apes.”5

However, the apes actually failed to support the theory.

The apes’ use of lexigrams was considered equivalent to the child’s use of spoken words. After the apes were trained to associate lexigrams with their meanings, they sometimes used them to make requests. The researchers “hypothesized that all three species would exhibit a shift from greater reliance on gestures to greater reliance on symbolic communication with development”6 and wrote, “Such evidence would support the gestural theory of the evolution of language.”7 The child of course learned to use “spoken symbols” (i.e., to talk). However, the apes actually failed to support the theory, for the apes “continued to communicate more frequently by gesture than by symbol.”8

The psychologists noted whenever a gesture was used alone and later combined with a spoken or pictographic symbol. This pattern was viewed as support for the theory of language acquisition through gestures. Though the researchers praised their apes for using this gesture-symbol approach to learning, they admitted that it was “statistically significant only for the child.”9

Dr. John Oller, Jr., an expert in the field of language acquisition and communication disorders (especially autism),10 describes this as only one of many examples in which “it seems that the researchers were willing to go to great lengths to try to find similar patterns even where all they got were contrasts. The gaps were so evident that only by cherry picking and strange manipulations of their data were they able to get the apes on the same scale as the human subject.”11 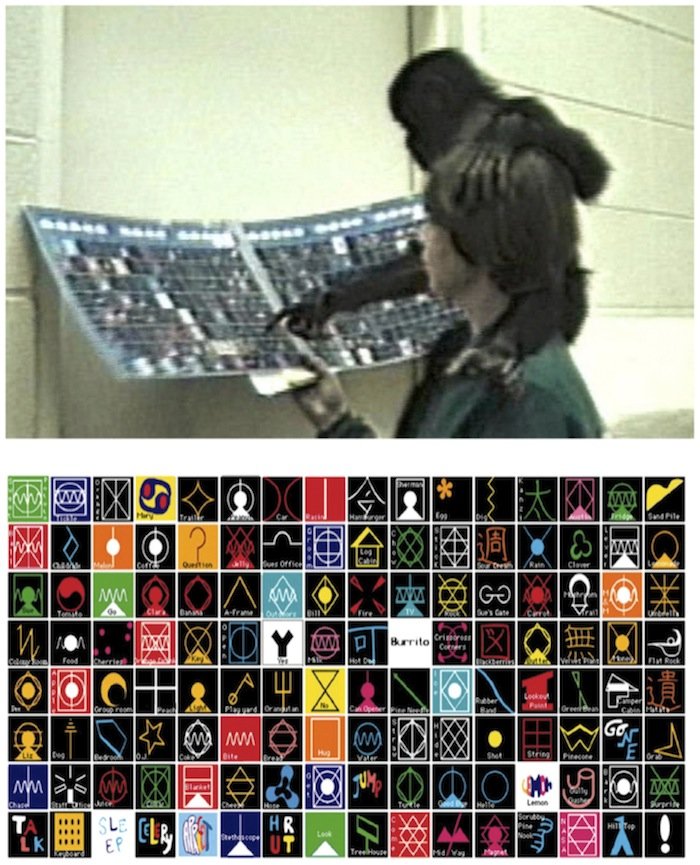 Apes were taught to associate each “lexigram” symbol with its meaning and a spoken word. Image by www.frontiersin.org.

Furthermore, despite coauthor Patricia Greenfield’s assertion, “The similarity in the form and function of the gestures in a human infant, a baby chimpanzee and a baby bonobo was remarkable,” the child’s repertoire of “gestures” was incomparably richer than the apes’. There were a few gestures common to both child and apes, as well as some unique to each. Common gestures included reaching for a desired object, pointing to an object—which is often observed in apes and even dolphins raised in a language-rich captivity12—and holding up the arms to be picked up. “Head-pointing”—which only occurred once for the child and once for one ape—was also classified as a common gesture.13

The “list” of gestures unique to the apes was rather short. Once the chimp held its palm outstretched, and once the chimp guided the caregiver’s hand to the object she wanted. (That’s the whole list.) The researchers also tried to credit the apes with additional communicative behavior—such as responding to speech, demonstrating awareness of whether they had a human’s attention, and making eye contact to let the human know they were trying to communicate. Dr. Oller notes that trained dogs do the same, “but no one would claim that the dog is an immediate ancestor of humans or that barking preceded speech.”14

The child, on the other hand, displayed a wealth of meaningful unique gestures. She held up objects for her parents to see, nodded, shook her head, mimed twisting a doorknob to indicate open, waved, and used the finger-to-pursed lips symbol for shhh. The study’s authors indicated that substantial gestural similarities in the three species would support their theory.15 But despite the success they claim, the data they report shows just the opposite. In addition to the unique gestures produced by this toddler, Dr. Oller notes that infants exhibit “smiling, laughing, facial expressions” and even “vocal turn-taking at birth.”16 Apes certainly fail to meet these demands upon their evolutionary cousin-ship.

Dr. Oller considers the researchers’ hypothesis—the idea that language development in a child recapitulates linguistic evolutionary steps—“unworkable.” Commenting on their “evidence,” he says,

All in all, the authors made an incredible effort to force an unworkable theory to accommodate their uncooperative data. The facts just don't support their preconceived ideas. Even when viewed through the distorted telescopic lenses of orthodox evolutionists, the kind that can supposedly see across “five to six” millions of years, the facts still show that the human child is equipped to use abstract symbols in interactions with others and, as they acknowledge, “to share experience for its own sake” (p. 10),17 [something apes do not do].

The authors, however, find themselves at fault for the failure of their apes to compete with the uniquely human symbolic capacity: [they write,] “Given limitations of the lexigram system devised to help apes communicate with us, compared with the flexibility of human speech, gestures may be a better match than symbols for apes but not humans.”18,19

Humans, unlike animals, are designed with an innate linguistic capacity. When children speak they are using symbols to communicate abstract ideas they already have, Dr. Oller explains. “Abstract concepts precede the use of words. . . . Children have to have the abstract ideas, the symbolic wherewithal first, before any language acquisition occurs.”20

The authors write, “Gestures seem to provide a foundation for each new stage in early linguistic development,”21 but Dr. Oller notes that Noam Chomsky (the father of modern linguistics) ”has even argued that all the concepts for language have to be in place before any language acquisition can occur.”

The language counterfeit seen in these animals differs markedly from the true language seen developing in the child. The “language” used by the apes is a poor copy of human language because it is unsupported by abstract thought. Dr. Oller remarks, “Chomsky pondered how strange it would be to discover that apes, dolphins, and other creatures have had the language capacity all along but just never thought of using it.”22

Indeed, what sort of deep abstract thoughts might dolphins or these apes wish to communicate to their human surrogate parents? Certainly no demonstrable ones. These animals were supplied with symbols and trained to associate those symbols with familiar objects and activities. Humans supplied them with communication tools, but the animals did not replace their gestures with lexigraphic symbols. Dr. Oller says,

Apes can get something from us that resembles language, but does not quite get there. . . . Their argument is a little like taking a plane load of apes up in a military jet and claiming that they have taken the first needed step to becoming fighter pilots. Given a few more million years. . . .

The work of Gillespie-Lynch and colleagues merely underlines the conclusion: the human language capacity is a product of surpassing Intelligence. It is prima facie evidence that the Invisible God made human beings with such a capacity.23

God created Adam and Eve on the same day He created land animals, about 6,000 years ago. God instructed Adam to name the animals and warned him not to eat of a particular tree, so we know that God created man with language. Man did not evolve as a primitive brute who gradually learned to talk while evolving a bigger better brain. The biblical record that God created man and woman in His own image explains why humans alone are capable of communicating unique and creative abstract thoughts with language.