Dying to Live Another Day

Crawling in burrows, hopping across fields, and swimming down rivers is an odd assortment of creatures, determined to live no matter what hardship comes their way. Whether they face a deep freeze or deadly drought, these creatures can shut down their bodies until their situations get better.

Death holds a morbid curiosity for many people. Its unexplained mysteries and its darkness bring out our curiosity. The recent resurgence of vampire and zombie lore is a perfect example. These creatures of horror seem to defy death. Is death something we should laugh at, be scared of, or willingly embrace?

Since Adam’s Fall, death has haunted life. Death is a nasty intruder, and we spend our lives trying to avoid and ignore it.

Animals seem to share our distaste of death, avoiding dead creatures they didn’t kill. Some animals seem especially well equipped to escape death’s clutches, at least for a time. Through various forms of suspended animation, some animals appear to die, only to return to the land of the living after hours, months, or even years. 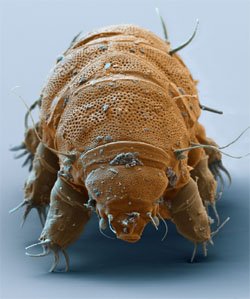 A water bear can survive without water for decades.

Perhaps one of the most stunning examples of these death-defying creatures is the tardigrade, more commonly known as the water bear. As their name suggests, water is just as important to these one-millimeter water bears’ survival as to any other life form. But they can live for nearly a century without it. They do this by “killing” themselves.

When the patch of moss they live in begins to dry out, water bears start shutting their systems down. They fold their eight legs into themselves, bend in half, and secrete a waxy substance over their surface. The wax helps prevent the loss of water while the water bear is in the “tun” state. Their metabolism shuts down—they are essentially dead.

But even decades later, the simple addition of water brings these tenacious critters back to life. The water bear resumes its ponderous gait, eating and reproducing as if nothing extraordinary had occurred. 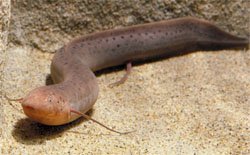 A lungfish can avoid drought by cocooning itself underground for up to four years.

The water bear doesn’t have a monopoly on escaping death. Lungfish, found in Africa and South America,1 use a different trick to avoid the effects of drought. By undergoing an extreme version of seasonal dormancy called estivation, lungfish can survive for years without water. Estivation is similar to hibernation, but the goal is to avoid drought and intense heat rather than severe cold and food shortages. After all what is a fish to do when the lake dries out?

Before the water is completely gone, lungfish dig into the mud and get comfortable. As the mud hardens, the lungfish wraps itself in a presumably waterproof cocoon, open only at the mouth. This allows the air-breathing fish to continue respiration. The lungfish remains underground until water returns. It can wait for up to four years!

The lungfish can survive so long because it reduces its metabolism to as little as one-sixtieth the normal level. Imagine if yesterday’s meal kept you satisfied for two months. Just add water (enough to swim in), and the lungfish will leave its dugout to resume normal activity. 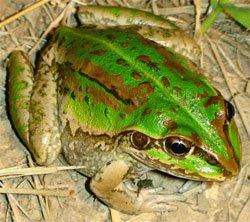 A striped burrowing frog buries itself for up to seven years.

The striped burrowing frog also digs into the mud when times get hard. But these frogs can survive for seven years in suspended animation before needing to emerge. During estivation, each of the frog’s cells retools its engines, called mitochondria, thereby increasing efficiency. This is the biological version of just having the pilot light on.

The mitochondrion is the “power plant” of the cell. By increasing its efficiency, more energy can be produced, stretching the frogs’ last meal and fat reserves much further. Frogs depend on wet conditions almost as much as fish do, so such special designs are essential to survival. The return of water works magic for these frogs.

This raises the question—why don’t all animals have such efficient mitochondria? Mitochondria need oxygen to generate energy molecules. Unfortunately, the presence of oxygen also produces molecules known as free radicals. These molecules can wreak havoc on DNA, proteins, and other parts of the cell. The more free radicals in your system, the more damage that must be repaired.

During estivation, striped burrowing frogs can reduce their metabolism by as much as 82%, consequently dropping their oxygen demand. This in turn produces very few free radicals to cope with. When frogs come out of estivation, they produce a special protein that protects them from those mischievous free radicals. 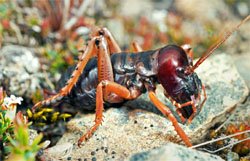 The mountain stone weta, a large insect in New Zealand, can survive being frozen for the entire winter.

The reason? Water expands, forming ice crystals as it freezes. While this is handy for floating ice and beautiful snowflakes, it means that water in any cell will burst the cell’s membrane, with disastrous results. How does the weta survive?

The weta’s blood is very different from people’s. Called hemolymph, it is full of special sugars that prevent the water from crystallizing into mini ice chunks. This preserves the cell structure and allows the weta to survive temperatures down to 14°F (-10°C) for several months. Once it warms up, the weta thaws and resumes life. 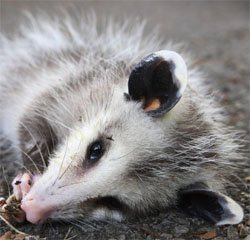 An opossum can avoid predators by appearing dead and unresponsive for hours.

The obvious example of such behavior is the opossum of North America (not to be confused with the possum found in Australia). In fact, the opossum is so well known for its ability to play dead that it has infiltrated our language. But what does it mean to “play (o)possum”?

When an opossum is threatened with no avenue of escape, it will hiss to scare the threat away. Failing that, it will play its ace in the hole. The opossum will draw its lips back, foam at the mouth, and fall to its side. Its eyes will half-close and a foul-smelling fluid will start oozing. The body will be so stiff and unresponsive that the opossum won’t respond when poked, bitten, or even carried off. The entire display hinges on one vital principle—predators would rather kill their own dinner. Eating a stinky animal that just “died” might be a sure-fire way to come to your own smelly end.

All this may be old news to some people. Opossums play dead to avoid being eaten, so what? The miracle of this death is that scientists don’t understand how the opossum does it. They can’t figure out whether the opossum consciously controls its display of “apparent death” or if it’s triggered automatically in high-stress situations. The reduced heart rate and breathing is analogous to a person fainting, which is not a controllable reaction. But studies show that the opossum’s brain activity is just as engaged and alert as ever. Once the threat dissipates, the opossum wakes up in a matter of minutes. 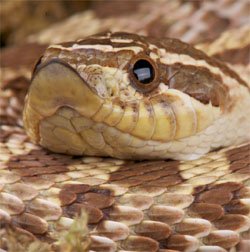 A hognose snake can avoid predators by appearing dead and unresponsive for hours.

The hognose snake seems to take a page out of the opossum’s playbook but with more flair. When his imitation of a cobra fails to impress, he begins his great death scene. The snake will flip over onto his back with his mouth agape and tongue hanging out and writhe on the ground in abject agony. Once he is sufficiently covered in debris and excrement, he will lie there, smelling like a sewer until he is left alone. In fact, he is so dedicated to his performance that should you have the audacity to turn him right side up, he’ll reflexively flip himself back over. Nevertheless it doesn’t seem to ruin the effectiveness of the ruse. The minute you move on, so will he.

Genesis 3 explains where death came from. Adam and Eve chose to disobey God. While some animals have the ability to delay death for a time, each one will still die. The promise of Jesus Christ gave hope that God would conquer death, not merely delay its arrival. So while these animal designs remind us about our natural desire to defy death, our efforts merely delay the inevitable. Only Christ’s sacrificial death on the Cross, the innocent for the guilty, could defeat death and open the way for each of us to enjoy eternal life. “If you confess with your mouth the Lord Jesus and believe in your heart that God has raised Him from the dead, you will be saved” (Romans 10:9).

The Science of Staying Still

ANHYDROBIOSIS is a state of suspended animation that allows a creature to survive without water. The water bear’s skill at this has inspired research into new ways to prepare vaccines. If doctors could produce a dry vaccine, more people could benefit.

ESTIVATION (or aestivation) occurs when an animal needs to avoid severe heat and dry conditions. Typically, the animal buries itself in the ground, where temperatures are cooler, and reduces its metabolism until conditions turn favorable.

THANATOSIS is the process of animals’ feigning death. It is often used as a defense, as demonstrated by the opossum and the hognose snake.

HIBERNATION is common among rodents like chipmunks. This conserves resources when food is scarce. Hibernation can last for days or months, depending on the animal, temperature, and time of year.

BRUMATION is the reptilian version of hibernation. Reptiles’ activity drops to almost nothing, although they still need to drink occasionally. Reptiles can brumate for up to eight months.

DENNING is what bears do (a milder form of hibernation). When a bear dens, its sleep is undisturbed through the winter (except when females have cubs). Additionally, its body temperature drops only slightly, as opposed to the drastic drops that other hibernating animals experience.

Previous Article Old-Earth Creationism—Is It a Sin? Next Article Would He Condemn People to Eternal Torment?