Living in a Bubble

Turn on Christian radio or TV or attend church in the Western world and you will no doubt hear pastors lamenting the decline of Christian morality in society.

These pastors will probably present the need for the world to turn to Jesus Christ. Many will also speak openly against abortion, homosexual behaviour and other social ills, and lament the increasing anti-Christian legislation and the elimination of Christianity in society.

Notice, though, that all the above relate to spiritual and moral issues. I suggest that therein lies the real problem. All these issues are really symptoms of something far greater, more sinister and far-reaching than most imagine. In fact, the church, not the world, is ultimately responsible for destroying the very spiritual/moral aspect of the culture that they now recognize is in tatters.

The church is desperately trying to retain and rebuild the spiritual and moral aspects of Christianity, but it really is a lost cause—unless the church recognizes the fact that the Christian message no longer has a “physical reality” to connect to. I mean, simply, that the church, by and large, has disconnected the Bible from the reality of history, which is foundational to the moral and spiritual matters they so desperately want the world to accept.

Ever since the Garden of Eden, there has been a battle over the authority of the Word of God. Paul warns us in 2 Corinthians 11:3, “But I fear, lest somehow, as the serpent deceived Eve by his craftiness, so your minds may be corrupted from the simplicity that is in Christ.”

In other words, the devil is going to try to do today what he did to Eve (and Adam), getting them to doubt the clear Word of God. He asked them, in essence, “Did God really say that?” (Genesis 3:1).

Through the ages, different methods have been used by the devil to cause people to doubt God’s Word.

Unfortunately, most in the church have been blinded to Satan’s particular methodology in the modern era; in effect, they have even helped the Evil One undermine the authority of the Word of God.

In the late 1700s and early 1800s, the idea of long time periods for forming the fossil-bearing sedimentary rock layers was becoming popular. This, in essence, is where the idea of millions of years for the age of the earth really developed, and is the key to understanding Satan’s strategy today. Sadly, many church leaders have succumbed to the idea of “millions of years”, and thus have reinterpreted the Bible to fit these eons of time into the biblical text. The Days of Creation were thus reinterpreted to mean long periods of time. And the Flood of Noah’s day was relegated to being just a local event; the Bible’s geology was replaced with secular geological history.

When Darwinian evolution became popular, many church leaders then replaced the Bible’s biology (the creation of distinct “kinds”) with secular biological evolutionary ideas. Then the Bible’s anthropology (the creation of the first man from dust and first woman from his rib) was replaced by secular anthropology: man descended from some ape-like ancestor. Eventually, the Bible’s astronomy was replaced by secular cosmology such as the “big bang” idea, and so on.

The church, by and large, progressively gave up the literal history in Genesis and began to capitulate to secular history. As they did, church leaders still wanted to cling to the spiritual and moral aspects of Christianity. So, for the most part, the church held to these (e.g. the message of Christ and the gospel, Christian morality, etc.), while also teaching its congregations (and the world) that the secular history of the universe could be embraced—so long as God was still somehow involved.

For a while, this seemed to work. But the church’s disconnecting of the spiritual and moral aspects of Christianity from biblical history (which involves geology, biology, etc.) had two major consequences:

The following series of diagrams illustrates this sequence of events: 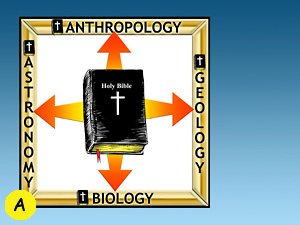 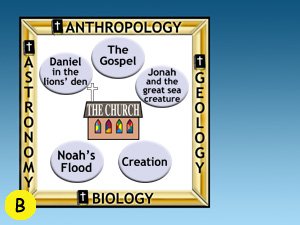 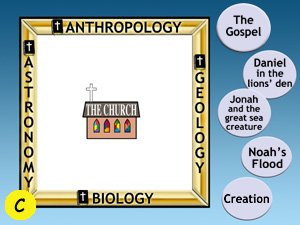 A. The Bible is not just a book about salvation and morality; it is a book of history. This history encompasses biology, geology, anthropology, astronomy, etc. The Bible is not a science textbook as such (these change every year, after all!), but it does reveal the true history of the universe, enabling us to build the big picture of history in regard to biology, geology, etc., so the evidence of the present can be correctly interpreted.

It is this history, represented as a frame around the Bible, that in fact is foundational to the spiritual and moral aspects of Christianity—holding all of these things together.

B. Everything that the Bible teaches (including all those great accounts of biblical history we are familiar with—Daniel, Noah’s Flood, the gospel, etc.—is connected to this history (and its science). Noah’s Flood, for instance, connects to geology, biology and anthropology.

C. Most of the church, however, teaches biblical history as just a group of “Bible stories” disconnected from this history—i.e. outside the frame. For instance, Sunday school teachers would say they don’t teach geology, biology, etc. in Sunday school, as, in their view, these subjects should be taught in school, not church.

Most students (as well as adults) growing up in church look on it as just teaching spiritual and moral things as part of biblical history, but not dealing with geology, anthropology, etc.

But the majority of students from church homes attend government-run schools where they are taught a history (involving geology, biology, anthropology, astronomy, etc.) that blatantly contradicts biblical history. What is the consequence?

Research indicates that around 70% of teenagers involved in church youth groups will walk away from the church once they leave school, or shortly after.1

Generations of church-going students, once indoctrinated to believe the world’s history concerning geology, biology, etc., have become more consistent in realizing that if the Bible’s history cannot be trusted, then, ultimately, neither can the message of salvation nor morality that is based in biblical history.

When the church began to adopt the world’s geology back in the late 18th and early 19th centuries, a “bubble” began to form around the church. This “bubble” represents the disconnect between the Bible and its history, which history is what holds everything together.

If the Bible’s geology (e.g. a global Flood, and that dead things could not have existed before sin, thus there was no fossilization of animals and man before sin, etc.) is replaced with the secular view of millions of years of death before man, then this is disconnecting the Bible’s “spiritual things” (including the message of the gospel) from the physical history that is foundational to it. If the Bible can’t be trusted in geology, this unlocks that “door” to question other parts of the Bible. Thus, the Bible can’t be authoritative or absolute, and fallible man can use his ideas from outside the Bible to reinterpret God’s Word. This “cancer” has permeated the church and society, with the result that the world is increasingly rejecting Christian morality and salvation.

In our modern time, the church now is represented as totally enclosed in a bubble. The church has adopted/sanctioned the secular accounts of history, but still tries to cling to the spiritual and moral aspects of Christianity.

But this bubble, with its morality and message of salvation, cannot exist inside this secular framework—it is the wrong basis. 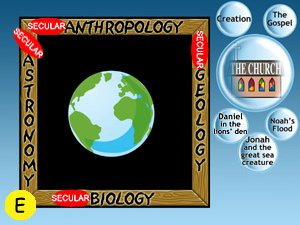 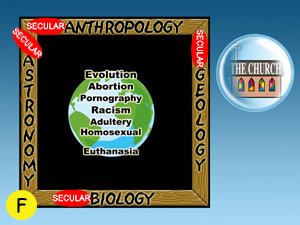 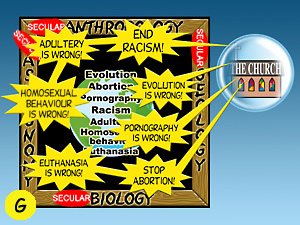 E. Thus, the true situation is that the church in its bubble is really outside this framework of secular history, teaching these Bible stories as disconnected from real history.

Now all those who are inside the secular framework of history have begun (consciously or unconsciously) to conclude that what the church teaches must be just opinions or stories—not absolute truth, as none of it is ultimately connected to real history.

F. Those inside the secular framework begin to construct a worldview that is now consistent with this secular history. If you believe man is just an animal, then that affects your view of abortion. If Genesis is not literal history, then marriage could be defined any way you wanted to—two men or two women.

Even for those in Sunday school, church youth groups, etc., if they have been told that you can reinterpret the Bible’s history on the basis of man’s theories, then surely you can also do this with morality. Why stop at the physical world? Why not reinterpret the moral world also?

Thus, in the world (and even the church), there begins to be a rise in the acceptance of abortion, homosexual behaviour, adultery, etc.

G. Now the church (particularly its older generation) is looking at the world and is horrified at the increasing immorality and rejection of Christianity.

The church, from its “bubble”, battles the world in opposing social ills, and just tells the world to “trust in Jesus”. But as much as the church tries, it is losing the culture, because it lost the “war” a long time ago.

Because the church gave up the real history of the world and yielded it to the secular, it lost the foundation for the spiritual and moral things it has tried to cling to.

This is why, as you sit in most churches, turn on Christian TV or radio, you will find most Bible teaching is within this “bubble”. Most in the church do not understand that we need to re-establish the teaching of geology, biology, anthropology, etc. (from a big picture perspective—not necessarily the technical details) in Sunday schools, youth meetings and, most of all, from the pulpit.

Until the church understands that it needs to regain and defend its true history, and reconnect the Bible’s spiritual and moral things to this history, we will continue to be shocked by how fast the church continues to lose its influence.

As Jesus said in John 3:12, “If I have told you earthly things, and you believe not, how shall you believe, if I tell you of heavenly things?”