Cousin Achilles: The Little Primate That Could

An ounce of primate prompts a pound of speculation.

A tiny primate dubbed Archicebus achilles, dated about 55 million years, is taking center stage as the oldest known primate and, at less than an ounce, the smallest.1 Evolutionary paleontologists believe it is the missing link between tarsier-like primates and the anthropoid primate line that includes humans. Xijun Ni, lead author of the paper in Nature, says, “This skeleton will tell us a lot of the story about the origins of primates and about our remote ancestors.”2

Archicebus means “original long-tailed monkey” although it resembles a tarsier, which is not a monkey. Achilles was the Greek mythological hero whose heel remained vulnerable when his mother Thetis failed to wet it in the River Styx. He lends his name to the species because its heel resembles not a tarsier’s but a monkey’s. Evolutionists therefore believe Archicebus achilles resembles the common ancestor of both. 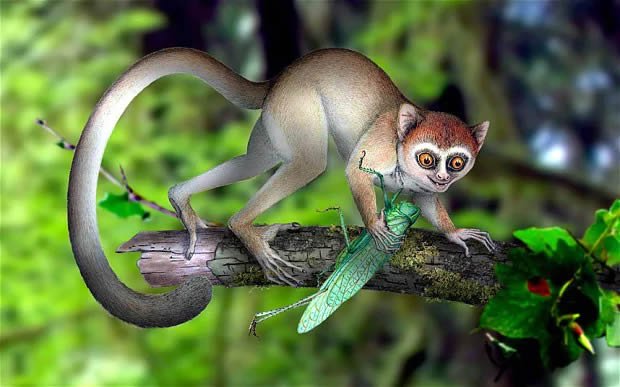 This is an artist’s reconstruction of Archicebus achilles, put forth by evolutionary paleontologists as the oldest primate yet recovered from the fossil record. Researchers believe it is the missing link between the tarsier-like primates and anthropoid primates, including humans. Image by Xijun Ni/AP, via The Telegraph.3

Readers may recall a primate said to be older than this one, the 65 million year old Purgatorius from Montana. Purgatorius, represented by a box of ankle bones, drew media attention last year for evolving as a successful primate by the end of the age of dinosaurs. However, Purgatorius’s identity as a primate is in dispute. Researchers reporting on our purported little cousin Achilles hope to avoid similar controversy. They have a more complete specimen which, since being obtained from a farmer in eastern China in 2002, has been subjected to ten years of computer analysis and imaging at the European Synchroton Radiation Facility. 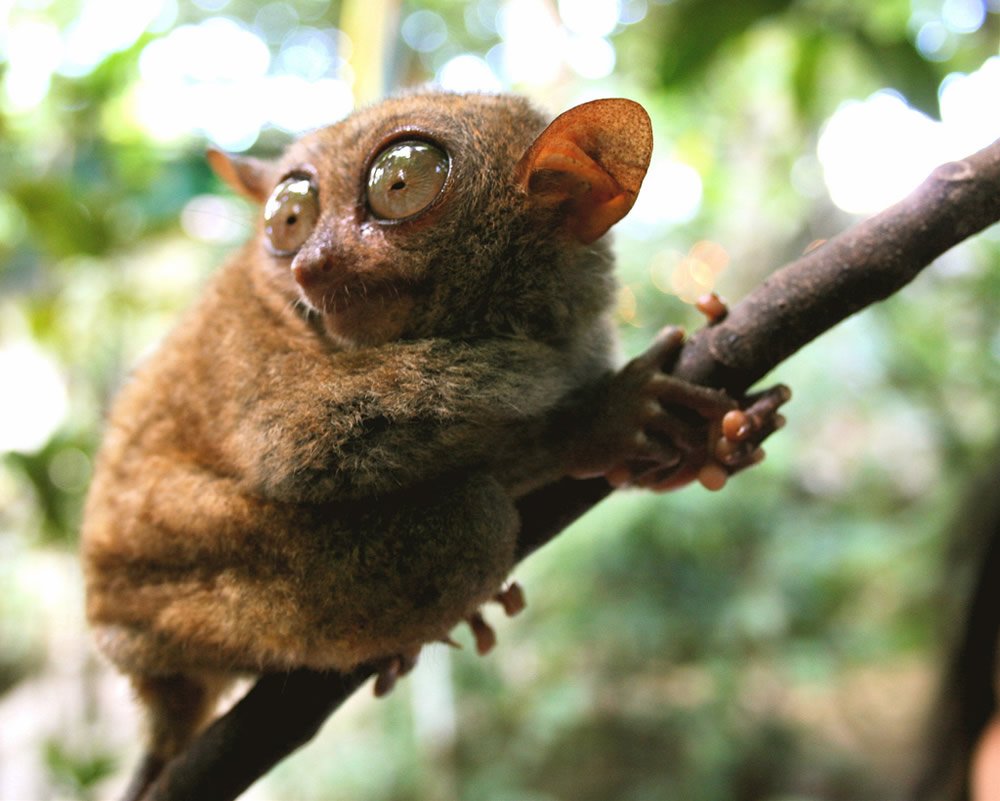 This is not Archicebus achilles. This is a tarsier. There are seven known species of tarsier, which may constitute a created kind of primate. Tarsiers are in the suborder Haplorrhini. The name tarsier is derived from the elongated tarsal (ankle) region. Long digits with rounded pads at the tips are able to grasp very effectively. The skeleton of the fossil Archicebus achilles has many similarities with the tarsier, but A. achilles has small eyes, short toes, and a short heel bone and therefore, while it may be of the same suborder, is not considered a tarsier. Evolutionists believe these unique features are primitive traits shared with anthropoids and therefore show A. achilles evolved soon after anthropoid primates diverged from the tarsier branch. Image by the Wandering Angel, via Flickr.

Advanced imaging of slabs holding the skeleton and bony impressions has produced a three-dimensional reconstruction of the fossil. Though its skull is crushed, much of its lower skeleton remains intact. Despite its small eyes, computer analysis of about 1,200 skeletal features shows it is most similar to the tarsier. However, Archicebus achilles’s heel more closely resembles a monkey’s. Monkeys, apes, and humans are classified as anthropoid primates, but tarsier-like animals are tarsiform primates. Therefore, the authors believe their fossil represents a missing link between tarsiform primates and the anthropoid lineage from which they believe humans evolved.

Christopher Beard of the Carnegie Museum of Natural History in Pittsburgh, Pennsylvania, explains his team’s conclusions:

Here is a fossil that is very, very close to the evolutionary divergence of tarsiers and anthropoids. The heel and foot in general was one of the most shocking parts of this fossil when we first saw it. The foot looks like one from a small monkey, a marmoset. The heel bone is the reason we named it Achilles in the end and it looks like one from the earliest anthropoid we had evidence for. I think what it means is that the common ancestors of anthropoids and tarsiers had features that were more like anthropoids than tarsiers.4 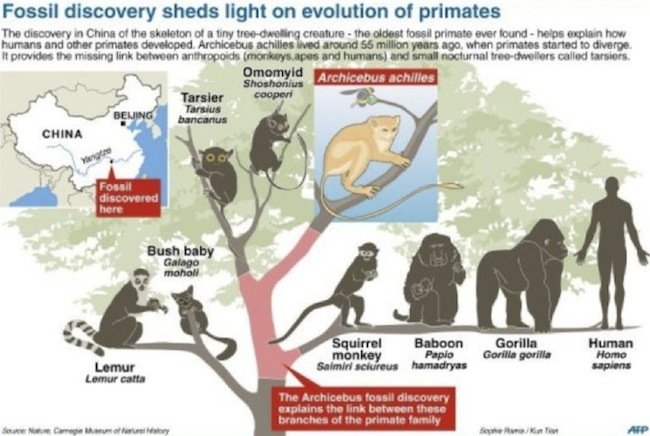 This diagram shows the place on the primate evolutionary path assigned to Archicebus achilles. Having some features resembling tarsiers, the fossil is placed in the same suborder as tarsiers. With an assigned an age of 55 million years and a heel that is more like a monkey’s, however, evolutionists believe it is the missing link between the tarsier’s suborder and the suborder containing humans. Image: AFP/Graphic through www.google.com/hostednews

The animal’s trunk was less than three inches long, and in life it weighed less than an ounce. Its teeth resemble those of insectivorous mammals. It had slender limbs, slim fingers for grasping, and a long tail. The authors believe its small eyes mean it evolved for daytime living. Xijun Ni says, “It would have been an excellent arboreal leaper, active during the daytime, and mainly fed on insects.”5

Because it was so small, Beard believes that to avoid losing body heat A. achilles “was probably quite a frenetic animal, and even anxious. It would have moved around a lot looking for its next meal climbing and leaping around in the canopy.”6 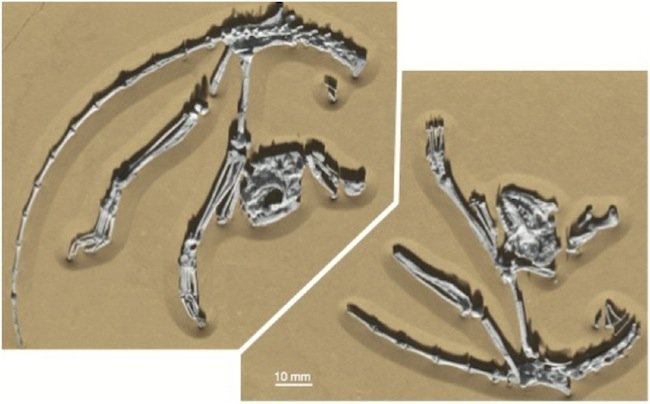 This is a digital reconstruction of the fossil Archicebus achilles. Computer analysis of the 3D images show it had more in common with a tarsier than any other known primate, but its feet were more like a monkey’s. The crushed skull also had smaller eyes than the wide-eyed nocturnal tarsier. Image by Xijun Ni et al., via Nature.7

Explaining why he considers the animal a missing link, Beard says,

Archicebus differs radically from any other primate, living or fossil, known to science. It looks like an odd hybrid, with the feet of a small monkey, the arms, legs and teeth of a very primitive primate, and a primitive skull bearing surprisingly small eyes.8

What this new fossil is telling us is that the common ancestor of tarsiers and anthropoids really was a hybrid. It would not have been in any way completely monkeylike, but it certainly wasn't completely tarsierlike, either. It had certain features of both lineages already present.9

Primates are mammals with forward-looking eyes, five-fingered grasping hands, and five-toed feet, usually with nails. Evolutionists generally believe humans evolved in Africa and therefore tend to place the evolutionary origin of primates in Africa, but some have proposed that primates got their start in Asia.

Beard has been ridiculed for suggesting primates evolved in Asia and then migrated to Africa 38 million years ago, providing the raw material for the eventual evolution of humans from ape-like ancestors. Believing this fossil supports his position, he says “Recent palaeontological advances have really indicated that the first and most pivotal steps in primate evolution, including the beginnings of anthropoid evolution, almost certainly took place in Asia, rather than Africa, which is the received wisdom that we all thought roughly two decades ago.”10

“Disagreements persist regarding the palaeobiology and phylogenetic relationships of the earliest primates,”11 the authors write, research being “impeded by gaps in the fossil record.”12

Dr. Jean K. Lightner, author of recent papers concerning baraminology published in Answers Research Journal,13 commenting on the study, says, “Evolutionists work on the assumption of universal common ancestry, and there are many places that assumption hasn’t been going so well for them, including right here. There are gaps and disagreements on the primate family tree. This fossil, since it is relatively complete and considered old, should be helpful if their assumption of common ancestry were true.”14

The combination of proportions seen in this fossil’s foot—a moderately short heel like a monkey’s, a long mid-foot similar to that of a monkey (or a tree shrew), and long toes most like a tarsier’s—“is unique among living and fossil primates.”15 Because this combination includes subtle characteristics seen in animals evolutionists believe to be on different evolutionary paths, the researchers said the mosaic of features was “unexpected.”16

They do not abandon a priori belief in common evolutionary ancestry of all living things.

Dr. Lightner observes, “It certainly wasn’t expected within their framework. However, they are constrained to common ancestry, and certainly aren’t considering other options. So how do they view it?”17 They do not abandon a priori belief in common evolutionary ancestry of all living things. Instead, they resort to “posing novel possibilities for reconstructing how modern tarsiers and anthropoids evolved.”18

Advanced imaging at the European Synchroton Radiation Facility with analysis of 1,200 skeletal features gives us great anatomical information. However, it does not provide proof that the primate evolutionary tree represents reality, either in Asia or Africa. Ten years of peering at this tiny primate reached into the rock concealing some of its parts. Yet that analysis cannot reach back into 55 million years of unwitnessed history to prove the animal was a missing link in an evolutionary progression from primates to people. The imaging studies greatly increased the anatomical information that could be gleaned about this extinct primate’s skeleton. But the presence of some skeletal features that don’t appear on any living primates just indicates the creature is a previously undiscovered species.

This study is a marvelous example of comparative anatomy. It shows a species variation that may force paleontologists to puzzle over whether the animal was a kind of tarsier or a different kind of primate altogether. But having a heel bone a little wider and shorter than those of tarsiers19 and small eye sockets does not mean the animal was an evolutionary missing link. The question should be “what was it?” not “what was it becoming?”

Science reveals that animals vary within their kinds, but no research shows animals evolving into new and more complex kinds of animals. Observable biology does not support molecules-to-man evolution. Extinct animals in the fossil record are just examples of biodiversity, not signposts along the hypothetical evolutionary origin of humanity. God created all kinds of land animals and man on the same day about 6,000 years ago. The record of many animals, extant and extinct, is preserved in the fossil record. But sedimentary layers containing billions of fossils are largely associated with the global Flood and post-Flood catastrophes. They represent the order of burial, not the evolution of life.

Previous Article The World’s Oldest Water? Next Paper Show and Tell: What Can Chimps Tell Us?