Archaeopteryx Has Flown the Coop

A new find has forced evolutionists to sideline Archaeopteryx and change their story.

For many years, evolutionists have pointed to fossils of the iconic Archaeopteryx as the earliest example of birds evolving from reptiles. It was the quintessential “missing link,” though creationists countered that it was just a bird, similar to those flapping around today.

A new find has forced evolutionists to sideline Archaeopteryx and change their story.

A new find is forcing evolutionists to sideline Archaeopteryx and change their story. Chinese scientists recently discovered another creature with “feathers,” named Xiaotingia zhengi, which evolutionists view as older than Archaeopteryx, based on their old-age dating assumptions. After comparing both of these creatures with modern birds and dinosaurs, the researchers concluded that neither is directly related to modern birds. In fact, they propose classifying both Archaeopteryx and Xiaotingia zhengi in the dinosaur group of Velociraptor (Deinonychosauria).

The journal Nature wondered how creationists would respond to Archaeopteryx’s loss of position at the base of the evolutionary tree: “Given this iconic role, Archaeopteryx has also been in the crosshairs of creationists, and remains a lightning rod for political debates and legal proceedings about teaching evolution in schools. Of course, Xu and co-workers’ finding only deepens the impact of Archaeopteryx by highlighting the rich evolutionary nexus of which it is a part, but how the ever-clever creationist community will ‘spin’ it remains to be seen.”1

There’s no need for “spin.” It is not even clear whether this creature had true feathers. The researchers merely found “faint feather impressions” and “some faint integumentary impressions,” and admit, “Unfortunately, the feathers are too poorly preserved for details of their structure to be apparent.”2 The paper did not describe or picture any distinctive feather characteristics, such as rachis and barbs.

Furthermore, these classifications are based on antibiblical assumptions about common biological history based on physical similarities. Also, the researchers admit that the available evidence is very poor: “Our phylogenetic hypothesis is only weakly supported by the available data.”2

The Bible explains that God made every kind of flying creature on Day Five of Creation Week, and then He made the land animals on the next day (Genesis 1). While the different kinds of creatures display marvelous diversity, they are still different created kinds. 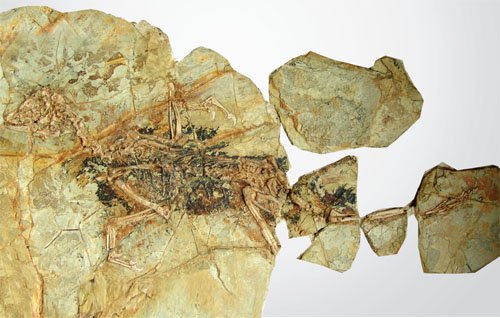 Next Article Burned by Global Warming