Does the Fossil Gibbon in the Gap Monkey with Human Ancestry?

A new gibbon-like fossil is called the missing chapter in human history, but it is not our long lost cousin.

The fossil Pliobates cataloniae could upset the accepted evolutionary concept of our remote family tree, or at least the shape and size of its occupants. Seventy fragments of the gibbon-like ape’s skull and left arm were recovered from a landfill in Spanish Catalonia near Barcelona. The scientists who put this Humpty Dumpty together again estimate that in life it weighed only 8–10 pounds. They nicknamed it “Laia”—short for “Eulalia,” the patron saint of Barcelona—because they believe it sheds light on the common ancestor supposedly shared by monkeys, apes, and humans.

“Pliobates enlightens our understanding of how this ancestor would have looked, in particular by suggesting that in several respects, such as skull shape or body size, it would have been more similar to gibbons than previously thought,” says David Alba, lead author of the study of Pliobates published in Science.1 Staking his claim for the fossil’s evolutionary significance, he adds, “Being at the root of apes, including humans as well, means that in terms of kinship, the new genus is more closely related to extant apes and humans than previously known basal apes.”2

The Missing Chapter in Ape and Human History?

Evolutionary scientists believe that Old World monkeys and apes diverged from a common ancestor 25–30 million years ago. They believe that apes (hominoids) later split into a line of “lesser” apes (like gibbons) and a separate line of “great apes” (hominids).3

Great apes are bigger. “We used to think that small apes evolved from larger-bodied apes,”4 says coauthor Sergio Almécija. “These remains clearly belong to an ape, but they are so small. Maybe some early ape ancestors were smaller than we thought,” adding, “This fossil discovery is providing a missing chapter to the beginning of ape and human history.”5 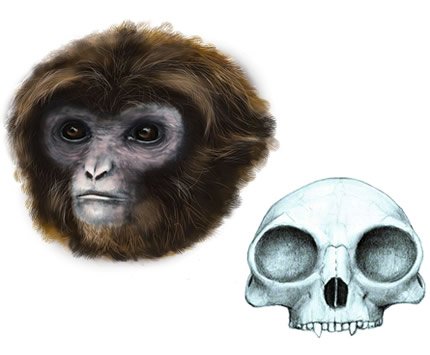 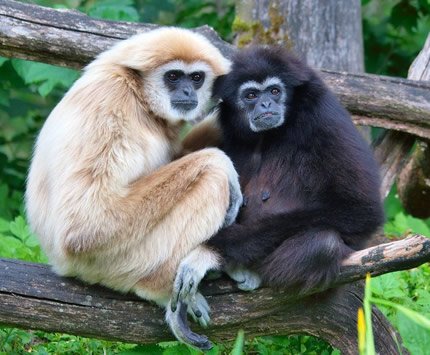 “Meet Your Gibbon Cousin” exhorts the journal Science, as it shows the reconstructed skull of Pliobates, a newly discovered gibbon-like ape with goggle-eyes. The artwork to the left shows how the animal might have looked in life, quite similar to these gibbons peering out at our modern world. But though Pliobates’ discoverers believe the small ape sheds light on the size and shape of a remote human ancestor, there is no ape in our biological past. Digital reconstruction from Institut Català de Paleontologia Miquel Crusafont (ICP) and artwork by M. Palmero reproduced from Science. Photograph of gibbons at Salzburg Zoo by user “MatthiasKabel” via Wikimedia Commons.

With a large ear canal, goggle-like gibbon-y eyes, and a standard-issue modern funny bone, Alba and Almécija’s team report that their ape is a mosaic of primitive and modern features. Some of Laia’s—or Pliobates’—so-called primitive traits match those of pliopithecids6—primates thought to predate the presumed divergence of monkeys and apes earlier than the 11.6 million year date assigned to Pliobates and much, much earlier than the supposed chimp-human split around 6 million years ago.

Laia’s reconstructed face, with its big, round orbital rims, looks like a modern gibbon’s. A gibbon (aka Hylobates) is a “lesser ape.” And like gibbons, Laia could turn its wrist to hand-walk across branches. As shown in the illustration, Laia’s elbow varied slightly from the modern gibbon’s in that it lacked the pronounced ridge that helps stabilize a modern ape’s elbow while hanging from branches.9 Laia’s scientific name—Pliobates—was coined as a combination of pliopithecids and Hylobates, since it seems to the authors to be a mosaic of modern gibbon and a primitive common ancestor of both apes and monkeys. 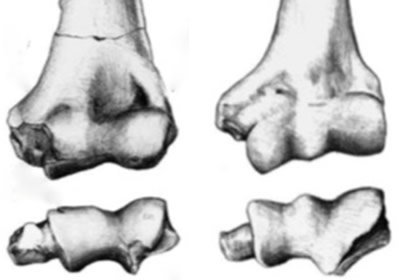 This is the lower end of the upper arm bone of Pliobates (left) and a modern gibbon (right), as pictured in the study in Science. The spool-shaped end, shown from a different angle in the bottom pictures, is called the trochlea. The trochlea is the hinge on which the elbow turns. Gibbons and great apes have a ridge running diagonally across the trochlea. This “lateral trochlear ridge” makes their trochlea look like two spools stacked end to end, as seen in the gibbon’s elbow on the right. The elbow of Pliobates (left) lacks the pronounced ridge. This ridge improves the elbow’s stability when the animal is hanging from a branch. Images reproduced from Alba et al., “Miocene Small-Bodied Ape . . . ” doi:10.1126/science.aab2625.

The authors are convinced that their fossil has great evolutionary significance. It may, however, be nothing more than a variety of gibbon. Brenda Benefit and Monte McCrossin, authors of a Science commentary about Pliobates, point out that “Another possibility is that Pliobates is ancestral only to gibbons.”10 They add, “Whichever interpretation is true, convergent evolution must have occurred in ape evolution, given the combination of primitive and derived traits in Pliobates.”11 There is no way to draw the lines of evolutionary ancestry in such a way as to explain all the subtle traits the study’s authors identified as the result of inheritance.

Like Robert Frost’s “Two roads diverged in a yellow wood,” even the imagined abilities of evolution “could not travel both.”12 In the evolutionary scheme of things, once an evolutionary line splits, the only way for creatures in separate branches to evolve the same new feature is to do it independently. Evolutionists call this convergent evolution—the idea that the random processes of evolution came up with the same novel solutions to life’s challenges over and over again.

Convergent evolution provides an easy way for believers in evolution to explain discrepancies.

Pliobates is a hitherto undiscovered variety of ape, one very like a modern gibbon. It may well be nothing more than an extinct variety of gibbon. Observational science has never shown how one kind of animal could acquire the genetic information to evolve into another more complex one. Biological observations continue to affirm what we learn in Genesis. God created all kinds of animals in the beginning, and they have only reproduced and varied within their created kinds ever since. Baraminological analysis suggests that gibbons and great apes are different created kinds of animals.15 There is no need to try to figure out how they are ancestrally related.

While discovering nothing about ape evolution, the discoverers of Pliobates have also discovered nothing whatsoever about human ancestry. God in the beginning, the same day He created land animals, made man and woman in the image of God, unique from all animals despite any biological similarities. Biological similarities are not at all unexpected but are the common designs of our common Designer, God. And the enormous differences between apes and humans genetically, biologically, cognitively, and behaviorally serve to highlight the biblical truth that only humans are made in the image of God and are not a product of evolution.

Evolutionary scientists are very concerned about parsing out how humans are related to everything near and far. We constantly hear of their debates about which australopithecine apes evolved first and which had more human traits. We are bombarded with overblown accounts of our genetic similarity to chimps and gorillas. Bonobos become the standard by which the history of humanity’s moral compass is gauged. The roots of language—uniquely human—are sought in bonobo babbling, birdsong, bookish baboons, and the gestures and shrieks of chimpanzees. Humanity’s most ancient relationships are sought among “Loki,” supposedly “your closest-known prokaryote relative”16 (a bacteria we discussed in “Does ‘Loki’ Show How Humans Evolved from Single-Celled Organisms?”), and even in stardust, a topic Ken Ham explored in “Students Told to Worship the Sun?”

Evolutionists . . . are speculating imaginatively within their own unverifiable worldview using their fallible minds and demanding of biology feats science has never shown it could perform.

Evolutionists credit creative bacteria, noxious hydrothermal vents, and stardust with our origins. They claim that ape-like animals grew bigger brains and became human because they came down from the trees, cooked their food, and learned to walk on their own two feet. In all of this they are speculating imaginatively within their own unverifiable worldview using their fallible minds and demanding of biology feats science has never shown it could perform. In all this they are also denying our Creator God the glory He deserves for His creation (Revelation 4:11).

Furthermore, by refusing to believe the eyewitness account God has left us in His Word, they are ignoring the most important relationship human beings need to know about. Even those Christians who think God used evolution are refusing to take God at His word by denying the eyewitness account of our origins provided in the Bible. Whether this extinct goggle-eyed ape had a funny bone and whether a chimp can be trained to awkwardly walk on two legs are interesting enough points of pure biological knowledge, but they have nothing whatsoever to do with our historical human relationships.

Previous Article Deep Time and the Christian Worldview Next Article Did the Human Brain Evolve the Ability to Evolve ?