What’s in a Look?

Envision this: you or a family member has been desperately wanting a dog. You have dreams and expectations of snuggling together on the rug in front of the fireplace, going for long walks, and playing fetch in the backyard. Heading to the nearest animal shelter, you hear the barks and yips of dogs all looking for a forever home. You walk up and down the rows of cages gazing at these furry friends, but how do you know which is the “one?”

Then you see it, that pooch with the big eyes just staring at you with “puppy dog eyes.” Your heart melts, and you head to the front desk to fill out paperwork. What is it about that “look,” that bonds us to these four-legged creatures? Scientific American recently published an article that looked at the difference in eye contact times between domesticated dogs, dingoes, and wolves.1 They hypothesize that the difference in the length of eye contact of these three canids infers an evolutionary progression to today’s modern dog. 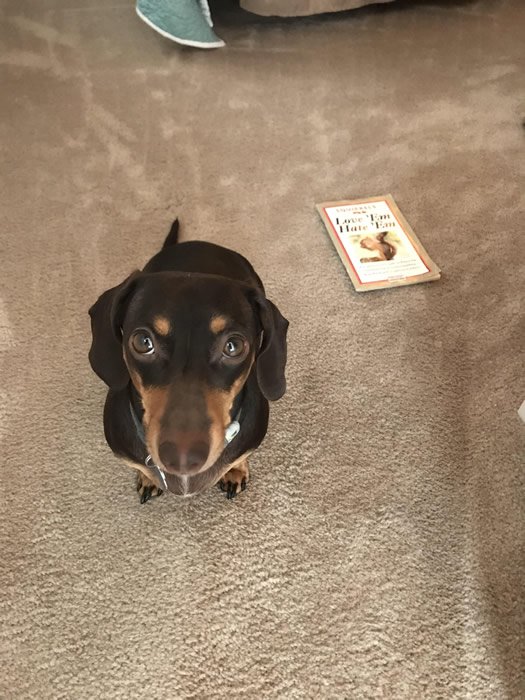 Evolutionists generally believe that today’s companion dog evolved from wolves or from a common ancestor of wolves. In this study they used dingoes as a stepping stone since the dingoes of Australia can be traced back to domesticated dogs that got loose, returned to a feral lifestyle, and created their own population separate from those that remained with their human handlers. They studied how long a dingo would hold a human handlers gaze and compared it to previous studies of wolves and dogs holding a handler’s gaze. They found that dingoes will hold a gaze approximately three seconds longer than a wolf that holds for less than a second, but shorter than a dog that will hold upwards of 40 seconds. Does this difference in eye contact times prove an evolutionary progression from one to another?

What Makes a Look?

Domesticated dogs, dingoes, and wolves, all being canids, have the same ocular anatomy. Each eyeball sits in its own orbit or eye socket in the skull. The depth of this socket can vary, for instance the shih tzu breed has a very shallow orbit, which gives this breed more of a bug-eyed look. The eyeball can move around in the orbit because of multiple different muscles. The rectus muscles (dorsal, lateral, ventral, and medial) and oblique muscles (dorsal and ventral) all help rotate the eye within the orbit. The rectractor bulbi draws the eyeball further into the socket. The levator palpebrae raises the upper eyelid. The blink reflex that helps protect the eye also utilizes the orbicularis oculi, retractor anguli oculi, and corrugator supercilii. Dogs have a lacrimal gland that produces tears to help clean and protect the eye. They also have a nictitating membrane, more commonly known as the third eyelid that also works to protect the eyeball from foreign debris. All these structures allow a dog’s eye to move around, lock onto a visual target, and be able to hold the target in its field of view for the desired amount of time. 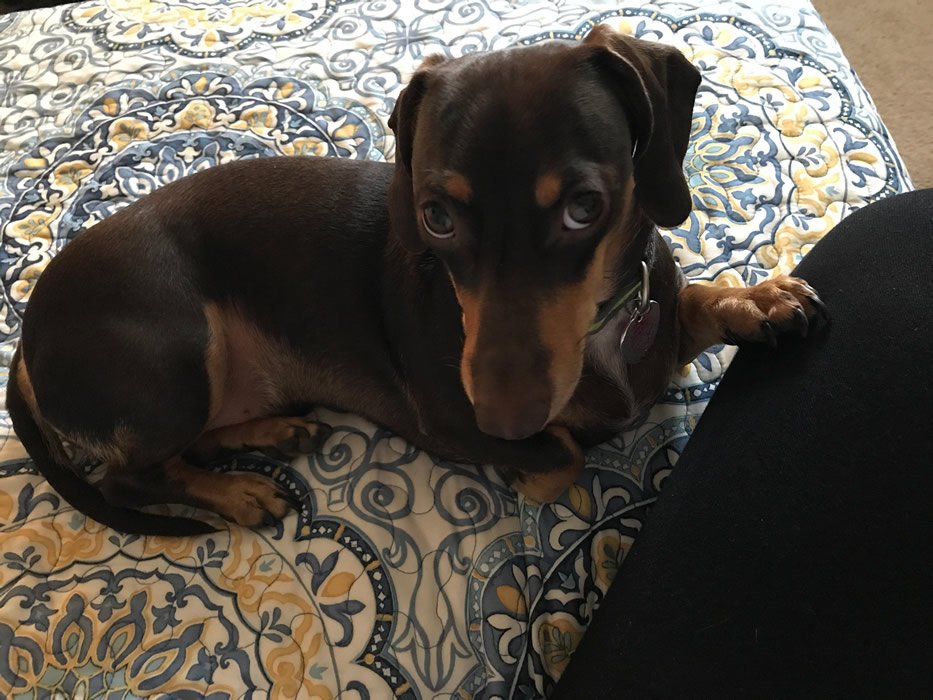 The Meaning Behind a Look

A look is more than a look. It creates a bond between two individuals. The most popular example of this is a baby and its mother. When it is born, a baby is only able to visually focus far enough to see his mother’s face while he is feeding. The look between these two releases hormones in the mother that help her bond with her baby. Past research into eye contact between dogs and humans shows dogs also invoke this hormone release when making eye contact, creating a deeper bond between human and dog.

A look is more than a look. It creates a bond between two individuals.

The difference in the amount of time that each canid holds its handler’s gaze is not a difference of anatomy but that of behavior and sometimes training. Dogs will hold a stare with other dogs to show dominance over another dog. This is one of the reasons doing eye exams on canine patients can be difficult because staring into their eyeballs can be perceived as a challenge to their place in the pack. Even among certain breeds of dog we see a difference in the amount of time a dog looks at its handler. A prime example is the border collie. A working border collie that is herding sheep does not watch the handler but the sheep it is supposed to be working. Their communication is primarily done with vocal cues, so a border collie that stares at its owner is not necessarily a benefit. This same breed is also known to be a great competitor in the dog sport called agility. In this sport, dogs follow mostly visual cues to run through an obstacle course. Keeping eye contact with their handler then becomes more vital. In the case of the border collie, the amount of eye contact time can be based on training.

Through the years, man has selected for a variety of traits in dogs, leading to the development of today’s numerous breeds. Their willingness to keep eye contact with a handler may have been part of the criteria breeders were selecting for to get more or less human-focused canines. The results are still the same—these are all dogs despite their varying amount of visual attention. The “look” is physically the same, but natural variations in disposition/behavior may be more desirable when looking to work with specific individuals. This selection criteria in breeding does not equate to the next step in evolution, just variation within the canids that may have helped with domestication. 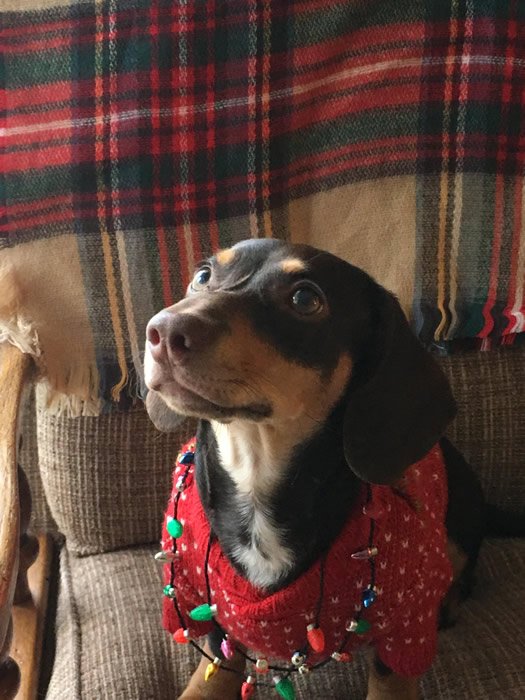 The History of the Human/Animal Bond

Human’s working side by side with dogs is not something new, but when were dogs domesticated? The New York Times reported on the existence of multiple rock carvings that highlighted humans working with dogs to hunt or to take care of herds of animals.2 Some of these carvings even show the use of leashes. Secular scientists are dating these pictures at 8,000–9,000 years ago. Through its extensive genealogies, the Bible shows us that the earth is only about 6,000 years old, so when did humans fall for those puppy dog eyes? Genesis 1 and 2 talk about the creation of all the animals and their being named by Adam in the Garden of Eden. The canids being land animals would have been created on Day Six just like Adam. Adam’s naming of the animals shows human-animal contact, but we cannot infer that these animals interacted with Adam like we do with domesticated animals today. We are told that everything ate plants and that there was no death prior to Adam and Eve disobeying God by eating of the tree of knowledge of good and evil. Adam and Eve were able to interact with all the animal kinds in the garden. We do not know if Adam and Eve had preferred animal companions or if they worked with the animals to tend the garden. What we do know is that after their exile the creation, including the animals, would never be the same.

The sin of Adam and Eve had alienated them from God and from creation.

The sin of Adam and Eve had alienated them from God and from creation. Relationships would have to be rebuilt and they would never be as fulfilling as what they had been in the garden. We see in Genesis 4:2 that Abel was a keeper of sheep. There is no mention of a dog helping Abel, but this would be an example that even by the second generation of humanity we were domesticating some animals like sheep. Job does mention “dogs of my flock,” (Job 30:1). Job lived after the Flood and before the time of Abraham, so we have an indication that by the time God calls Abraham (Genesis 12) humans and dogs already have a working relationship.

The dogs Job might have worked with would have come from the pair of canids that disembarked Noah’s Ark. These would have multiplied, so it would not be surprising that of all their offspring, the ones that interacted more with humans to invoke the bonding response would be chosen to be companions for our early ancestors.

This picture of humans and dogs bonding is a simplified but sweet reminder of what God desires for us. Just as the variety of domesticated and wild dogs has a spectrum of dispositions, God knows us all. He knows each of us and desires a relationship with us. He wants us to look to him in all circumstances. In this world it is easy to look at everything and everyone other than God, but he patiently waits for us. Will you set your eyes on God and accept his free offer of love and salvation for all eternity?