Caretakers of the Underwater Forest

If you’ve ever watched an otter at play, you’ve probably heard someone squeal, “Adorable!” Fun-loving and playful on the surface, they serve a critical role in the Creator’s underwater gardens—they’re the guardians of His kelp forests.

Watching sea otters from the shore can be a lot of fun. Floating on their backs while leisurely eating dinner, these soft, furry creatures give the impression that they are on permanent vacation. But, as with so many other things in God’s created world, there is a much bigger story here.

Sea otters are, in fact, very busy animals. They serve as the caretakers of vast undersea forests made of giant seaweed “trees,” called kelp. These plants, which can grow a foot or more in one day and reach 100 feet (30.5 m), are teeming with life and need careful management. Since the sea otter plays a vital role in the survival of this community of plants and animals, it is called a “keystone species.”

Sea otters like to live near the kelp, which grows in the clear waters near the shore. Over 300 different kinds of animals live in the kelp forest, and many of them feed on it. Some creatures like the kelp a little too much, however. For example, armies of prickly sea urchins have been known to destroy large kelp forests in a matter of months. One way sea otters help keep the forest intact is by eating the urchins. 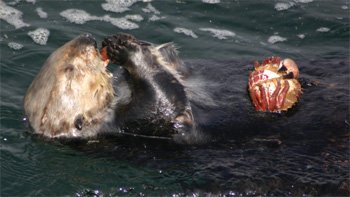 Built-in dinner table: Sea otters float on their backs and rest their food on their stomachs as they eat.

While animals ate only plants in the original world before Adam’s sin, today some ravenous animals would destroy their food sources if left unchecked. Since the curse, sea otters help control the population of the animals that eat kelp, such as crabs, abalones, and the purple sea urchin.

But reaching these creatures is difficult because they live near the sea floor, and some are anchored to rocks. So the otter depends on its superior diving skills, sensitive whiskers, and special paws to detect and remove its prey.

The nimble otter can swim faster than many competitors, and it can even pick up rocks to hammer creatures loose from the sea floor. Because they must eat almost continually to keep their energy up, otters can’t stop hunting when the sun goes down. So God equipped them with “night vision goggles”—reflective crystals at the back of their eyes. These crystals allow the eye to gather more light when the water is murky. Such a brilliant design would have helped them harvest plant food even before the Fall.

Sea otter fur is one of the densest and most amazing furs in the animal kingdom. Sea otters, unlike other mammals that live in the sea, do not have any blubber or fat to keep them warm. Staying warm is especially critical in the cold Californian and Alaskan coastal waters. (This is one reason otters must eat 10–15 pounds [4.5–6.8 kg] of food a day!)

The hairs of their fur have grooves and actually interlock. This creates an airtight compartment, which not only provides insulation but also traps air to increase buoyancy. In fact, mother sea otters clean the fur of their young and blow air into it so they won’t sink. Adults also blow bubbles or roll briskly in the water to help get air into their own coats. To ensure that their hairs will continue to interlock, otters are constantly grooming. 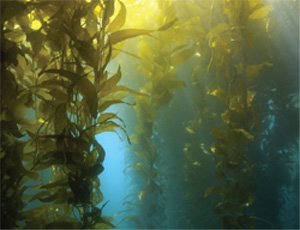 The kelp forest shelters more than 300 different animals and feeds many of them. By eating creatures that eat kelp, sea otters help control the population of animals that could potentially destroy the kelp forest.

Sea otters spend a lot of time in the water—they can even sleep while floating on the water—so they must find other ways to keep warm. Since their paws and webbed feet have very little warm fur, they try to keep them out of the water when not swimming. It is amusing to watch them roll in the water trying to keep their paws up or place their paws behind their heads in a restful pose. To avoid being swept away by ocean currents or waves while they are sleeping, sea otters will wrap themselves in kelp fronds, or they will hold onto each other in big rafts.

When keystone species falter, others around them suffer. One animal that once benefited from the sea otter’s presence was the Stellar’s sea cow, a relative of the manatee that once lived in the kelp forests. These large but gentle creatures were hunted to extinction in the 1700s. Some biologists believe that the hunting of sea otters for their pelts contributed greatly to a reduction in the sea cows’ numbers. With fewer otters to control them, urchins multiplied and destroyed the kelp forests, leaving little for these giants to eat.

This delicate balance is evidence that our merciful God created His creatures to interact in dynamic communities, even in a fallen world, depending on one another to flourish even in harsh conditions. Despite the curse, we can still see hints of God’s original designs for the lowly seaweed and the furry sea otter—the caretaker of His underwater sea forests.