Naked mole-rats are highly social, cold-blooded, subterranean mammals. They live much longer than most rodents and are pain resistant, cancer resistant, and suffocation resistant. These characteristics naturally intrigue scientists wanting to help people live longer, healthier lives. The naked mole-rat’s decreased sensitivity to pain, for instance, results from a mutation affecting nerve function, and study of this mutation may reveal ways to decrease chronic pain in people.1 The latest naked-mole-rat discovery has awakened hopes for innovative medical interventions for heart attacks and strokes. These are events that damage the heart and brain through oxygen deprivation. 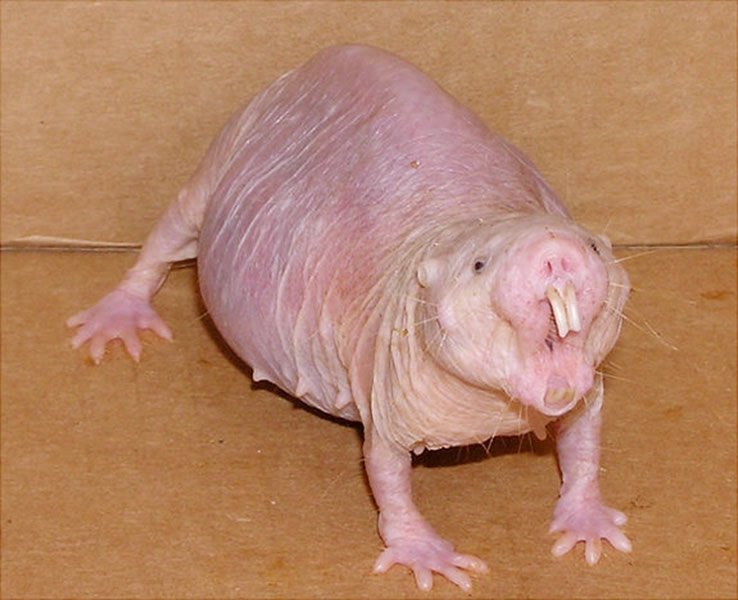 The naked mole-rat has a social structure similar to that seen among bees and ants. There is a queen—like this female—with several mates, and a hive-like underground colony of sterile workers. They dig long tunnels to reach underground tubers, their primary source of food. IMAGE: Image by Jedimentat44 on flickr, CC BY 2.0.

Naked mole-rats live in heavily populated underground colonies. Huddled together in their burrows with poor ventilation, they use up oxygen supplies and fill the air with high levels of carbon dioxide. Hypoxic conditions are particularly intense for animals on the bottom of a large mound of mole-rats. Instead of dying, they conserve energy by going into a sort of suspended animation while switching their cellular metabolism to burn fructose for energy. This metabolic pathway does not require oxygen, and it supplies the heart and brain with enough energy to keep going until oxygen is resupplied. Eventually the naked mole-rats on top awaken and move off to find edible underground tubers, letting their sleeping buddies get a little air. With a puff of fresh air, all awaken with no ill effects. 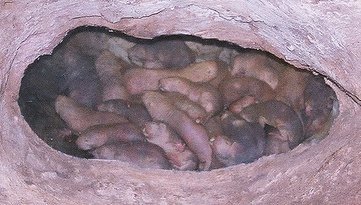 Naked mole-rats huddle together in their burrows. This crowded arrangement might suffocate other animals, but the naked mole-rat is metabolically equipped to survive oxygen deprivation and high levels of carbon dioxide. Image by Edward Russell at flickr, via Wikimedia Commons.

Don’t Try This At Home

Neuroscientist Thomas Park of the University of Illinois, Chicago, has been studying the unique features of the naked mole-rat for many years. To test the animal’s hypoxic resilience, his team exposed them to low levels of oxygen that humans cannot survive. Our atmosphere contains about 21% oxygen, and we need at least 10% to survive. Naked mole-rats subjected to levels as low as 5% snoozed with low heart rates and slowed breathing for 5 hours and awoke with no ill effects. Mice under those conditions died within 15 minutes.

To push the envelope a little farther, naked mole-rats and mice were placed in a completely oxygen-free chamber. Mice died in less than a minute. Naked mole-rats went to sleep and slowed their breathing dramatically. And though left in the chamber for a full minute after they completely stopped breathing, they revived immediately when exposed to fresh air and returned to their colony with no problems. Naked mole-rats can survive an amazing 18 minutes without oxygen.

How does the naked mole-rat accomplish this remarkable feat? Park explains, “The naked mole-rat has simply rearranged some basic building-blocks of metabolism to make it super-tolerant to low oxygen conditions.”2

Animals and people do not ordinarily utilize fructose directly as a fuel. Like glucose, fructose is a sugar molecule containing 6 carbon atoms, 6 oxygen atoms, and 12 hydrogen atoms, but the atoms are arranged differently. Most energy-producing enzymes in mammals are designed to metabolize glucose, not fructose, as their sugary fuel. Your brain and active skeletal muscles are particularly dependent on glucose for their energy needs. And God has designed most of your other organs and resting muscles to happily utilize fatty acids for energy, saving much of your valuable glucose for thought and flight.

God has designed most of your other organs and resting muscles to happily utilize fatty acids for energy.

You consume fructose if you eat fruit—especially apples and pears. Honey contains both fructose and glucose. Table sugar is sucrose, a two-unit sugar molecule consisting of both glucose and fructose, so you also consume fructose indirectly when you eat table sugar. Many processed foods contain a great deal of fructose in the form of high-fructose corn syrup, which many health-conscious people avoid.

Most of the fructose sugar in your diet is processed in the liver, where it is typically turned into fat or into another fuel storage molecule called glycogen.3 In fact, other than cells in the intestine, liver, and kidney, most mammalian cell types do not ordinarily allow fructose to enter them, unlike glucose. So what is going on at the cellular level in the naked mole-rat?

Fructose as an Emergency Fuel

Metabolism of fructose for energy requires the cell to bypass an enzymatic step that ordinarily regulates the amount of energy produced from glucose. This allows energy production to proceed at maximum speed so long as fructose is available. As in all metabolic pathways, there are many enzymatically controlled steps. The rate-limiting step in glucose metabolism involves the enzyme phosphofructokinase (PFK), the activity of which is tightly regulated.6 This is one way a cell’s metabolic rate is regulated to meet energy needs efficiently.

The fructose-using metabolic pathway is not subject to such regulation. Park and colleagues report in Science, “The naked mole-rat has evolved the ability to use fructose to fuel vital organs such as the heart and brain under near-anaerobic conditions. This metabolic rewiring involves equipping metabolically active organs with transporters and enzymes that metabolize fructose to lactate using a pathway that bypasses metabolic block at PFK.”7

Switch On, Switch Off

What is it that causes the fructose-utilizing systems to switch on as needed and just as readily switch off? That has yet to be discovered.8 However, if naked mole-rats are anything like people, it is important that fructose fueling does switch off once the anoxic situation ends because fructose fueling might cause damage if it continued unabated for a long time. Park and colleagues explain, “Fructolysis [the breakdown of fructose] in mammals is normally largely restricted to the liver and kidney.”9 In humans, they explain, “A switch to fructose metabolism under hypoxic stress has been associated with cancer malignancy, metabolic syndrome [obesity with high blood pressure, fatty liver, and insulin resistance], and heart failure. It is thus important to understand how naked mole-rats utilized fructose metabolism with no apparent physiological drawbacks.”10

So has evolution equipped the naked mole-rat uniquely among mammals for its subterranean life? Has the naked mole-rat taken a turn toward the plant kingdom in its evolutionary quest to survive? Not at all. The naked mole-rat is equipped to survive anoxic conditions because its heart and brain cells switch on expression of the genes to transport and utilize fructose under anoxic conditions. Those genes are the same genes found in many mammals, but they usually remain unexpressed. Their existence is not explained by evolution—which fails to explain the origin of the information in any genome—but by the fact that all living things share a common Designer—the Creator God described in the Bible. Many genes and many metabolic processes are therefore common to a wide variety of living things. That these genes can be expressed in response to low oxygen conditions is a variation that makes these mammals ideally suited to densely populate an ecological niche that would otherwise be virtually off limits to them.

What about other mammals? What about humans? After all, fruit and honey are good for you! And we, like all animals, were originally designed for a botanical diet. Yet our livers efficiently convert that fructose into fat, especially if we consume a lot of it, and nobody wants to be fat! Why didn’t God just give us the ability to utilize fructose for fuel?

Well it turns out that the biochemical pathways that metabolize fructose for an energy source are not tightly regulated, as the glucose pathways are. If fructose routinely fueled our heart cells, for instance, evidence suggests our hearts would grow too large and soon fail. In fact, those same genes that are expressed to utilize fructose and save the life of a suffocating naked mole-rat are also switched on in human heart cells stressed by high blood pressure or valve disease.11 Those heart cells then use their newly accessible fructose fuel to grow a heart too large for your own good! Thus, what is good for the naked mole-rat in its stuffy burrow would be disastrous for the man on the street.

What is good for the naked mole-rat in its stuffy burrow would be disastrous for the man on the street.

God designed each organ in our bodies to utilize the fuel supply that suits it best. He also designed critical organs to adapt to alternatives under adverse circumstances. Thus, the human brain prefers glucose as its fuel, but it can switch to a fuel supply from fat under stressful conditions. Similarly, the stressed heart may have to utilize a fructose fuel supply, even though this is not a good long-term solution.

“Molecular insights into the rewired metabolism of the naked mole-rat may help in devising strategies to prevent hypoxic damage associated with ischemic heart disease and stroke,” write Park and colleagues.12 Hopefully medical researchers can find a way to use the knowledge gleaned from naked mole-rats to help human hearts and brains survive sudden oxygen deprivation without the detrimental effects that a steady diet of fructose fuel would entail. But these things are possible, not thanks to evolution, but thanks to the fact that God is the wise Designer of both naked mole-rats and people.

Previous Article Eroding the Historical Adam: A Response to Adam and the Genome Next Article The Creation of Adam: Unique Revelation or Ancient Myth?