Ready to Take the Heat

One of the most fascinating ways to study the character of God is to study His creation. 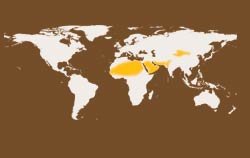 Camels are native to the desert regions of North Africa, the Middle East, North India, and Mongolia.

From galaxies to molecules, “God’s invisible qualities—his eternal power and divine nature—have been clearly seen, being understood from what has been made” Romans 1:20 (NIV). The camel is a sure crowd-pleaser at the zoo, with its loping gait and comical expressions, but a closer look at this unique animal reveals a surprising design that points directly to an omniscient Creator.

Camels belong to the family Camelidae, along with their new-world relatives llamas and alpacas, and they are divided into two species: Camelus bactrianus, or Bactrian camel, and Camelus dromedarius, or Dromedary camel. The Dromedary, also called the Arabian camel,1 has long been referred to by Bedouins as “God’s gift.”2 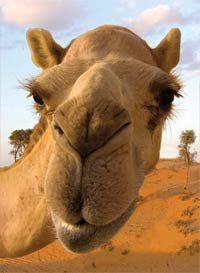 A camel’s thick eyebrows and double row of eyelashes keep sand out of its eyes. These are just two amazing features God designed for the camel to survive in its post-Fall habitat.

From their nose to their feet, camels are perfectly suited to their desert environments: the harsh, hot winds and sand of the deserts of Africa, the Middle East, and Asia.

To protect them from sandstorms, camels were given nostrils that they can open and close; they also have bushy eyebrows, fur-lined ears, and double rows of curly eyelashes for the same protective purpose. The tough, leathery skin on their knees pads the joints as they kneel, and their special foot pads spread as they walk, to keep them from sinking into the sand.

Even more remarkable is the camels’ ability to withstand the intense, arid heat of the desert. Unlike any other mammal, camels can raise and lower their own body temperature, thereby conserving precious water.3,4

A camel’s hump, or humps, once popularly thought to contain water, in fact contain fat that is used as fuel when food is scarce.

Camels also have a unique metabolism that allows them to store enormous amounts of water in their bloodstream, while oval-shaped red blood cells, exclusive to the camel, tolerate both dehydration (lack of water) and osmosis (storing water).5 Camels can drink more than twenty gallons of water in a ten-minute period—a feat that would kill almost any other mammal—then store the water in their blood for up to two weeks.3 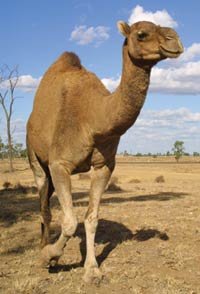 The Dromedary camel is designed for the arid deserts of Africa and the Middle East. You can tell a Dromedary from a Bactrian by the number of humps the camel has and the length of the camel’s hair. 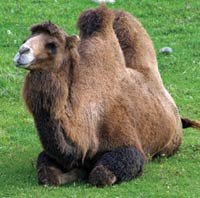 The long, shaggy hair of this Bactrian camel makes it suited for its life in the deserts of northern India.

Two obvious differences between the Dromedary and the Bactrian camels are the number of humps and the length of their hair. A one-hump camel is a Dromedary, and a two-hump camel is a Bactrian. The Dromedary has relatively short hair, enabling it to live in the extreme heat of the Arabian Desert. The Bactrian camel has long, shaggy hair, better suited for the cooler temperatures of Asia.

A camel’s hump, or humps, once popularly thought to contain water, in fact contain fat, which is used as fuel when food is scarce. Metabolizing this stored fat is also how camels utilize the water stored in their bloodstream. So, the misconception that the hump contains water is not so far from the truth after all! Camels can live without food for up to a month, by which time their hump, or humps, have become floppy and fallen to one side. However, the hump is restored when camels feed and build up their fat storage.

But how did the camel come to be suited for such a harsh, hot, sandy environment? A common misconception among evolutionists is that creationists believe God created each animal exactly as we see it today. But if this were true, many of the camel’s design features would have been at best superfluous in the “very good” world of the Garden of Eden.

In Genesis 1:24, God said, “Let the land produce living creatures according to their kinds” (NIV). The original camel “kind” would have contained in its genetic code the information to produce “modern” camels, as well as their relatives, such as the llama. God, in His omniscience, may have placed in His original perfect creation everything it would need to survive in a world cursed by sin.

The camel’s extraordinary tale of survival in one of the harshest climates is a beautiful testimony to the foreknowledge and amazing creativity of an infinite God who cares deeply about His creation.