Because so many beautiful specimens have been harvested from the Green River Formation, few realize that many of the fish remains are far from perfect. 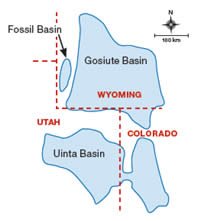 Overview of the Green River lake system in the states of Wyoming, Utah, and Colorado. The fossil fish specimens used in this study were from Fossil Basin in Southwest Wyoming. 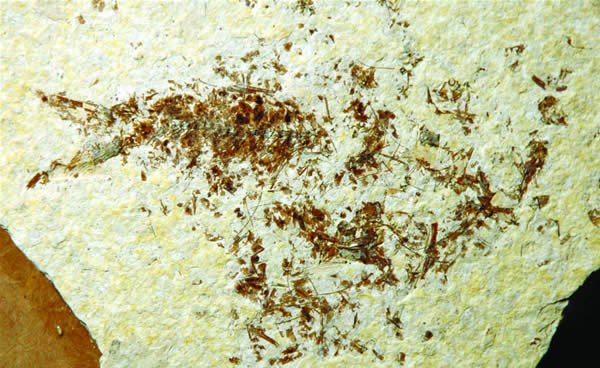 Figure 1
The head of this small fish (Knightia) exploded before the fish was buried. Note that both bones and scales are scattered across the rock. Specimen HCCRT 5-7.1 (click to enlarge)

Figure 2
A nearly perfect specimen of Diplomystus from the Green River Formation of Wyoming. Note that the tail is a little bit “flimsy.” This indicates that some decay occurred before the fish was buried. Specimen FBQ 3-3. 1 (click to enlarge) 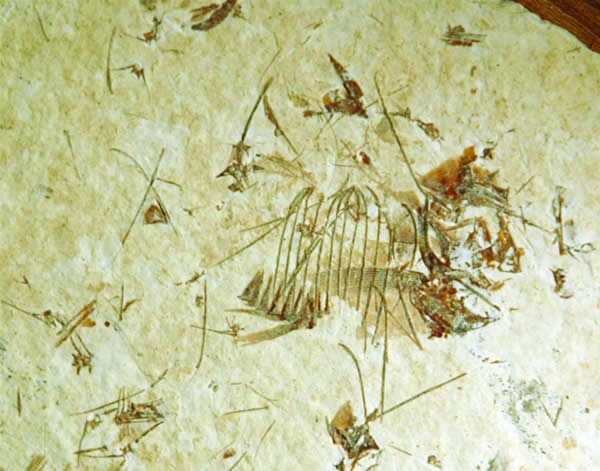 Figure 3
Some fish experience nearly complete decay and disarticulation of their elements before they are finally buried, as in this specimen of Diplomystus from the Green River Formation of Wyoming. Specimen FBQ 3-2. 1 (click to enlarge) 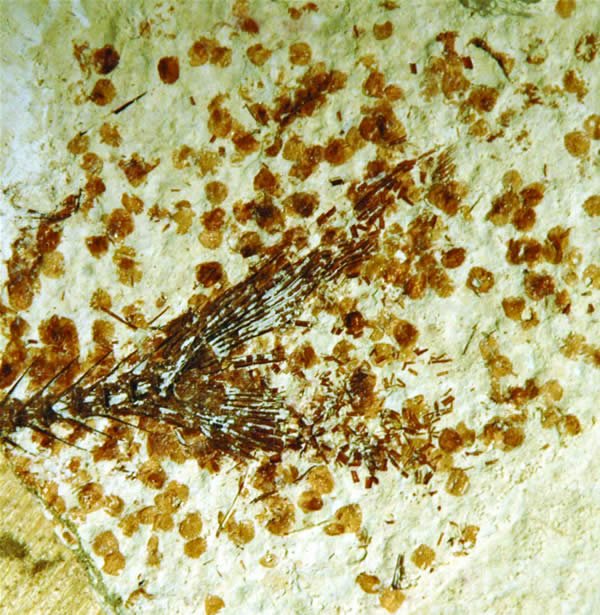 Figure 4
Laboratory experiments show that scales begin to fall off a fish only a few days after death. In this fish specimen (Mioplosus), some of the scales fell off the carcass and were scattered around the fish before it was buried. Specimen WSQ 29-1. 1 (click to enlarge) 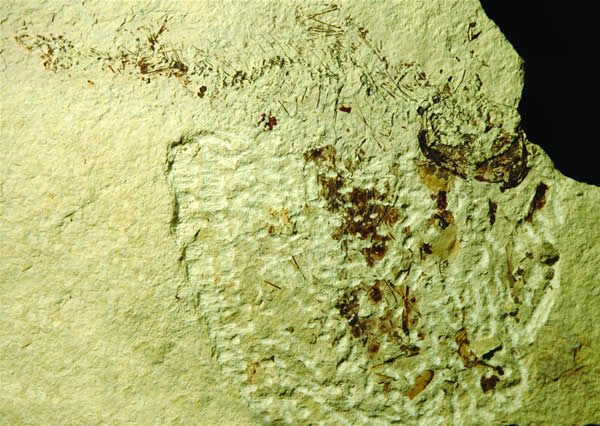 Figure 6
The belly of this small fish (Diplomystus) exploded, causing its back to arch away from the explosion (near the top center of the photo). Notice the scattered bones and scales in the lower right of the photograph. Specimen HCCRT 6-8.1 (click to enlarge) 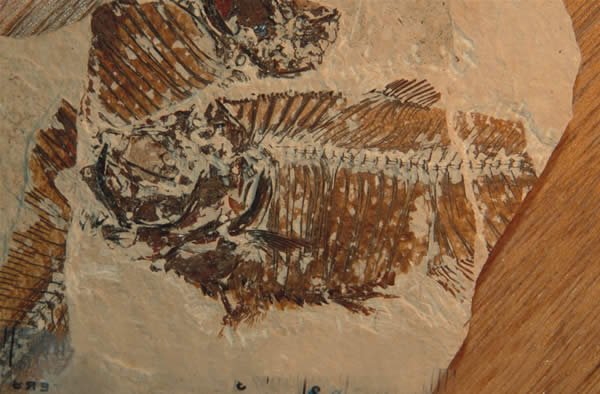 Figure 7
Some fish are almost perfectly preserved, as with this Diplomystus. However, when the fish are examined carefully, slight signs of decay can be noted. For example, look at the lower pelvic fin. Also, note there are a few vertebral elements out of place immediately behind the skull. This might be due to expanding swim bladder gases that ruptured into the brain. Specimen CCQ 3.5-3. 1 (click to enlarge)

The Green River Formation (GRF) of Wyoming (left) contains millions of exquisite fossil fish that are sought by collectors worldwide (Figure 2). Because so many beautiful specimens have been harvested from the GRF, few realize that many of the fish remains are far from perfect. In fact, many of the fish are disarticulated, their bony remains and scales scattered, no longer connected together as when they were alive (Figure 3). Studying fossils and the layers of rocks they are contained within can give us clues as to whether the fossils were formed during or shortly after the worldwide cataclysm popularly known as Noah’s Flood.

What Happens to a Fish When It Dies?

Taphonomy is the study of how living things become fossils. Paleontologists can better understand the fossil record by studying how modern fish rot and decay. Because dead animals rot and decay so quickly, well-preserved fossils can tell us that the rocks they are found in must have been made quickly, as well. Otherwise their remains would have disappeared.

Observations of dead fish in natural settings and in laboratory experiments have confirmed that when fish die, their remains decay rapidly.1,2,3 If fish are not quickly buried and protected from the decay process, they have no chance of being fossilized. This is true for fish that died during the Flood, shortly after the Flood, and today.

Contrary to popular belief, most fish never float after death. Taphonomic research confirms that most sink to the bottom and never resurface. However, many people have seen a dead fish floating in a lake “belly up.” This happens because bacteria in the fish’s gut and swim bladder produce a gas that causes the fish to inflate like a balloon. Experiments reveal that when a fish floats, it cannot float for very long. Many times the belly of the fish will rupture, causing the fish to sink to the bottom.

Even on tranquil lake bottoms, as fish decay, their remains are scattered. In many cases the decay process is complete, leaving no traces of bones. All types of fish remains are exceedingly rare in modern lake settings, and searches for bones and scales in lake mud have often turned up empty.4,5 We can conclude that rocks containing fish remains (fossils) are usually made under different conditions from what we normally see operating today. So, why are there so many beautiful fossil fish specimens from the GRF?

Why So Many Beautiful Specimens?

It is likely that the GRF represents a large post-Flood lake system which rapidly accumulated mud shortly after Noah’s Flood as waters retreated from the continents (Genesis 8). Water pooled in topographic depressions, forming large post-Flood lakes. During this time, rates of erosion and sediment deposition were probably much faster than we see today. However, some creationists believe this mud may have accumulated during the Flood.6

An interesting feature about many of the fish in the GRF is that they show various stages of decay, which have been duplicated in laboratory experiments (Figure 4). Some of the fish appear to have exploded, scattering their remains on the lake bottom before they were buried. Fossil fish have been found with exploded bellies (Figure 6) and heads (Figure 1).

In order for a fish to explode while it is on the bottom, gas must build up within its body cavity, but it must somehow be prevented from floating to the surface. To keep the fish from floating, the fish can adhere to lake bottoms by growths of bacteria, algae, diatoms, and other microorganisms. These growths are often referred to as microbial mats7 and can cover a fish within hours after the fish settles on the bottom.

It is fairly easy to understand why some of the fish fossils have exploded bellies, but why exploded heads? The most common fish in the GRF are the Diplomystus and Knightia. Both are very similar to today’s herring. Many species of fish have a structure called a swim bladder that acts like a small balloon, which helps the fish maintain buoyancy in the water.

In some fish (like the herring and goldfish), a small tube connects the swim bladder to the gut. In the herring, a small tube also connects the swim bladder to structures in the brain that are used for hearing (Figure 5). Bacteria that normally live in the fish’s gut produce decay gases after death. These gases can build up in a fish’s gut and swim bladder after death. Evidently, in the herring, gases can then rupture into the head. In some fish, the disruption is a bit more subtle. If you look carefully at a near-perfect fish, often several vertebrae behind the skull show evidence of disruption (Figure 7).

Experiments and observations of dead fish in modern settings show that they decay within days or weeks after death. Perfectly preserved fossil fish that do not show any signs of decay must have been buried rapidly. Modern lakes normally do not contain fish remains because mud is not accumulating quickly enough within them to preserve the remains. Some fish in the fossil record do show signs of decay, but even those fish must have been buried soon after the decay began. In other words, rapid burial must have occurred in order to preserve their exploded remains in the fossil record.

Scientists have studied decay in fish, as well as many other groups of organisms. These experiments overwhelmingly show that rapid decay takes place in many types of organisms under many conditions.

Rocks which contain fossils show that the rocks must have hardened quickly in order to preserve their fossil remains. When sedimentary rocks are examined, many of them contain exquisitely preserved fossils. Fish fossils and all other types of fossils demonstrate that rocks have accumulated quickly in the past and not over millions of years, as conventional geology teaches.