The Fallacy of Reification

Reification is attributing a concrete characteristic to something that is abstract. Perhaps you have heard the old saying, “It’s not nice to fool Mother Nature.” This is an example of reification because “nature” is an abstraction; it is simply the name we give to the chain of events in the universe. Nature is not a person and cannot literally be fooled, since nature does not have a mind. So, this expression would not make sense if taken literally.

However, when reification is used as part of a logical argument, it is a fallacy. The reason for this is that using such a poetic expression is often ambiguous and can obscure important points in a debate. It is very common for evolutionists to commit this fallacy. Let’s look at some examples of the fallacy of reification as they are commonly used in evolutionary arguments. 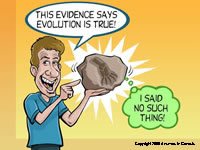 Sometimes in an argument, an evolutionist will say something like this: “Nature has designed some amazing creatures.” This sentence commits the fallacy of reification because nature does not have a mind and cannot literally design anything. By using the fallacy of reification, the evolutionist obscures the fact that the evolution worldview really cannot account for the design of living creatures. (Keep in mind that he may be doing this unintentionally). God can design creatures because God is a person. Nature is a concept and cannot design anything.

“Creationists say the world was created supernaturally, but science says otherwise.” Here the person has attributed personal, concrete attributes to the concept of science. In doing so, he or she overlooks the important fact that the scientists draw conclusions about the evidence and verbalize such conclusions—not “science.” Science is a conceptual tool that can be used properly or improperly. It says nothing. It does not take a position on issues. So, this common example of reification is logically fallacious.

“The evidence speaks for itself.” This expression is quite common, but when used as part of an argument, it is the fallacy of reification. Evidence does not speak at all. Evidence is a concept: the name we give to a body of facts that we believe to be consistent with a particular point of view. People draw conclusions about evidence and verbalize their thoughts. But evidence itself does not have thoughts to verbalize.

“Evolution figured out a way around these problems.” I have a heard a number of evolutionists say something along these lines when attempting to explain some intricately designed biological system. But, of course, evolution is a concept. It has no mind and cannot figure out anything. So, this example again obscures the difficulty in accounting for design in the universe without appealing to a mind. It is a fallacious use of reification.

Natural selection is an example of reification and could be considered a fallacy if used in an argument.

Even the phrase natural selection is an example of reification and could be considered a fallacy if used in an argument. Nature cannot literally select. This phrase is so commonly used that we might not call it a fallacy providing the meaning is understood by all. We do believe in the concept called “natural selection.” Yes, organisms that are well-suited to an environment are more likely to survive than those that are not well-suited. (This is tautologically true and is something that both creationists and evolutionists believe).

But, suppose we asked, “Why is it that animals are well-suited to their environment?” If an evolutionist answered “natural selection,” this would be the fallacy of reification. It poetically obscures the true reason that animals are designed to survive—God.

Previous Article Introduction Next Article The Fallacy of Equivocation